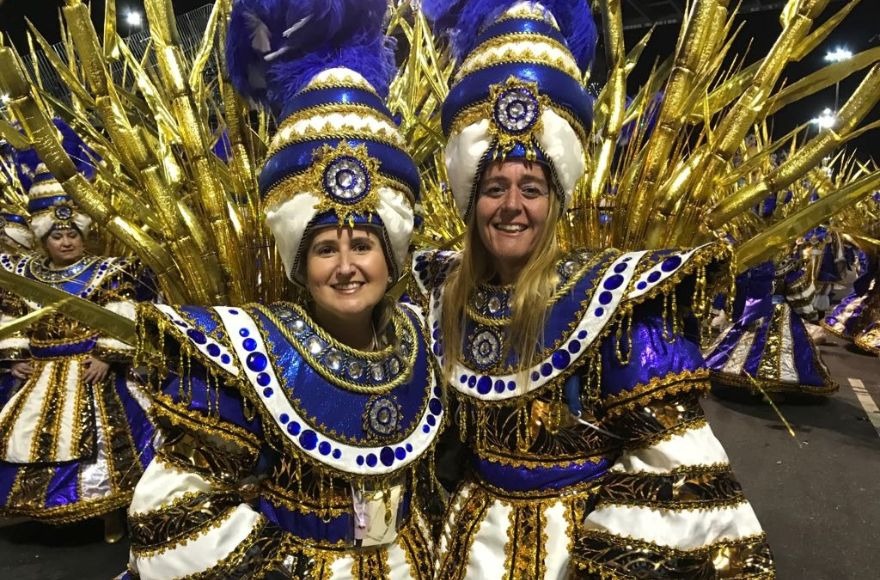 RIO DE JANEIRO (JTA) — The saga of the European Jewish refugees who established the first synagogue in the New World and eventually also North America’s first congregation was celebrated in Rio’s Carnival parade.

A group of 80 Jewish community members joined more than 3,000 Portela samba school performers on Monday night as they paraded along the half-mile street telling the story of the Jews expelled from Portugal, their temporary religious freedom and prosperity in a Dutch-ruled Brazilian region, and their second expulsion leading them to found the Shearith Israel synagogue in New York.

“To us it is very important when someone values the Jewish presence and influence in Brazilian history. It’s a sign of gratitude,” said the Rio Jewish federation’s president, Herry Rosenberg, prior to the parade. Rosenberg had carefully followed preparations for the parade for the federation, which served as a consultant for the performance.

Plush colorful floats and costumes narrated the Jews’ arrival in Recife, where they met Brazil’s northeastern landscape, including typical crops and animals such as sugar cane, crabs and goats. Striking allegories featured the local architecture and atmosphere, including Kahal Zur Israel, the first synagogue established in the Americas, founded by the newly arrived Jews.

“The intention was to show how the past can point us to things about the present and the future. There is a strong message against xenophobia and for peace among peoples,” Fabio Pavao, a Portela director.

The Jewish expulsion from Brazil was depicted by an enormous vessel and pirates, who attacked the group on their way to New Amsterdam, the city they helped found and that was later renamed New York. Skyscrapers, Broadway billboards and a replica of the Statue of Liberty sat on the last float of the parade.

In 1624, the Dutch — who were tolerant of Jewish migration and open practice of religion — took over portions of northeast Brazil. In 1637, the Jews built the Kahal Zur Israel synagogue in Recife, which was closed by the Portuguese when the Dutch were expelled in 1654. It was reopened in 2002 and now stands as the oldest existing synagogue in the Americas, housing a Jewish cultural center and museum.

“This rescue of the history of the Dutch period in Brazil reminds us of a vision of respect for differences amidst a period of discrimination and intolerance and brings us to a still current reflection on the issue,” Sonia Sette, president of the Pernambuco Jewish federation, told JTA in the weeks leading up to the parade.

Over 1 million tourists from around the world come to enjoy Carnival in Rio at street parties called “blocos” or at the sambadrome, where 26 samba schools wow some 60,000 spectators. The live TV broadcast is watched by some 208 million Brazilians and reaches some 2 billion viewers worldwide.

Carnival is Brazil’s most popular festival and one of the world’s largest multi-day celebrations. Following a lunar calendar, this year it is being held from Feb. 9 to 14. The celebration ends at noon on Ash Wednesday. Easter Sunday comes 40 days after.

In 2008, a carnival float depicting dead Holocaust victims was banned from Rio’s parade following the request of the Jewish federation, citing the Brazilian law that prohibits Nazi propaganda and racism.

In 2003, the Jewish Culture Center in Sao Paulo was blasted for sponsoring the Mangueira samba school’s presentation about the Ten Commandments at a cost of $1 million. Some Jewish activists criticized the center for being willing to spend so much, charging that the money could be better spent helping financially strapped Brazilian Jewish institutions.

Brazil has the world’s largest Catholic population — nearly 130 million — and is home to some 120,000 Jews.