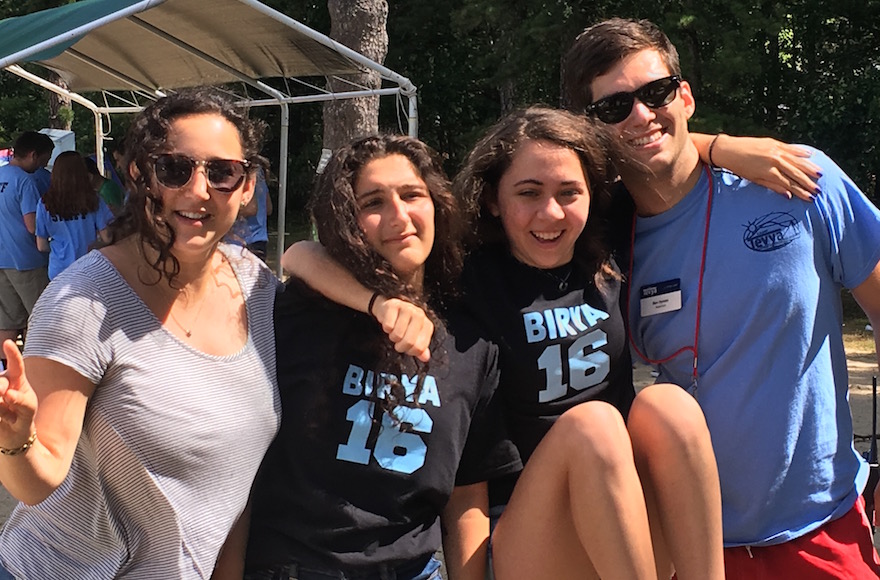 Talia Newfield, second from left, at Camp Tevya in the summer of 2016 with her older sister, Jessica, left, Zoe Saldinger and friend Ben Hyman. (Courtesy of Cathryn Saldinger)
Advertisement

BOSTON (JTA) — A synagogue, a Jewish summer camp and the wider Boston community are mourning two teenage best friends who died over the weekend after being struck by a car.

Talia Newfield, 16, who is Jewish, and Adrienne Garrido, 17, were hit late Saturday afternoon while they were crossing a street near Needham High School, where the two were juniors, in the suburb about 20 miles southwest of Boston. Friends and family remembered the girls as energetic track athletes who were well liked by their wide circle of friends and peers.

Newfield died in a nearby hospital Saturday evening. Garrido’s death at a Boston hospital was announced Sunday evening. No arrests have been made and the case is under investigation, according to a Needham police lieutenant.

Two cars were involved in the accident but no further details have been released, pending the State Police and local district attorney’s investigation.

A funeral for Newfield, the youngest of four siblings, will be held Tuesday afternoon at Temple Aliyah, a Conservative synagogue in Needham, where Newfield’s family have been longtime, engaged members, according to friends of the family. A memorial observance will be held at a later date. Rabbi Carl Perkins met with the family Monday morning, he told JTA in an email.

“This is the worst time of our lives,’’ Newfield’s father, Craig, told the Boston Globe. He made the remarks when he stopped by a makeshift memorial where friends placed bouquets of flowers at the intersection where the teens were hit.

“We want everybody to know that Talia and Adrienne were best of friends. They were unique, they were beautiful people, they were loved by everybody,” Craig Newfield said.

He and his wife, Lisa, are desperate to know the details of the fatal incident, according to the Boston Globe.

“We don’t understand how two beautiful young women can get taken from us in the space of about 20 feet on a clear evening on a flat, straight street in Needham. We just don’t understand,” Craig Newfield said.

In a letter to the school community shared Monday night on the school department’s Twitter account, the Newfield family thanked friends, family and their synagogue for their outpouring of support. They said Adrienne and Talia had “their lives and the world ahead of them.” The letter closed with the Hebrew words “yehi zichra baruch. May her memory be for a blessing,” traditional Jewish words of comfort. 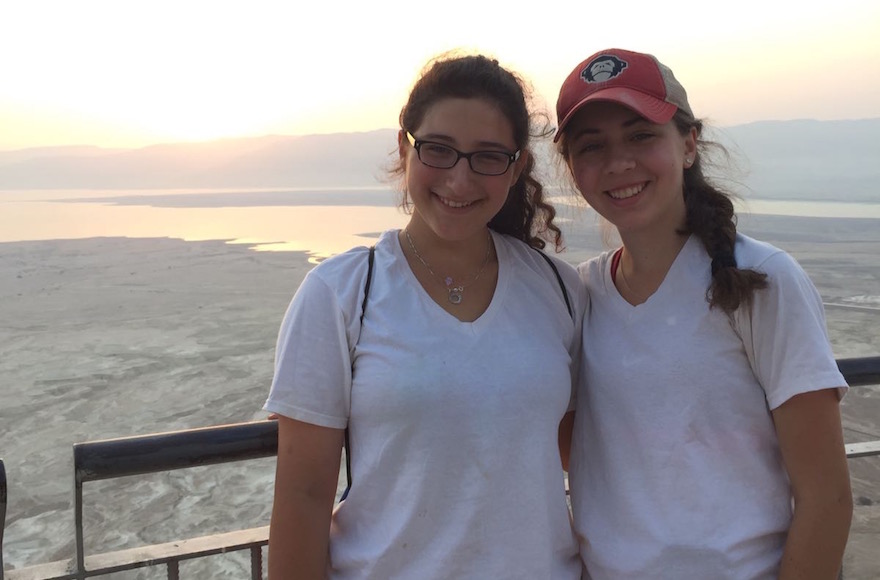 Word spread quickly of Talia Newfield’s death through the Camp Tevya community. Talia had been a camper for many years at the overnight New Hampshire Jewish summer camp. Last summer, Talia traveled to Israel with the camp’s Dor l’Dor program, according to Mindee Greenberg, the camp’s director. She was hired recently as a counselor for this summer, Greenberg wrote in a letter emailed to the camp community that she provided to JTA.

“There are no words for what we have to share with you,” Greenberg wrote. “Losing Talia will have an incredible impact on her friends, her counselors, and her campers and on the entire Tevya community.”

Talia loved to laugh and could be goofy, according to her camp friend, Zoe Saldinger, who lives in Connecticut. In a phone conversation with JTA, Zoe recalled sharing a camel ride with Talia last summer on their camp trip to Israel.

“She was laughing the whole time,” joking that the camel behind them was going to bite them.

But she was a serious and dedicated artist as well.

During their two-week counselor-in-training session, Talia spent time drawing the camp’s natural surroundings, capturing the lake through a vista between trees, Zoe recalled.

“She had a cool way of seeing the world and finding ways to put that on the page,” she said.

Zoe’s mother, Cathryn, told JTA that she has been watching the friends grow up together since they were 11-year-old camp bunk mates. A photo of the two taken one summer at Good Harbor beach in Gloucester, Massachusetts, captures their infectious smiles and joy, Cathryn Saldinger said.

“Talia was really very brilliant, energetic and fun,” she said.

Camp friends have been in touch through phone calls, text messaging and FaceTime, Zoe said, but she anticipates that being together with Talia’s family and camp friends at the funeral will provide comfort.

Grief counselors and other school staff consoled students at the high school on Sunday and Monday, when schools reopened. The entire Needham community is mourning the loss of the students, according to the district’s superintendent, Dan Gutekanst, who described the teens as “energetic, athletic, caring, and loving daughters, sisters and friends.”

Friends of the Newfield family gathered at their home throughout Sunday, according to Pam Putprush, a family friend whose daughter, Alex, was one of Talia’s closest friends.

“There were a lot of people there supporting them. It was good for them to not be alone,” Putprush told JTA.

The Congregational Church of Needham, the Putprush family church, held a community vigil. Many of the girls’ school friends attended, Putprush said.

She said her daughter, Alex and Talia were friends since their early elementary school years and shared clothes and hung out at each others’ homes. Talia had a similarly close relationship with Adrienne, Putprush said.

She said that while they were of different religious faiths, Talia and Alex shared many interests and the families are close. Growing up, Talia enjoyed many Christmas decorating parties at the Putprush home and Alex has been to many Friday night Shabbat dinners at the Newfield home, Putprush said.

In addition to her parents, Talia is survived by her siblings, Jake, Jessica and Michael. She is the granddaughter of Ethel and the late Kalman Newfield and the late Marvin and Cynthia Rosenkrantz.