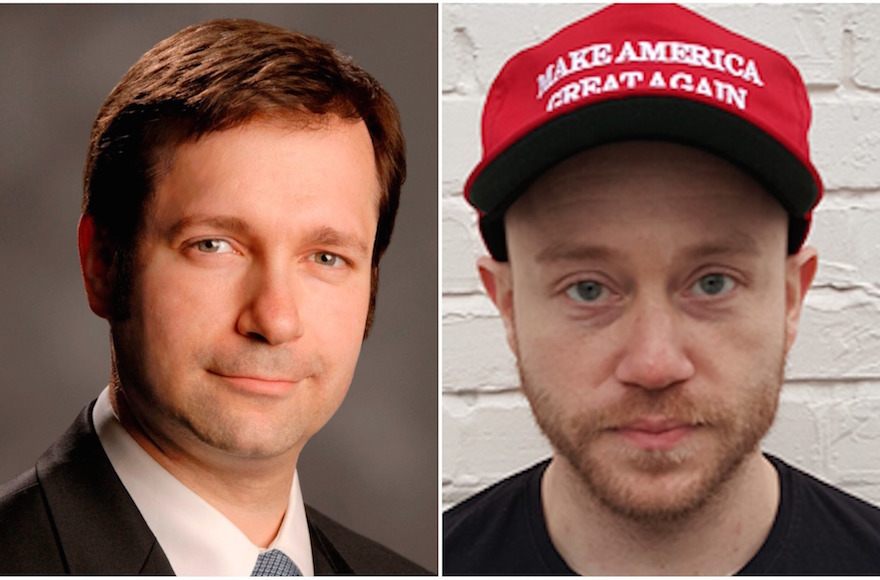 WASHINGTON (JTA) — Jay Marshall Wolman, like a thousand other lawyers on Twitter, is wry, maybe a little coarse and, well, Jewish, peppering his tweets with Hebrew blessings and other Jewish references.

He gets deadly serious, though, if you ask him why he is an attorney representing Andrew Anglin, America’s most notorious Nazi.

Wolman was in the headlines this week for his attempt to dismiss a lawsuit against Anglin alleging the Daily Stormer founder harassed a Jewish real estate agent in Montana. Tanya Gersh’s suit claims Anglin caused her “emotional distress” last year when he called for a “troll storm” against her and published her personal information.

Wolman, according to the Missoulian, a Montana daily, argued that Anglin was living abroad at the time and therefore is out of the court’s jurisdiction. (Lawyers for Gersh and the Southern Poverty Law Center, which is assisting her, have been unable to find Anglin. A U.S. magistrate in Missoula has given Anglin until Friday to prove his whereabouts.)

Wolman is not shy in his social media profile about being Jewish, so I asked him why he thought it was a good idea to represent Anglin, who heads an online clearinghouse of extreme anti-Semitic and racist thought.

Wolman, 41, declined an interview, but wrote me the following: “As a Jewish member of the team representing Andrew Anglin, I can understand why you are interested in talking with me about why I represent him and how that relates to my identity. However, I must, politely, decline the invitation. Although I do not shy away from media inquiries, I do not tend to make myself a subject of reporting.

“That said, as you will, undoubtedly, be reporting on me, I would direct your attention to our reference to the Aaron Sorkin film, “The American President.”

Wolman included a quote from that 1995 film in which the titular president says “America isn’t easy. America is advanced citizenship. You’ve gotta want it bad, ’cause it’s gonna put up a fight. It’s gonna say, ‘You want free speech? Let’s see you acknowledge a man whose words make your blood boil, who’s standing center stage and advocating at the top of his lungs that which you would spend a lifetime opposing at the top of yours.'”

“I would spend a lifetime opposing what was said, but I will never allow anti-Semitism to derail my commitment to freedom of speech. In the words of Justice Holmes, ‘hard cases make bad law.’ Any restrictions the courts might set on the speech of a person whose speech you oppose will be undoubtedly applied, at some point down the road, to the speech of a person whose speech you support. If Andrew Anglin does not have freedom of speech, then neither does the JTA.”

The popular culture reference to a 1990s film was not a surprise: Wolman’s Twitter feed reveals his affection for films of that decade and the 1980s (he’s a fan of “Say Anything,” the classic 1989 John Cusack angsty teen drama). Wolman was a contestant on “Jeopardy” in 2004 — not the best period because he was up against Ken Jennings, the quiz show’s all-time champ.

Wolman and his law partner, Marc Randazza, who is the lead counsel in the case, consistently cast their decision to defend Anglin in not-easy-but-someone’s-gotta-do-it terms.

“This is the shitty price we have to pay for freedom,” Randazza said in a recent Atlantic magazine profile of Anglin.

Anglin and Gersh’s dispute involves another white supremacist provocateur, Richard Spencer, whose mother, like Gersh, lives in Whitefish, Montana.  In December, Spencer posted an article on Medium accusing Gersh of threatening his mother, Sherry, with harassment if she did not sell the commercial building she owns in the town. Gersh, a realtor, contends that Sherry Spencer initiated contact seeking to sell her building to head off the protests and to calm the town roiled by the rising profile of her son. Richard Spencer began to garner media attention in 2016 for his support of the presidential candidacy of Donald Trump.

“Tell them what you think of his whore mother’s vicious attack on the community of Whitefish,” Anglin wrote.

Wolman and Randazza in their filing argue that the messages against Gersh were “generally recognized anti-Semitic tropes, without actual harm reasonably to be construed.”

“And, even Nazi expression, no matter the psychic harm on Jewish residents, is nonetheless protected speech,” the filing said.

Wolman, who works out of The Randazza Legal Group’s office in Hartford, Connecticut, attended Cornell University and Georgetown Law School.

On social media, he likes to take on anti-Semites, including Paul Nehlen, who is challenging House Speaker Paul Ryan in his Wisconsin district. When Nehlen compiled a list of what he said were 74 Twitter “verified” Jews dominating the media, Wolman posted: “This is why I should be @verified, so I can be Jew 75.”

Answering a Twitter meme of what one would do if one were to wake up 100 years ago, he replied, “1) Bet against the White Sox 2) Use the proceeds to send Hitler to art school.”

1) Bet against the White Sox
2) Use the proceeds to send Hitler to art school
3) Short the stock market in eleven years https://t.co/AwmAYgl4lJ

The Randazza firm also runs a free-wheeling blog, and in one posting Wolman contemplated the current ironies of Hanukkah. After recounting the victory of the Maccabees over their Seleucid tormentors, he wrote, “Fast forward 2,180 years and what do we have? An Israel that had captured the Temple Mount 50 years prior, but won’t let Jews pray there. Four Adam Sandler songs in a weak effort to draw attention from ubiquitous carols. Eight nights of presents to compete with Christmas morning, instead of a few coins (actual gelt) to reward Torah scholarship.”

Wolman peppers his tweets with Jewishisms. When another lawyer wondered whether anyone else wishes that new food would appear in one’s fridge, Wolman asked, “Do you say shehechayanu if it happens?”

Do you say shehechayanu if it happens?

Anglin isn’t the Randazza firm’s only venture into representing trolls who have grated on Jewish sensibilities. In another case, however, they are on the side of a plaintiff: Chuck Johnson, who is suing what’s left of Gawker, the bankrupt gossip site. In 2014, Gawker posted an entry depicting Johnson as a flawed journalist and soliciting information to back up embarrassing gossip from Johnson’s college days.

Johnson has himself published the personal information of his perceived enemies, a practice that often leads to harassment. He has on at least one occasion denied the Holocaust. (Johnson now says he regrets it.)

I asked Wolman to reconcile defending Anglin and going after Gawker, at least in First Amendment terms. He (and Randazza) replied in separate emails, with essentially the same argument: Defamation is not protected speech.

“The issues at stake in Mr. Anglin’s case are different from the issues in Mr. Johnson’s,” Wolman said. “That I represent Mr. Johnson in a defamation claim falls within the notion of historically unprotected speech.”