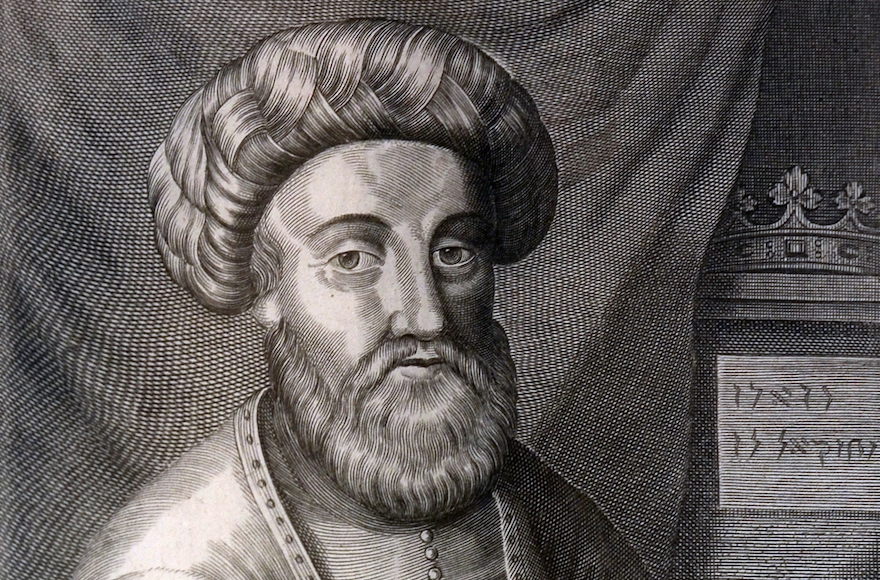 ULCINJ, Montenegro (JTA) — Throughout 1988, Jusuf Lika had debilitating migraines and sensory disruptions that doctors blamed on the chemicals in the darkroom where he had worked.

A man in his twenties in what was then still Yugoslavia, Lika consulted some of that country’s best medical experts, but none could help him, citing an irreversible buildup of toxins in his body.

“My world fell apart: As a young man I heard I would be a disabled person,” said Lika, a Muslim man of Albanian descent who runs a music school that he founded in his native city of Ulcinj, situated on the coast near the Montenegro-Albanian border.

But then a friend advised him to place in his bedroom a jar of earth from what many believe is the Ulcinj grave site of Sabbatai Zevi. A Turkey-born 17th-century Jewish eccentric, Zevi was regarded by  followers as the Messiah — that is, before his conversion under duress to Islam, when he became known among Jews as perhaps history’s second most famous false messiah.

Two weeks after taking his friend’s advice, Lika was cured of his illness, he told JTA during a recent interview in his office. “I am not a superstitious man,” Lika said. “I don’t know whether I was cured because of this, I’m just telling you what happened.” 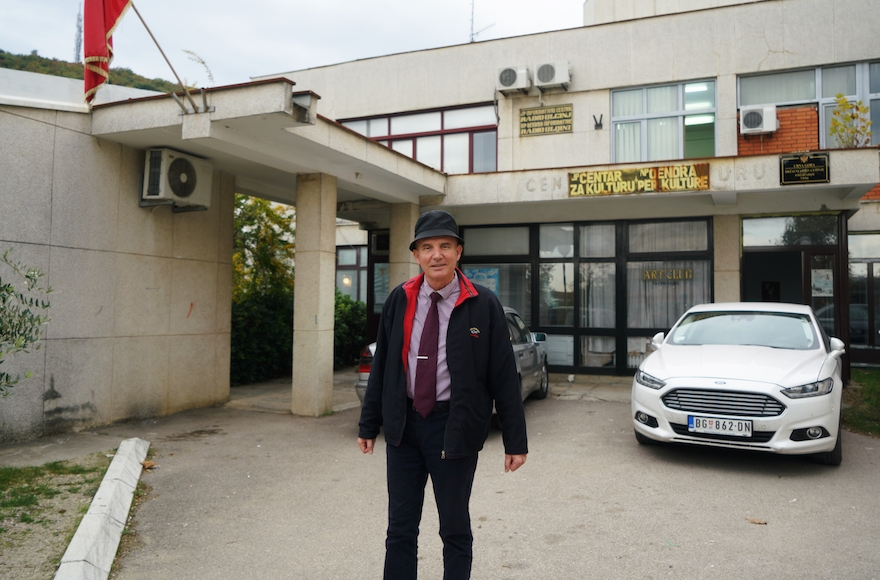 Whatever the cause for Lika’s recovery, it reflects the lasting reverence for Sabbatai Zevi by some Muslims in Montenegro and beyond. Sabbatai is one figure in a tangle of customs, secrets and traditional beliefs belonging to a regional identity that is rooted in mysticism, tolerance and religious cross fertilization.

Regarded by many Jews as a mere historical footnote, Sabbatai Zevi is nonetheless “a symbol for some Montenegrins and Albanians of their distinct identity as well as an interfaith and intercultural bridge to the West and Judaism,” according to Eliezer Papo, a scholar on Balkan Jewish history at Ben-Gurion University of the Negev in Israel.

Especially for the secretive Bektashi Shiite sect, Sabbatai Zevi is “an element through which to express their genuine philosemitism, to ‘market themselves’ to the West and to some extent to also draw tourism to Ulcinj and the region,” Papo said. “But I wouldn’t say Zevi is integral to the religious identity of the region. It’s a recent addition.”

The place that Lika believes is Sabbatai Zevi’s grave is owned by the Mani family — a clan of business owners headquartered in Ulcinj’s center. Under the shade of olive and carob trees, the sepulcher is kept closed inside a yard that few visitors dare trespass. Lika stays outside as he shows a journalist a window looking inside the small sepulcher, which has a dark and carpeted interior.

In Jewish history, Sabbatai Zevi — a savant in Jewish texts whose erratic behavior fits the symptoms of a bipolar personality disorder — was a significant figure. By the time of his conversion in 1666, he had developed a huge following across Europe. It split established communities like the one in Amsterdam, dividing rabbis and families in a heated fight for the future of Judaism. Some credit the spiritual upheaval over the “Sabbateans” with the development of the fervently mystical Hasidic movement in the 18th century. 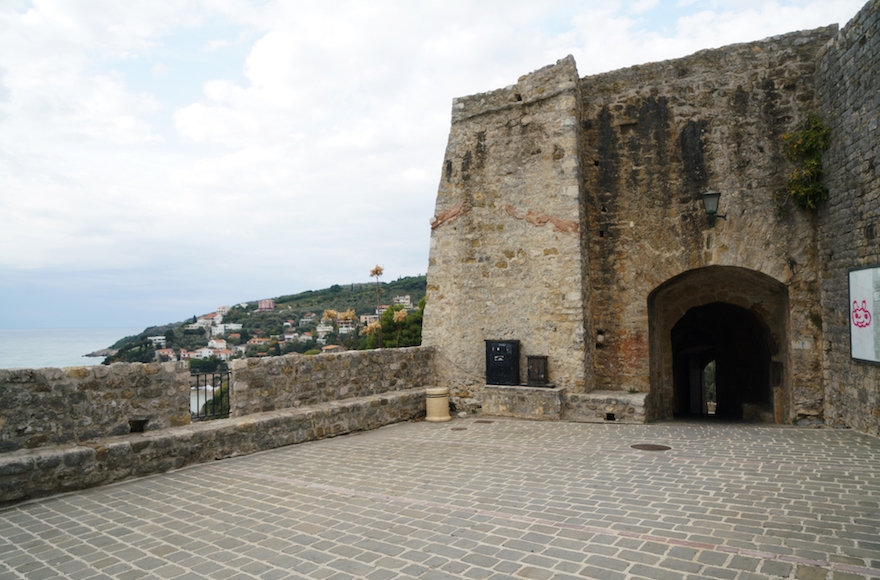 The exit of the fortress in Ulcinj, Montenegro where some scholars believe Sabbatai Zevi is buried. (Cnaan Liphshiz)

Sabbatai Zevi’s legacy has had a long-lasting effect on the region as a whole, including on the Dönmeh of Turkey — a society of crypto-Jews who for centuries presented themselves as Muslims but continued to consider themselves Jewish, with Sabbatai as their prophet. Today, only a handful of families that describe themselves as descended from Dönmeh exist in Turkey — where they are still the subject of much distrust and conspiracy theories.

Sabbatai Zevi died in 1676 in Ulcinj, where he had been exiled by the rulers of the Ottoman Empire for continuing to practice some elements of Judaism after his forced conversion. This interfaith identity in recent decades has become increasingly appealing to liberal Muslims in the region, according to Papo. In 2015, Papo chaired an international conference about Sabbatai Zevi in Ulcinj. (It was the first time in the city’s modern history that it hosted a conference on Judaism, although the nearby city of Budva annually hosts the Euro-Asian Jewish Congress’ Mahar conference of Balkan Jewish communities.)

Baba Mondi, the spiritual leader of the Bektashi sect, calls Sabbatai Zevi a “dervish” — a Farsi word for a deeply spiritual Muslim (and in some rare cases Jew) who ascetically devotes his life to serving Allah.

“He is a dervish to Jews and he is a dervish to Muslims, and a bridge for our sister religions to meet on,” added Baba Mondi, who is based in Albania. He works at the world center of his liberal sect — a magnificent domed structure in Tirana with 12 arches and jade-colored interior walls.

Elements of the Bektashi tradition and faith may have played a role in the rescue of hundreds of Jews during the Holocaust in Albania and Montenegro, a rare case of popular defiance of the Nazi occupation.

Whereas Sabbatai Zevi is a well-known and popular figure in Ulcinj, there is some dispute about where exactly he is buried in this drab and chaotic city with a beautiful beachfront and few hotels.

Many locals believe Sabbatai Zevi’s remains rest inside the sepulcher owned by the Mani family — whom some locals, including Lika, believe are themselves Jewish because of their relative wealth and their name, which is common among Turkish Jews.

Alma Mani, a woman in her 20s, was the only member of the family who agreed to talk to JTA. Rolling her eyes when asked about the sepulcher, she insisted the grave inside is not Sabbatai Zevi’s but of “some ancient ancestor.” She declined to say anything about the family’s origin or pose for a photograph.

Papo, the Ben Gurion University historian, also doubts that Sabbatai Zevi is buried inside the sepulcher.

Papo’s research has led him to an alternative location for Sabbatai Zevi’s grave, near the seaside fortress where Sabbatai lived out his final years and where he likely had his study.

The fortress’ tower has a work space that archaeologists now use to prepare exhibits from the site. Mysteriously, that space has two niches, one featuring two Stars of David and another adorned with a painting of a snake descending from a tree. 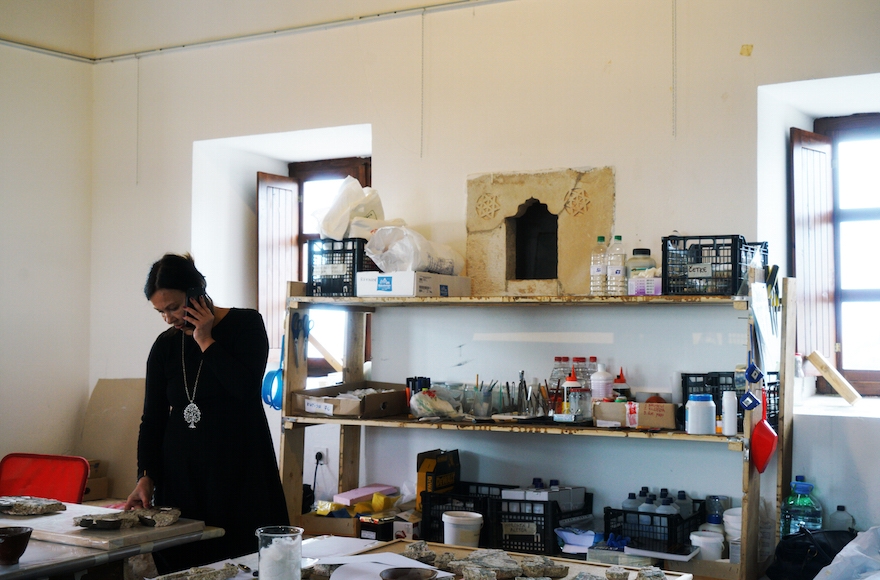 An archaeologist working in a space in Ulcinj, Montenegro that is widely believed to have been the study of Sabbatai Zevi. (Cnaan Liphshiz)

Whereas Stars of David were commonly used in Islamic decorations, the snake painting is much stronger indication of Sabbatai Zevi’s connection to the place. It corresponds with Sabbatai’s unique interpretation of the story of the Garden of Eden in the Book of Genesis, Papo said.

“The followers of Zevi who became Muslims believed the messiah is destined to help us off the tree of knowledge of good and evil and onto the tree of life,” Papo said. In Judaism and early Christianity, he added, there are strong ties between the snake and the concept of messiah. Additionally, Sabbatai Zevi’s followers called him “Ilan” – Hebrew for tree. Seen together, these elements reinforce the hypothesis that the snake painting is “a distinct Sabbatai Zevi symbol,” Papo said.

The same symbol features on headstones of Zevi followers in Istanbul.

As for Sabbatai Zevi’s burial place, Papo traces it to a hill near the fortress.

Fittingly for the resting place of a man who personifies the concept of interfaith influences, the hill is sandwiched between what used to be a mosque and a church with a Christian cemetery.

“If you ask me, that’s where this Jew is buried,” Papo said.