Israel needs Trump to contain Iran. He’s off to a good start. 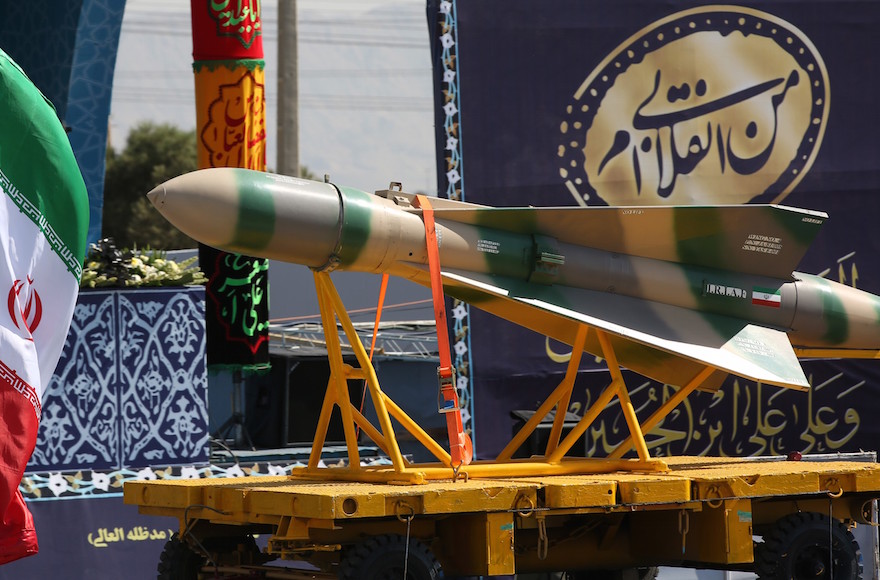 TEL AVIV (JTA) — The latest episode of Iran flexing its regional hegemonic muscles in the Middle East came with a direct and unprecedented military challenge to Israel.

Last week, Iran used a technologically advanced drone – reverse-engineered from a U.S. drone captured in 2011 – to penetrate Israel’s airspace. Israel took the drone down, and proceeded to strike Iranian and Syrian military targets deep in Syria. While Israel lost an F-16 in the exchange, the message to Iran and Syria regarding Israel’s willingness to respond quickly and decisively was clear, and the episode was over within a few hours.

Different lessons can be drawn from this military clash, but the core issue is Iran’s ongoing presence in Syria: It’s goal is to assert itself there, and to call the shots, including vis-à-vis Israel. Iran strives to establish permanent Shiite militias in Syria that will fulfill its hegemonic designs for the Middle East, similar to the role played by its proxy, Hezbollah, in Lebanon.

Israel made a conscious decision to remain on the sidelines of the civil war in Syria, intervening there and in Lebanon over the past years only in order to address direct security threats. It has carried out targeted strikes on convoys transferring advanced missiles from Iran to Hezbollah, and lately has made efforts to sabotage Iran’s plans to construct missile factories in both countries. For Israel these are unacceptable game changers in any future war that might erupt with Hezbollah.

Israel will continue to act to ensure its security interests, while coordinating with Russia. Yet, the tension in Iranian-Israeli relations will continue to percolate in Syria. Down the line, many predict that the next flare-up is virtually inevitable, possibly seeing Iran firing missiles into Israel, which could escalate to major warfare.

But while the risks of escalation are real, they cannot be assessed in isolation from the wider context in Syria. Military moves by Iran in Syria that go beyond the bounds of the civil war will draw in other actors – whether those directly involved on the ground, or on the sidelines. Russia and the U.S. in particular have a strong interest in denying Iran such freedom of action, and they are the main parties that should be working to ensure Iranian restraint, and its ultimate departure from Syria.

It is vitally important that the U.S. remain a key player in this region. While the administration has yet to carve out a comprehensive strategy regarding the Middle East, the Iran policy unveiled by Trump in mid-October clarified that all aspects of Iran’s behavior are linked, and that U.S. policy will relate to the nuclear deal alongside the other issues: Iran’s missile tests, its support for terror and its regional aggressions. Secretary of State Rex Tillerson clarified last month that the U.S. will keep troops in Syria to among other things push back against Iranian influence.

The U.S. response to the weekend clash – emphasizing Israel’s right to defend itself – was strong and was welcomed by Israel, but more will be needed from the U.S. in order to contain the situation over the long term. It will require diplomatic efforts vis-à-vis Russia and the Europeans, and there might soon be a need for targeted military action against the Islamic Revolutionary Guard Corps in Syria.

Trump is currently facing criticism that while he talks tough on Iran, he has yet to act. The first thing to note is that rhetoric is important; it’s not “just talk.” Policy statements can change things in the real world, as seen with Trump’s declaration that Jerusalem is Israel’s capital, but also with regard to his approach to Iran.

Moreover, Trump has taken action. He sanctioned Iran immediately for its missile tests last year, merely 10 days into his administration. He did not tear up the nuclear deal immediately, as he had promised on the campaign trail, but no one really expected him to do so. In addition, his administration did carve out a new approach to the Iran deal that involves both words and deeds. His current threat to leave the deal is the only thing pushing the Europeans to finally begin discussions on how to address the deal’s blatant flaws.

Since Trump was elected, significant portions of the U.S. foreign policy community refuse to take anything he says or does seriously. The cacophony of protestations makes it hard to debate policy options in an informed, nonpartisan manner, but such debate is sorely needed.

A good starting point is to recognize that while the U.S. needs to do more to contain Iran in Syria, the administration is moving in the right direction on Iran – regarding the nuclear deal, and in its response to other aspects of Iranian behavior. Opposing the repressive and aggressive Iranian regime should be about the dangerous implications of Iran’s actions, not whether one supports or opposes the president.

(Emily Landau is a senior research fellow at The Institute for National Security Studies at Tel Aviv University and head of its Arms Control and Regional Security Program.)