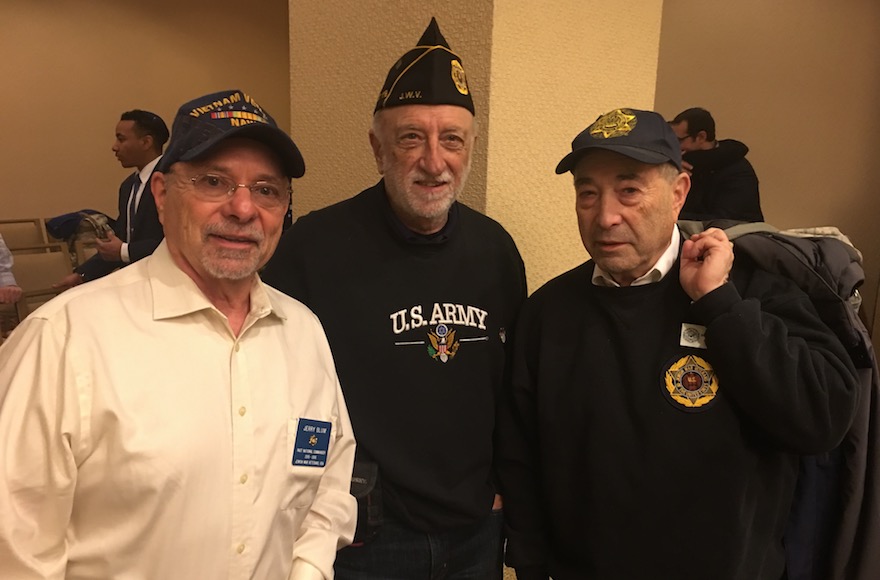 Like a lot of other Jewish dilemmas, what’s old for Jews who serve in the U.S. military is new again, and the organization established in 1896 to dismantle myths and anxieties about Jews in uniform is still confronting them.

Jewish War Veterans, a group that advocates for Jews in the military and for the military in the Jewish community, set aside a Shabbat at its annual conference this month to discuss strategies to remind Americans (and Jewish Americans particularly) that there is a proud tradition of Jewish service.

“Time and time again, we have to remind our fellow Americans, ‘Yes, we were there,'” Col. Rich Goldenberg of the New York National Guard said at a session at the Feb. 10 Shabbaton. “This goes back to the Civil War.”

One of the reasons for the conference theme was simply organizational survival: JWV officials say they have about 20,000 members, many of them veterans of long past wars, although there are likely hundreds of thousands of living Jewish veterans eligible to join its ranks.

Three obstacles to spreading the word emerged during the conference from speakers and participants, who represented the breadth of the U.S. armed forces: the persistent stereotype that Jews are underrepresented in the military; the ongoing reluctance of Jewish families to send their sons and daughters to the military; and a military culture that encourages the repression of any expression of identity unrelated to the military. 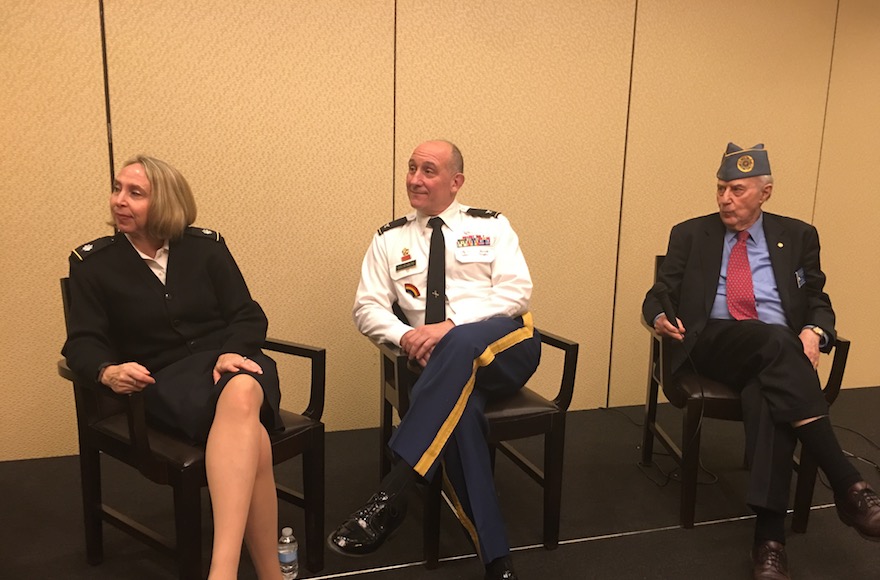 Dan Rosenfield, a recent graduate of Texas A&M University and now a second lieutenant at Ellsworth Air Force Base in South Dakota, talked about bringing around his family to the prospect of an extended stay in a corner of the country with virtually no Jews.

“My mother wasn’t happy,” he said. “It was two more years without a Jewish girl.”

Goldenberg said there is an undertone in Jewish society that Jewish service is undesirable.

“One of the most important groups we should be talking to is other Jewish Americans — they have become less and less tied to our service,” he said.

One way to overcome that reluctance is to tell stories that are heroic, both from a Jewish and a military perspective. Goldenberg recalled a meeting between two Jewish veterans who served as prison guards — one of Nazis at Nuremberg and one of accused terrorists at Guantanamo Bay. Each recalled endeavoring to treat the prisoners humanely, setting examples for other guards — and for the prisoners.

“They both tell the story that the found the right opportunity to remind the prisoners — at Nuremberg and at Guantanamo — that they were being guarded by American Jews,” he said.

Marc Wolf, a former Navy officer who is now the chairman of Warriors and Veterans society of the UJA-Federation of New York, said reaching younger veterans who may not be aware of JWV was vital.

“Talking to the younger generation is one of the most important conversations we can have,” Wolf said. “This is our Jewish fraternal organization. It’s the voice of Jewish warriors. To not figure this out would be a shanda [shame].”

Matt Bernstein, until recently an officer in the Army’s Judge Advocate Corps, said he only learned about JWV when he moved to Washington, and he passed by its small museum near Dupont Circle.

“I didn’t know about it and it was three blocks from my house,” said Bernstein, who included Bowe Bergdahl, the sergeant who was captured after walking off his base in Afghanistan, among his clients.

Rosenfield said service members who meld their service with their Jewish activism is one way of reaching other Jews. Last year at Texas A&M, he brought together the university’s Corps of Cadets and its Hillel, as well as the American Israel Public Affairs Committee, JWV and the Jewish Welfare Board, to organize a Jewish Warrior’s Weekend for Jewish ROTC members and cadets from across the United States as a means of highlighting Jewish service. At the Ellsworth base in December, he helped organize the first Hanukkah lighting on the base in 22 years.

Isolation and the pressure while on duty to subvert everything to the mission also contribute to Jews not identifying.

Shari Berger, the wife of an active duty service member based at the Norfolk, Virginia, naval base, said she immediately sought out a Jewish community when they moved to the midsize city — a strategy she said helps smooth frequent moves during a military career.

“I went spinning one day at a spin studio,” she said. “I looked around and made sure I found the one Jewish person who would make me feel at home.”

That helped ease her transition, and also helped the family sustain Jewish involvement — which in turn “makes myself feel at home when we move.”

Jewish care packages — often organized by the JWV, but also informally on Jewish military listservs — help sustain a sense of belonging, said Lt. Col.  Naomi Mercer, the Army’s chief of command policy who is developing gender integration. “When I was deployed, I got tons and tons of care packages” that she could share with other Jews.

Anti-Semitism still persists, with JWV taking up cases of discrimination. Jewish service members have at times claimed they were singled out against being promoted. There also are persistent claims of proselytization at the military academies.

An irritant is the perception that Jews underserve. At the JWV conference, the consensus was that there are 30,000 Jews currently serving — more than half a percent of the estimated 5.5 million Jews in the United States, and outpacing the 0.4 percent of the U.S. population currently in uniform. If the count is correct, and taking into account demographics — the Jewish population is older on average, so a smaller portion would be eligible to serve — Jews, as they have in the past, have a higher representation in the U.S. armed forces.

Goldenberg said the same contradiction has historically been true of Jews in Diaspora militaries, noting that around the same time Jewish War Veterans was established toward the end of the 19th century, German and British Jewish veterans groups were being established to combat the same misperception.

“We’ve always been the outsiders looking in in the lands we’ve lived in,” he said.