Mandy Patinkin: Star on the Hollywood Walk of Fame better than a bar mitzvah 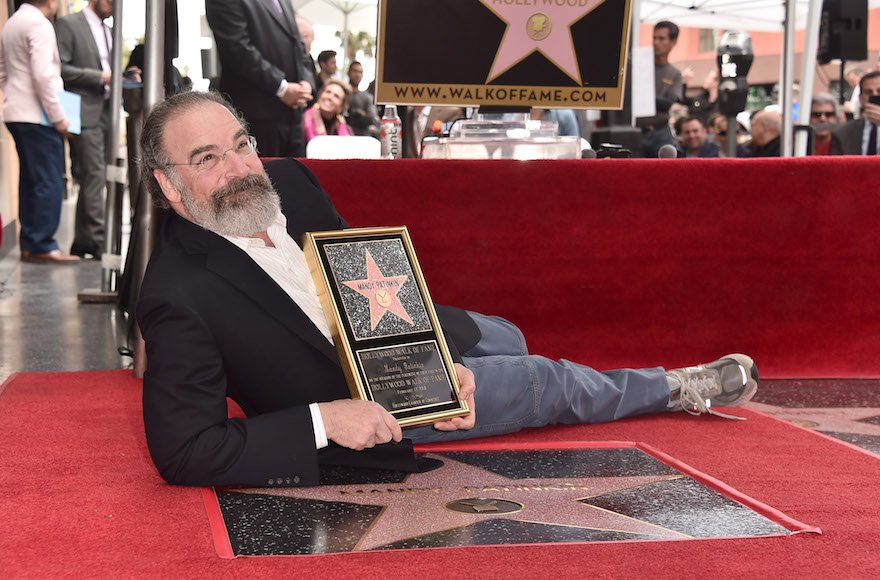 Mandy Patinkin at a ceremony honoring him with the 2,629th star on the Hollywood Walk of Fame in Hollywood, Calif., Feb. 12, 2018. (Alberto E. Rodriguez/Getty Images)
Advertisement

Getting a star on the Hollywood Walk of Fame, says “Homeland” star Mandy Patinkin.

But based on his award ceremony earlier this month, Patinkin’s star on Hollywood Boulevard should have had six points.

If he didn’t become a Broadway star he’d have been a cantor, singer and actress Patti LuPone said in introducing the latest Walk of Fame honoree. The two starred together in “Evita” on Broadway beginning in 1979.

Patinkin’s acceptance speech on Feb. 12 was sprinkled with stories of Jewish moments and Jewish people.

He thanked Bernie, his parents’ friend from their South Side Chicago synagogue, who told them that their son should earn a business degree instead of following his heart to a career in music. Bernie even sent several letters to Patinkin’s parents to make sure they got the message. But Bernie’s efforts only pushed his parents to back their son’s dreams even more.

Patinkin thanked “Mrs. Goldberg” — Ann Goldberg, the wife of the cantor at that synagogue, Congregation Rodfei Zedek — for encouraging him in the boys’ choir there, as well as the director of the Young Men’s Jewish Council Youth Center for inspiring his love of the theater. Patinkin called the ethos of the world of theater “my Torah.”

The actor recalled his Jewish wedding, saying his ketubah, or wedding contract, was signed by the late theatrical producer Joseph Papp, who he said appears in the wedding photos sweaty from the dancing.

Patinkin also thanked the writers and cast of “Homeland,” now in its eighth season. The hit Showtime series is based on an Israeli show.

“I don’t know who I would be without the gift of Saul Berenson,” Patinkin said of his very Jewish character, who defects to Israel in the fifth season after a fake kidnapping involving the Mossad intelligence agency. The character also attends a Seder at the home of the Israeli ambassador and, in the first season, says Kaddish over the body of an al-Qaida operative who dies in his custody.

Patinkin filmed some of the episodes for the show on location in Israel, where several family members live.

It is a far cry from his iconic role of the Spanish fencer bent on exacting revenge for the murder of his father, Inigo Montoya, in the 1987 movie “Princess Bride.” He also played yeshiva student Avigdor, the love interest of Barbra Streisand in the 1983 movie “Yentl.” Patinkin won an Emmy in 1995 for the hospital drama “Chicago Hope.”