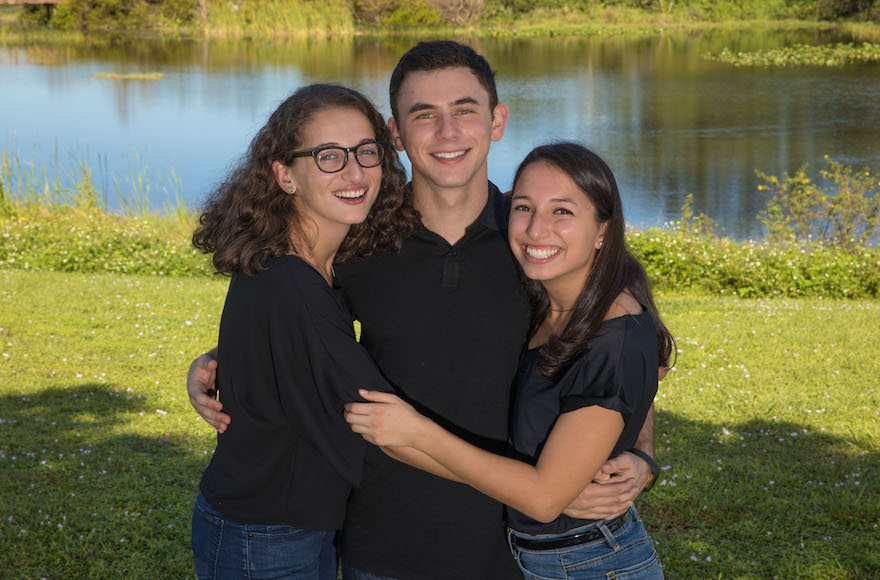 From left to right, Gabby, Cole and Serena Deutch are organizing an initiative to raise money to end gun violence by baking hamentaschen. (Courtesy of Gabby Deutch)
Advertisement

(JTA) — The college-aged kids of a Jewish congressman from Florida are raising money to end gun violence by selling hamantaschen.

Gabby, Serena and Cole Deutch launched the Bake Action Against Gun Violence initiative on Sunday. Their father is Rep. Ted Deutch, a Florida Democrat who represents the district where 17 people were killed last week in Parkland in a shooting rampage at Marjory Stoneman Douglas High School by a former student there.

The project encourages Americans from across the country to bake hamantaschen, a pastry traditionally eaten during the upcoming holiday of Purim, and sell them to raise money.

After learning about the shooting, Gabby Deutch, 22, wanted to find a way to help. As a senior at Yale University, she felt far removed from her hometown of Boca Raton, which is near Parkland. From her work as a camp counselor at Camp Ramah Darom, a Jewish summer camp in Clayton, Georgia, she knew several kids who were inside the school at the time of the shooting.

“I was watching the news, and it felt like people just weren’t paying any attention,” she told JTA on Thursday. “I felt very distant from a lot of the community here. Although my friends were very supportive, it felt like people sort of are used to this kind of thing, so they kind of tuned it out.”

Deutch spoke to Serena, a senior at Vanderbilt University, and the sisters decided they wanted to find a way to make a difference using Jewish food. The sisters are both active in Challah for Hunger, an initiative in which college students bake and sell the bread to raise money for hunger relief.

“We were thinking about the idea of Jewish food, and we’ve both seen that people are really excited and willing to pay for that if it goes to causes they  care about,” Deutch said.

Since Purim starts Feb. 28, they decided to go with hamantaschen. The pair enlisted Cole, a freshman at the University of Texas at Austin, and started recruiting friends throughout the country to join. Groups who sign up decide how to do the baking, how much to charge and where to give the money. The website recommends donating to groups such as Everytown for Gun Safety and the March for Our Lives, as well as fundraisers for the families of the Parkland victims.

Over 40 Jewish groups, including Hillels at universities nationwide, have signed on for the hamantaschen baking.

Gabby Deutch said she and her siblings drew inspiration from the Purim story, which commemorates the downfall of Haman, a despotic henchman to a Persian king, through the heroic intervention of the Jewish Queen Esther and her cousin Mordechai.

“I think it’s a holiday that within the Jewish world, at least within more liberal Jewish circles, people take a lot of messages of social justice from, so I think with that in mind it made sense to use it,” she said.

Deutch said her father is participating in the initiative and “has been very supportive,” although she joked that he likely won’t be the one baking.

“He’s very excited about it. I will say that he’s not the baker in our family, so I’m not sure that he will be participating in baking, but my mom is [participating] this weekend with some of her friends,” she said.

Since the shooting, Ted Deutch has spoken vocally in favor of gun control. On Wednesday, the congressman participated in a CNN town hall event with shooting survivors where he slammed those who said it was “too soon” after the tragedy to discuss gun control. In an exchange with Sen. Marco Rubio, R-Fla., Deutch defended his call to introduce legislation to ban assault weapons.

“You would literally have to ban every semi-automatic rifle that’s sold in the U.S.,” Rubio said.

Deutch responded: “Do I support banning weapons that fire off 150 rounds in seven or eight minutes, weapons that are weapons of war, that serve no purpose other than killing the maximum number of people they can? You bet I am.”

Gabby Deutch said she is happy to make a difference, and that other participants have told her they feel the same.

“I was feeling disappointed by a lack of response, at least on Yale’s campus,” she said, “and a lot of people since this has become public have come up to me and really expressed gratitude that something is happening about it, which makes me feel like there are people who care about this issue.”