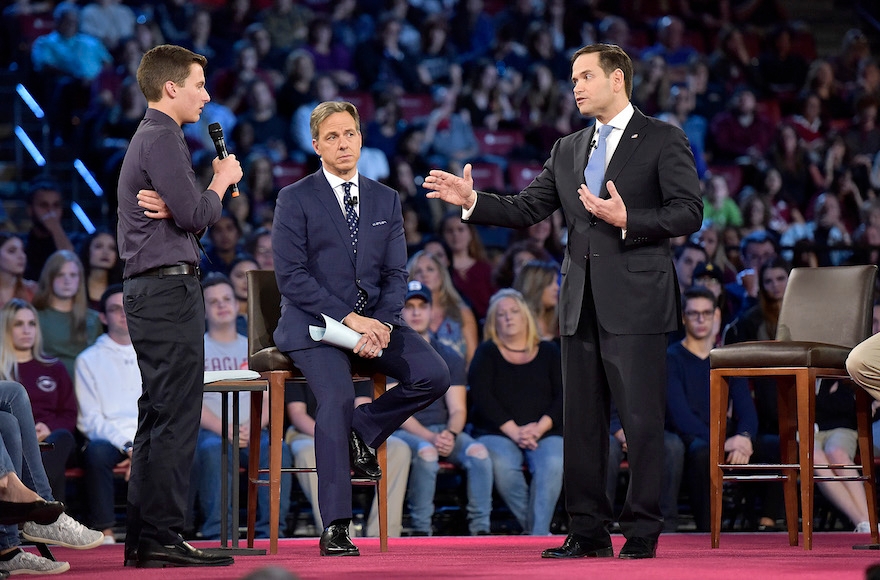 (JTA) — The grieving parents of Jewish children killed in the shooting rampage at Marjory Stoneman Douglas High School in Parkland, Florida, were among those who lashed out at lawmakers and firearm advocates during a town hall hosted by CNN.

Student survivors of the attack, as well as their teachers and parents, faced off with Florida’s two U.S. senators, Marco Rubio and Bill Nelson; the district’s congressman, Rep. Ted Deutch; and NRA spokeswoman Dana Loesch on Wednesday evening, a week after an expelled Stoneman Douglas student shot his way through the school’s halls using a legally purchased AR-15 assault rifle.

Fred Guttenberg, whose 14-year-old daughter, Jamie, was killed in the attack, told Rubio that his comments over the last week about the shooting and the need for gun control are “pathetically weak.”

Fred Guttenberg, whose daughter was killed in Parkland shooting, to Sen. Marco Rubio: “Look at me and tell me guns were the factor in the hunting of our kids … and you will work with us to do something about guns” https://t.co/puYEwoVG1N #StudentsStandUp https://t.co/AC5Zh2567K

“My daughter was hunted last week … She was massacred. My daughter, who was the energy in the room. She brought beauty and joy to everyone she was around,” Guttenberg said. “I am enraged. I want to hear our elected officials, I want them to look me in the eye and acknowledge the role that guns played in the hunting of my daughter.

“I am tired of people doing nothing,” she said. “This horrific incident has to be the catalyst that finally puts things in action.

Later she asked, “Where are our metal detectors? Where is our bulletproof glass? … Where is the funding to protect the ones who will be the future of our nation?”

Lori Alhadeff, whose 14-year-old daughter died in the shooting, delivers a powerful speech at #StudentsStandUp directed at the NRA: “Enough talk. What is your action?” https://t.co/EniNh54u6q

Stoneman Douglas junior Cameron Kasky confronted Rubio, calling on him to turn down campaign contributions from the National Rifle Association.

“Can you tell me you won’t be accepting a single penny from the NRA?” Kasky asked Rubio.

“In the name of the 17 people who died, you can’t ask the NRA to keep their money?” the teen asked.

Cameron Kasky, who survived the school shooting: “Sen. Rubio, can you tell me right now that you will not accept a single donation from the NRA?”
Rubio: “People buy into my agenda, and I do support the Second Amendment” #StudentsStandUp https://t.co/ucmVB74g1C

Linda Shulman, the mother of Scott Beigel, the teacher who was killed while ushering students to safety in a classroom, confronted the NRA’s Loesch, demanding to know: “Why are my son’s unalienable rights not protected as fiercely as the right to bear arms?”

Loesch responded, “I’m sorry for what you experienced. And I’m not — as I said, I’m a parent, but I have not been in this position. And as a parent, it terrifies me, to be honest with you–”

“It should,” Schulman interjected.

Loesch continued that the issue isn’t a trade-off between caring about others’ lives or caring about firearms.

“This issue is about making sure that we’re protecting innocent lives. No innocent lives should be lost. None of them should,” she said.

The mother of Scott Beigel, a teacher who was killed in the shooting, to NRA spokeswoman Dana Loesch: "Why are my son's unalienable rights not protected as fiercely as the right to bear arms?" #StudentsStandUp https://t.co/QxIISwI65M

Max Schachter, whose 14-year-old son, Alex, was slain, read a poem about roller coasters written by his son.

“He wasn’t writing about his life and had no idea his poem would become the future,” he said.

Max Schachter, the father of Alex Schachter who was killed in the shooting, shares a poem that his son wrote at #StudentsStandUp https://t.co/032AaYLVhU

At the end of the evening, the high school’s drama club performed an original song titled “Shine” that appeared to be directed at the shooter: “You may have hurt us, but I promise we are not going to let you in. We’re putting up a fight. You may have brought the dark, but together we will shine a light, and we will be something special. We’re going to shine, shine.”