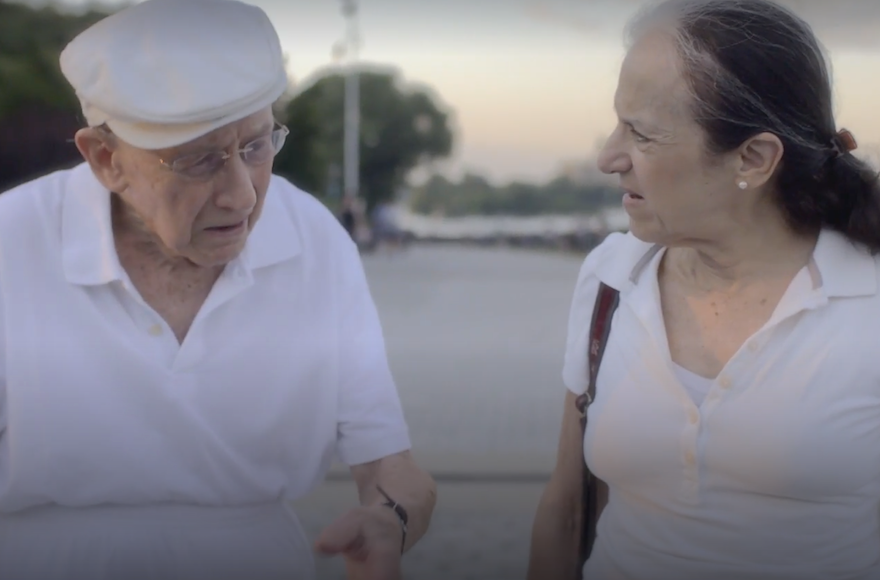 (JTA) — Harry Miller and Shula Chernick are two real people, but they could have just as easily been characters in one of Woody Allen’s early rom-coms.

“I used to love walking, and I can’t stand walking anymore,” Miller told The New York Times after spending his morning walking around the Met.

“Wait a second, you walked all the way down to meet me,” Shula Chernick said.

“Yeah, but I wasn’t carrying my shoulder bag.”

“Well, who tells you to carry the shoulder bag?” Chernick said. “I always tell you not to.”

It’s convenient then that they both act in a remake of “Annie Hall,” Allen’s most famous film. The 40-minute movie, called “My Annie Hall,” isn’t available to watch anywhere, but it is described in two longform write-ups in The Daily Beast and now The Times.

Miller and Chernick fit the movie’s bill perfectly: They live on the Upper East Side. They like to eat at diners, watch movies and go to the Met. At least one of them (Chernick) is Jewish.

The one catch: They’re senior citizens, a couple generations older than the characters Alvy Singer and Annie Hall were in the original 1977 film. Miller is 94 and Chernick is 73. They’ve been going out together, as friends, for nine years, and both attend programs at the Lenox Hill Neighborhood House senior center.

They came to star in the movie after attending a class at the center taught by two young filmmakers, Ellie Sachs, 25, and Matt Starr, 29. Starr realized how empowering film could be for seniors when his grandmother, who has Alzheimer’s, became much more animated and talkative after watching “Casablanca.”

Starr and Sachs, who are a couple and are both Jewish, taught their seminar on movies ranging from “Singing in the Rain” to “Rosemary’s Baby” for 10 weeks at Lenox Hill, then decided to re-shoot one of the movies with the attendees. After voting, they settled on “Annie Hall.”

“We encouraged the class to do ‘Annie Hall’ just because Lenox Hill Neighborhood House is so close by to a lot of the original locations,” Sachs told The Times. “And it’s a memory movie. It’s about looking back and thinking about what you choose to remember, why you choose to remember certain things, what are the most salient and important memories. And also it’s a love story. It’s accessible and seemed very ageless.”

The couple was going to shoot the movie on their iPhones with leftover money from their bar and bat mitzvahs, they told The Times, but the project grew into something much larger. They ended up raising $11,000 — from benefactors including Jeff Garlin of “Curb Your Enthusiasm” — and hiring a crew. The movie covers most of the original film, minus the part set in California. Half of the scenes were shot at their original locations.

But for the millennial directors, reaching their co-stars was sometimes a challenge.

“Harry has a cellphone, but it’s only on 30 minutes a day,” Starr told The Times. “And Shula has one that she hasn’t turned on in five years. Getting in touch with them, it’s difficult.”

Allen wasn’t involved in the remake, and Starr and Sachs told The Times that they weren’t worried about any link with the sexual abuse he allegedly committed, which recently has come under new scrutiny. The team behind the remake didn’t feel beholden to Allen’s original work, either. Miller, for example, refuses to see the original “Annie Hall,” thinking it might influence how he acts in Starr and Sachs’ version.

For Miller, the movie is something of a return to his past career as a scene designer for TV and stage, for which he won two Emmys. Chernick had a more eclectic life, serving in the Israeli army, living in Africa and running a senior center in Harlem.

The movie premiered in December. Since then, the young directors have stayed in close touch with Miller and Chernick, neither of whom have children. Through the filming and afterward, the quartet has developed a grandparent-grandchild connection.

“You two are part of my life,” Miller said to Starr and Sachs, according to The Times. “You’re the only people who ever call me. I don’t get calls from anyone else because they’re all dead. Now I have two grandchildren.”