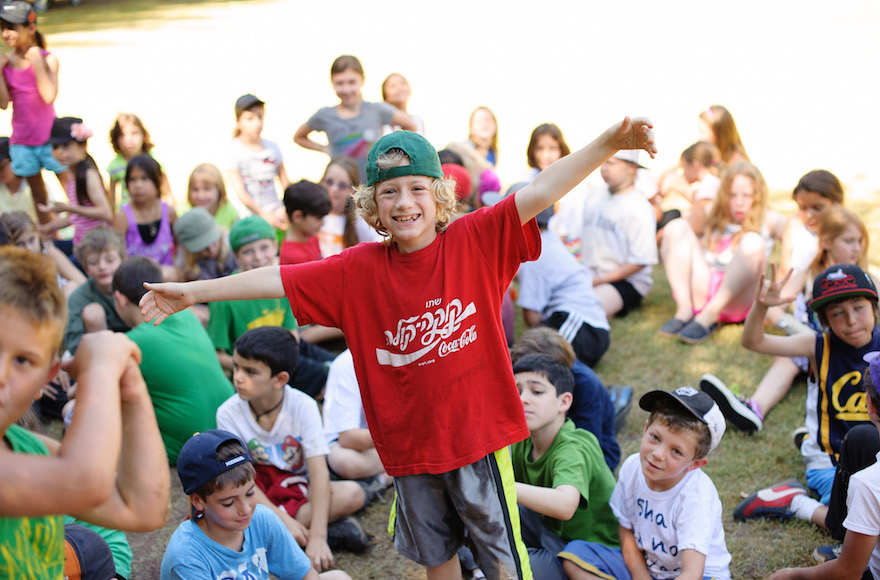 The organizers of Kayitz Kef, a Hebrew language immersion program running at 10 Jewish day camps across America, want to expand it to 48 camps over the next decade. (Courtesy of the Foundation for Jewish Camp)
Advertisement

This story is sponsored by the Steinhardt Foundation for Jewish Life.

On a warm summer day at a Jewish day camp east of Cleveland, an Israeli counselor instructs his charges in Hebrew to get their water bottles.

The kids, none of them fluent Hebrew speakers, strain to comprehend. One of them, misunderstanding the instruction entirely, returns with a container of sunscreen.

Using exaggerated pantomimes, the counselor makes a face as he pretends to slake his thirst with the lotion. It’s a bizarre performance, but it does the trick. Without a word of English spoken, the child turns around to fetch his water bottle.

So it goes at Kayitz Kef, a program in Hebrew language immersion running at 10 Jewish day camps across America that its backers hope will grow to 48 camps in the next decade. For six hours a day, a staff of mostly Israeli counselors speaks only Hebrew to the campers as they participate in the routine activities of summer camp. English isn’t used unless there’s a safety concern.

“Camp is a place so rich in language opportunity,” said Rabbi Ami Hersh, director of Ramah Day Camp in Nyack, New York, the first summer camp to pilot the program in 2013 with 17 kids participating. This year, the camp is expecting nearly 100.

“Kids at camp learn language in a very natural way,” he said. “This is not sitting in a classroom learning. This is learning language naturally as if you were a baby learning a language for the very first time.”

As with parents teaching children to speak, Kayitz Kef relies on repetition, hand gestures, playacting and other visual cues to build Hebrew vocabulary among campers who sometimes have zero background in the language. The one thing counselors never do is translate a word into English.

If a camper needs to go to the bathroom, she will be prompted to ask if she can visit the “sherutim.” When campers are heading to the pool, counselors will tell them they are going to the “breichah.” If ice cream is on the lunch menu, campers need to ask for “glidah” if they want to be served.

Campers learn not just the Hebrew words but also to incorporate them into full phrases and sentences.

“The kids want ice cream,” Hersh said, “so they’re able to respond pretty quickly to that.”

The approach can be challenging, particularly at the beginning. The program currently caters to campers entering kindergarten through the fifth grade, and the immersion in Hebrew begins on day one, from the moment they arrive. Camp directors often caution parents to be prepared if their child doesn’t love the program at first and encourage them to stick it out. Data from a study commissioned by the program’s backers show that kids and parents quickly experience the program as fun and engaging, resulting in high retention rates at each camp.

“In all the three years we’ve done this, we’ve only had one kid really leave the program,” said Meryl Rindsberg, director of day camps at the Marcus JCC in Atlanta, whose Hebrew program has roughly tripled in participation in three years.

“We’re very upfront with parents,” Rindsberg said. “We tell them: The first day is sometimes very difficult for the kids. Don’t be surprised if your kid comes home in tears.”

The Kayitz Kef approach is rooted in a language acquisition methodology known as the proficiency approach, which was developed in the 1950s by the U.S. government for its own purposes, then expanded to academic settings in the 1980s. It was adapted for Hebrew language instruction in the early ’90s by a team at Brandeis University and implemented under the leadership of Vardit Ringvald, then director of the Hebrew language program at the Boston-area school.

In an academic environment, the approach needs to be simulated, with instructors prompting learners to respond to imagined real-life scenarios and then hoping they can bring that knowledge with them into the real world. In summer camp, those scenarios emerge all the time, affording learners opportunities to hone their skills in real life.

“Camp is really the ideal setting for this,” Ringvald said. “People need stuff, they need to eat, they need to go from one place to another, they need to react and connect. It’s actually the essence of what proficiency is all about. In a classroom, you need to artificially create this setting. In camp it’s natural.”

Ringvald initially helped implement the proficiency approach at Hebrew Public, a nationwide network of Hebrew language charter schools, before adapting the method for summer camps with the creation of Kayitz Kef in 2013. The camp staff receives training before and during the summer in using the proficiency approach. Last summer, over 300 campers were enrolled in 10 camps, and three more camps will be added this summer. Sponsors hope to expand the program to overnight camps, too.

Kayitz Kef is a project of The Areivim Philanthropic Group, a consortium of seven Jewish philanthropies, in partnership with the Foundation for Jewish Camp. To its backers, the program offers a potent means of Jewish engagement to a North American Jewish community that is predominantly secular.

Bill Magaliff, Areivim’s national director of the Kayitz Kef program, says, “The appeal extends well beyond Areivim, as local funders partner with us to make Kayitz Kef possible at camps in their communities.”

The camp directors who have adopted the program say the benefits are obvious. In Atlanta, the program has created a mini-community of Hebrew speakers within the larger camp community, according to Rindsberg. At Nyack, Kayitz Kef has piqued interest among U.S.-born staff in enhancing their Hebrew proficiency.

“We have American staff members whose Hebrew is good but not great who have worked hard in a number of cases to increase their Hebrew level enough so they can work in this program,” Hersh said. “It’s had a beautiful ripple effect to carry over into camp in general.”

At some camps, Kayitz Kef has impacted the regular camp experience, too. Abbey Phillips, who directs the Anisfield Day Camp outside Cleveland where the counselor pretended to drink the sunscreen, said she initially was skeptical of the entire idea.

But after three seasons, she has become a believer. Eschewing English has forced her Kayitz Kef counselors to up their game.

“The staff are so high energy,” Phillips said. “They are one of our most spirited groups at camp because they are always singing and dancing and acting out the language.”