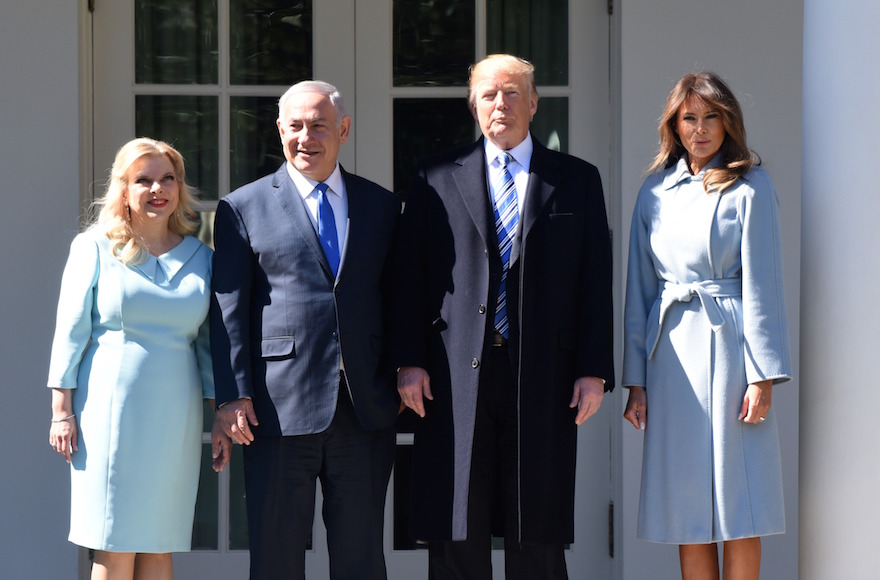 WASHINGTON (JTA) — President Donald Trump said he may be present in Jerusalem when the U.S. Embassy opens in May.

“We’re looking at coming,” Trump said Monday in opening his meeting with Israeli Prime Minister Benjamin Netanyahu in Washington, D.C. “If I can, I will.”

Trump said last month that the embassy move from Tel Aviv would take place in May, timed with Israel’s 70th anniversary, following his recognition in December that Jerusalem is the capital. He is also planning to build a new embassy in Jerusalem, which could take up to nine years. In the meantime, the embassy will be housed in a consular building.

“This will be remembered by our people through the ages,” Netanyahu said. “Others talked about it. You did it.”

The two leaders met in the Oval Office in a closed-door session said to have been scheduled to coincide with Netanyahu’s visit here this week for the annual policy conference of the American Israel Public Affairs Committee. A photograph of the visit showed Trump and Netanyahu flanked by their wives, Melania Trump and Sara Netanyahu.

Netanyahu was effusive in his opening remarks.

Netanyahu and Trump were to discuss a range of issues, White House spokesman Josh Raffel said.

“The President and the Prime Minister share a great relationship and make an effort to meet whenever the opportunity arises,” Raffel said in an email ahead of the meeting. “The Prime Minister will be in Washington for AIPAC and the two leaders look forward to discussing a variety of issues, including the Iran nuclear deal, the Syrian Civil War, efforts to thwart Iran’s attempt to establish a permanent presence in Syria from which to threaten Israel, and the Administration’s ongoing peace efforts.”