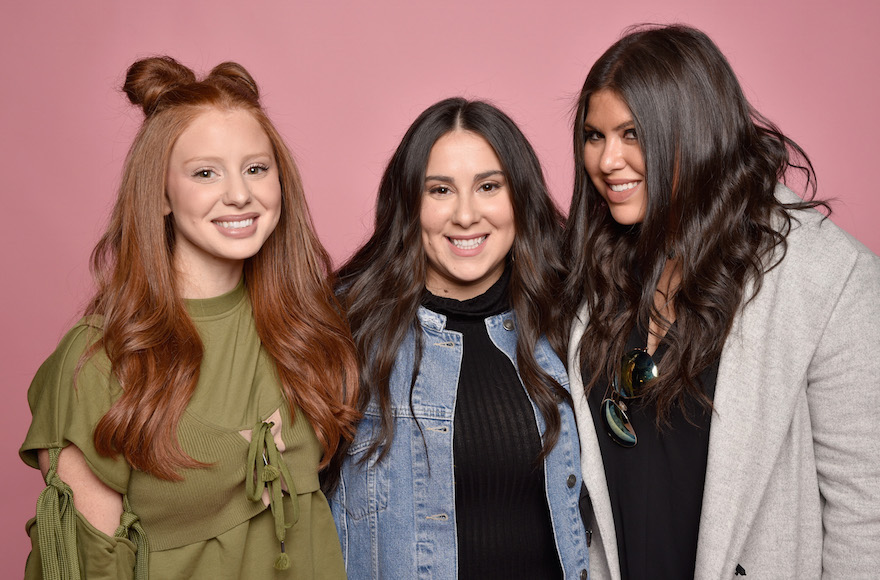 From left to right: Jackie Oshry, Claudia Oshry and Olivia Oshry at the Beautycon Festival in New York, May 20, 2017. (Kris Connor/Getty Images for Beautycon)
Advertisement

(JTA) — The four Jewish Oshry sisters, who have all gained internet fame through their various curated social media accounts, are facing a public reckoning for a surprising reason: the identity of their mother.

The most famous of the four is Claudia Oshry Soffer, who runs the Girl With No Job Instagram account. Claudia, who fills the account with funny memes and ramblings about dieting, relationships, gossip and cosmetics, has built a following of almost 3 million Instagram users.

Claudia and older sister Jackie star in a popular YouTube and Facebook Live show called “The Morning Breath,” which has been shared by the likes of Kim Kardashian and is overseen by their other sister Olivia, who has a substantial Instagram following of her own. Margo Oshry runs a food-focused Instagram account with over 100,000 followers.

Yet all of that could come crashing down after a Feb. 28 article in The Daily Beast revealed their mother was none other than Pamela Geller, an activist and blogger known for her virulent anti-Muslim opinions and writings. Geller, a diehard Trump supporter, is perhaps best known for her fierce public opposition to the construction of a mosque near the site of the 9/11 memorial, and her sponsorship in 2015 of a “Draw Muhammad” cartoon contest” in Garland, Texas, after which two suspects opened fire on a security guard before being shot and killed by police. She was banned from entering England in 2013 after the country said her presence would not be “conducive to the public good.”

The Anti-Defamation League charges that her “anti-immigrant and anti-refugee rhetoric not only contradicts the Jewish-American values which she claims to defend but it also violates basic human decency.”

The sisters never acknowledged their mother by name in any of their social media postings, and she did not appear in any of the public photos from Claudia’s wedding, or in the “Say Yes to the Dress” episode Claudia was featured in.

But the Daily Beast article also unearthed seemingly anti-Muslim tweets from the sisters, most of which date back at least three years. In one, Claudia calls former President Barack Obama a Muslim.

The sisters have since publicly apologized and disassociated themselves from their mother. In a statement to The Daily Beast, Claudia wrote that their “views are separate from our mother’s” and that the four sisters are not “anti-Muslim or anti-anyone.”

“Being raised by a single parent, we were taught to make our own choices based on our personal beliefs,” she wrote. “We do not condone discrimination or racist beliefs of any kind.”

She also posted the following teary apology to Instagram:

An apology to all of you.

The sisters have their defenders. “These girls are within their rights to not publicize the fact that their mom built a career on ranting against Islam,” wrote Angela Morabito in the Washington Examiner, noting that their own anti-Muslim tweets were years old. “No one owes the world an explanation of their embarrassing relatives.”

However, the damage has already been done. Claudia and Jackie’s show was cancelled by Verizon’s subsidiary company Oath after the publication of the article. Claudia also cancelled a comedy show at the Caroline’s comedy club in New York.

Some things you just can’t hide from the internet for long.