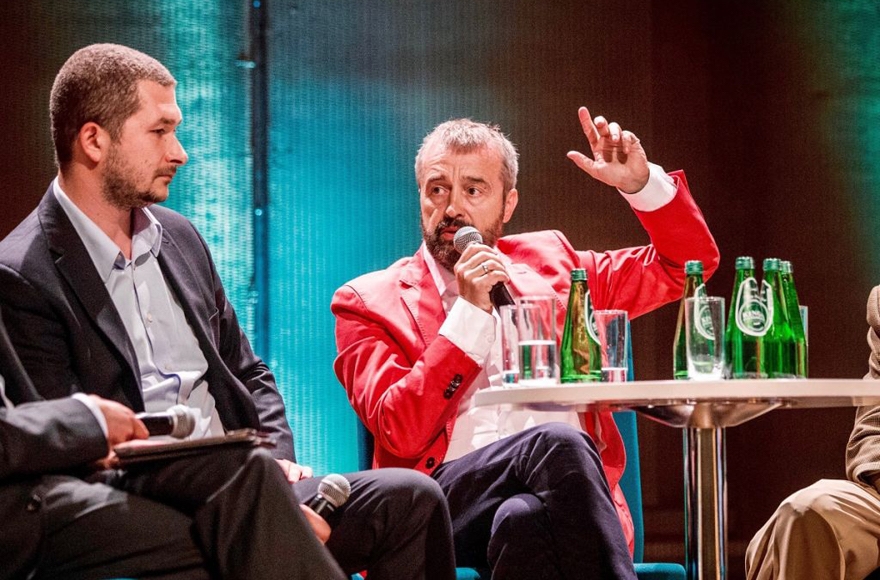 Bogdan Bialek, right, and Michal Jaskulski during a discussion in 2016 in Warsaw about the film made about his interfaith efforts in Poland. (Courtesy of the makers of Bogdan's Journey)
Advertisement

(JTA) — The Catholic journalist Bogdan Bialek is used to being called a traitor in Poland for his commemorations of Jewish victims of a 1946 pogrom in his city of Kielce.

For over a decade he has promoted awareness of and atonement for the murders, violating taboos that regard the subject as an “open wound” in Polish history. Bialek has braved hate speech to achieve unprecedented developments, including commemorative marches in Kielce and the erection of a memorial monument.

But last month Bialek, 63, for the first time was physically attacked on the street. Watchdog groups say the assault is part of the emboldening of the far right following legislation that makes it a crime to blame Poland for the Holocaust.

Shortly before the assault on Bialek — an identified man hurled insults at him and tried to hit him before passers-by intervened — someone sprayed a far-right symbol on the fence of his home.

The attack on Bialek appears to be part of a wave of hate expressions in Poland following the passing last month of the measure championed by the ruling Law and Justice party that criminalizes accusing Poland of Nazi crimes.

Widely criticized in Israel and the United States as unnecessary and counterproductive to historical research on the Holocaust in Poland, the law has snowballed into the worst diplomatic crisis in Polish-Israli relations and promoted fiery allegations. Yair Lapid, the Israeli opposition lawmaker, said it whitewashes “Polish complicity” in the genocide.

The Ruderman Family Foundation, an American Jewish  philanthropic groups, meanwhile launched a campaign titled “Polish Holocaust” urging the United States to suspend its ties with the European nation over the law. This week the Onet news site, citing unnamed documents, reported that Poland’s leaders are not welcome at the White House because of the law.

The backlash has infuriated the Polish nationalists who consider the law an antidote to wrongful accusations against Poland for Nazi crimes, according to Rafal Pankowski, co-founder of the Polish anti-racism group Never Again. Pankowski said this fury is being stoked by the Polish government, emboldening extremists to act out.

“In the space of one month, I have seen more anti-Semitic hate speech than in the previous 10 years combined,” he told JTA. In addition to the assault on Bialek, unidentified individuals last month wrote “Jews out” on a plaque commemorating a synagogue the Nazis burned in western Poland.

Whereas physical attacks remain rare in Poland, the crisis around the new law has resulted not only in a proliferation of anti-Semitic hate speech there but also its mainstreaming, according to Pankowski.

Beata Mazurek, the spokeswoman for Law and Justice and a deputy parliament speaker, on Twitter quoted a Catholic priest who said that the Israeli ambassador’s criticism of the bill “made it hard for me to look at Jews with sympathy and kindness.”

TVP, a public television station, aired an interview with a priest who said that the Jews’ perception of the truth is whatever is “beneficial” to them or Israel. And the Do Reczy conservative weekly published a drawing showing two silhouettes, one bearing a swastika and the other a Star of David, pointing a gun at a third figure emblazoned with the Polish flag.

Even Prime Minister Mateusz Morawiecki said something that his critics called a form of Holocaust denial when he remarked during an interview that the genocide’s perpetrators included Poles, Ukrainians, Germans — and Jews.

Physical attacks, however, “are not the rule in Poland today,” Bialek said. “But they are not uncommon.”

Bialek will be traveling to Israel next month for the local premiere of a 2016 documentary film celebrating his achievements.

The award-winning “Bogdan’s Journey” features a detailed account of the Kielce pogrom that happened shortly after the Holocaust to returning survivors, and which historians believe convinced many surviving Jews to leave Poland. It also follows Bialek’s uphill battle to obtain funding from state organs for commemoration efforts amid opposition by nationalists who promoted a narrative in which communist authorities, including Jews, orchestrated the murders and pinned it on ordinary locals. The film will be available this year in the United States through the distributor Log TV.

Even Bialek, an eternal optimist who in 2016 said that commemorating the Kielce murders is helping build a “better future,” said he is feeling pessimistic in the wake of the crisis over the Holocaust law.

“Essentially the government didn’t react on increasingly alarming events, aggression against people of different color, language, attire or ancestry,” Bialek said, which “will lead to inflammation for sure. This is the snowball effect. So I suspect that if the government doesn’t change its politics radically and deeply with regard to immigrants and others, the situation will be worse and worse.”

In a country where only a few thousands Jews live today, “Muslims and foreigners had replaced Jews for many years as the main target for xenophobic hate,” Pankowski said. But the fallout over the new law “has put Jews back at the center of its” focus, he added.

Polish officials have vowed to fight anti-Semitism and extremism. Yet many Polish Jews share Bialek’s pessimism. Last month, 23 Polish Jewish groups sounded the alarm over the proliferation of hate crimes in their country, which they said is making them feel less safe than ever before in Poland.

Their joint statement was in stark contrast to the community’s official line for decades highlighting the revival of Jewish communities in a country where the Nazis killed 3.3 million Jews.

Despite the setbacks, some observers of the meltdown in Polish-Jewish relations say the row is helping expose new audiences to historical truths.

Historian Rafal Stangreciak in an interview on the TVN24 station last month said there were more Poles who betrayed Jews than there were Poles who saved them.

“This is a new finding, and it’s getting attention because of this crisis,” said Michal Jaskulski, who co-directed “Bogdan’s Journey” with Lawrence Loewinger.

Bialek, who has worked since the early 2000s to foster greater understanding between Poles and Jews, acknowledges that his cause has taken a major setback following the toxic debate that has emerged around the new law.

But considering the many ups and downs in that strained and highly emotional relationship, he said, it may form the foundation for a stronger partnership once the crisis subsides.

“Anything is possible,” Bialek said. “With everything that’s happened between our peoples, we may see a repeat of the good times – or the bad ones.”