Who is King Cyrus, and why is Netanyahu comparing him to Trump? 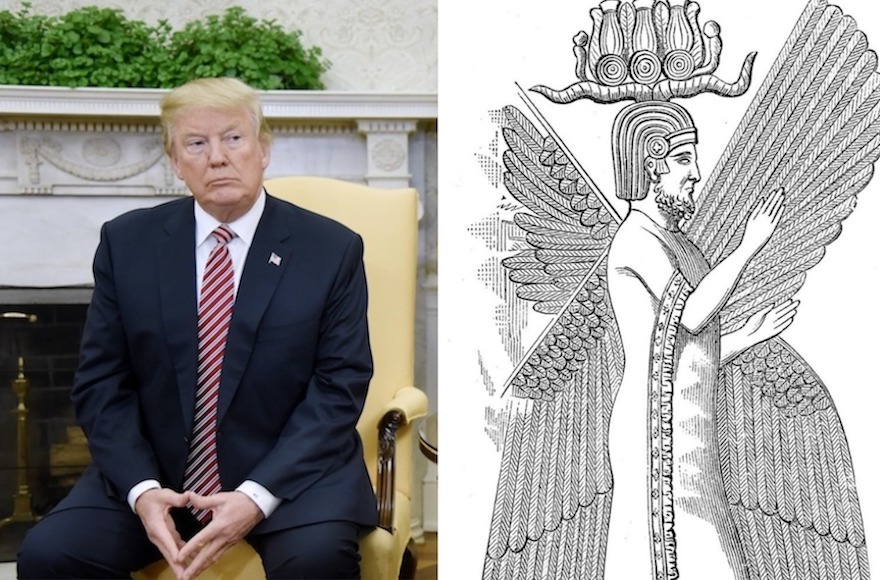 President Donald Trump in the White House, Feb. 9, 2018, and an illustration of Cyrus the Great. (Getty Images/Wikimedia Commons)
Advertisement

(JTA) — Before their Oval Office meeting on Monday, Prime Minister Benjamin Netanyahu of Israel lavished praise on President Donald Trump for, among other things, declaring Jerusalem as Israel’s capital and vowing to fix or scrap the Iran nuclear deal.

In doing so, the Israeli leader likened Trump to Harry Truman, Lord Balfour — and Cyrus the Great.

What gives with Cyrus?

As Netanyahu explained in his remarks:

I want to tell you that the Jewish people have a long memory, so we remember the proclamation of the great king, Cyrus the Great, the Persian king 2,500 years ago. He proclaimed that the Jewish exiles in Babylon could come back and rebuild our Temple in Jerusalem. We remember a hundred years ago, Lord Balfour, who issued the Balfour Proclamation that recognized the rights of the Jewish people in our ancestral homeland. We remember 70 years ago, President Harry S. Truman was the first leader to recognize the Jewish state. And we remember how a few weeks ago, President Donald J. Trump recognized Jerusalem as Israel’s capital. Mr. President, this will be remembered by our people through the ages.

What is known about Cyrus is as much myth as fact, although scholars agree that during his lifetime (c. 600-530 BCE) he ruled an empire that included the ancient Near East, Southwest and Central Asia, and the Caucasus. But Jewish tradition has been consistent in treating him as a pagan agent of God’s divine plan for Jews to return to the Land of Israel from their exile in Babylon (modern-day Iraq). Cyrus shows up in Chronicles saying, “The Lord, the God of heaven, has given me all the kingdoms of the earth and he has appointed me to build a temple for him at Jerusalem in Judah. Any of his people among you may go up, and may the Lord their God be with them.”

In Isaiah, God chooses Cyrus “to subdue nations before him and to strip kings of their armor … so that you may know that I am the Lord, the God of Israel.”

The first-century historian Josephus also credits Cyrus with freeing the Jews from captivity and helping them rebuild the temple in Jerusalem.

The idea that Trump is a modern-day Cyrus is particularly popular among evangelical Christians, in part to explain the gap between Trump’s, ahem, personal behavior and his support for policies that advance their agenda.

In December, an evangelical leader explained this “vessel theology” in welcoming Trump’s move on Jerusalem. Mike Evans told the Christian Broadcasting Network that Cyrus “was used as an instrument of God for deliverance in the Bible, and God has used this imperfect vessel, this flawed human being like you or I, this imperfect vessel, and he’s using him in an incredible, amazing way to fulfill his plans and purposes.”

Some observers wonder if the comparison is just a convenient way for evangelicals to deal with Trump’s multiple divorces, his confessed womanizing and the multiple accusations of sexual assault.

“I think in some ways this is a kind of baptism of Donald Trump,” John Fea, a professor of evangelical history at Messiah College in Harrisburg, Pennsylvania, told Vox. “It’s the theopolitical version of money laundering, taking Scripture to … clean [up] your candidate.”

In addition to Netanyahu, at least one Jewish group has picked up on the notion of Trump as Cyrus: Last month, The Mikdash Educational Center, which promotes reverence for the temples that once stood in Jerusalem, started selling a coin superimposing Trump’s silhouette over one of Cyrus. Its leader, Rabbi Mordechai Persoff, told The Associated Press that Trump, like Cyrus, made a “big declaration that Jerusalem is the capital of the holy people.”

Like most Israeli leaders, and maybe unlike rabbis and Christian activists, Netanyahu doesn’t need to reconcile a president’s personal behavior with his policies — he just needs a president who delivers the goods. Comparing Trump to Cyrus is another way of saying he’s just wild about Donald.