Netanyahu says solution may not include ‘full sovereignty’ for Palestinians 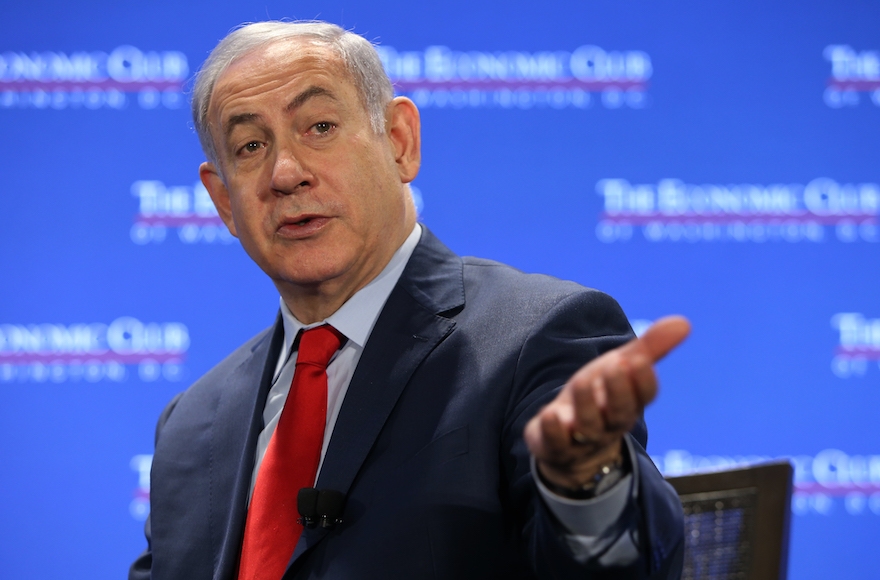 WASHINGTON (JTA) — Israeli Prime Minister Benjamin Netanyahu declined to say whether he now believes in a two-state solution, saying it was up to the Palestinians to prove that a sovereign state would not threaten Israel.

“I want a solution where they have all the power they need to govern themselves but none of the powers to threaten,” Netanyahu said Wednesday, addressing The Economic Club of Washington. “Does that comport with full sovereignty? I don’t know, but it’s what we need to live.”

Netanyahu’s conditions for a final status deal have not changed: He said as he has in the past that it is critical that Israel retain “overriding security” control in the West Bank, and that it control airspace.

However, in his remarks Wednesday — echoing a similar conversation he had Monday with Israeli journalists following his meeting with President Donald Trump — Netanyahu retreated from forecasting a two-state solution, language he had previously embraced.

“We will be ready in a future peace agreement to reach a solution where a demilitarized Palestinian state exists alongside the Jewish state,” Netanyahu said in 2009 in a speech at Bar-Ilan University delivered at the behest of the Obama administration.

Soon after assuming the presidency, Trump last year retreated from U.S. policy embracing two states, saying the ultimate contours of a deal should be up to the parties. The Palestinians officially endorse a two-state outcome. The Trump administration wants to revive Israeli-Palestinian peace talks.

Netanyahu since then has avoided mentioning two states. A year ago he disavowed a Likud party statement that he no longer believed in two states, but did not recommit to the premise. His comments in recent days are the the first time he has acknowledged that his preferred outcome might not result in Palestinian statehood.

The distinction is significant because under Netanyahu’s previous formulation, a sovereign Palestine could still conduct an independent foreign and trade policy, however demilitarized it was.

“Most people would agree to an arrangement of the kind you’re talking about if the Palestinians wanted a state next to Israel,” Netanyahu told his host, David Rubenstein, the president of The Economic Club, which brings together the Washington, D.C., business community with diplomats. Rubenstein, a financial consultant and philanthropist, had asked about a two-state solution.

Netanyahu said the media overstated his tensions with former President Barack Obama, but also acknowledged he had better relations with Trump, who has embraced Netanyahu’s rejection of the 2015 Iran nuclear deal.

“I had very good relations with all three of them but I disagreed with them” on Israeli national security issues, Netanyahu said, describing his interactions with Obama, Trump and Bill Clinton. He cited Obama’s deal with Israel guaranteeing it $38 billion over 10 years in defense assistance as an instance where he “deeply appreciated” the previous president.

“With President Trump, I have fewer disagreements,” he said. “It’s fair to say I don’t have any disagreements.”

Netanyahu’s overarching message to the crowd of businesspeople: Invest in Israel, a leader in technological innovation.

“If you’re not in Israel, you’re falling behind,” he said.

Netanyahu credited Israel’s intelligence services as a main driver of its economy. He said the skills acquired during military service helped create generation after generation of entrepreneurs.

In absolute numbers of personnel, the prime minister said, Israel had the second largest intelligence collection community in the world after the United States.

“We convert that sunk cost into thousands of startups,” said Netanyahu, using a term that describes unrecoverable spending.