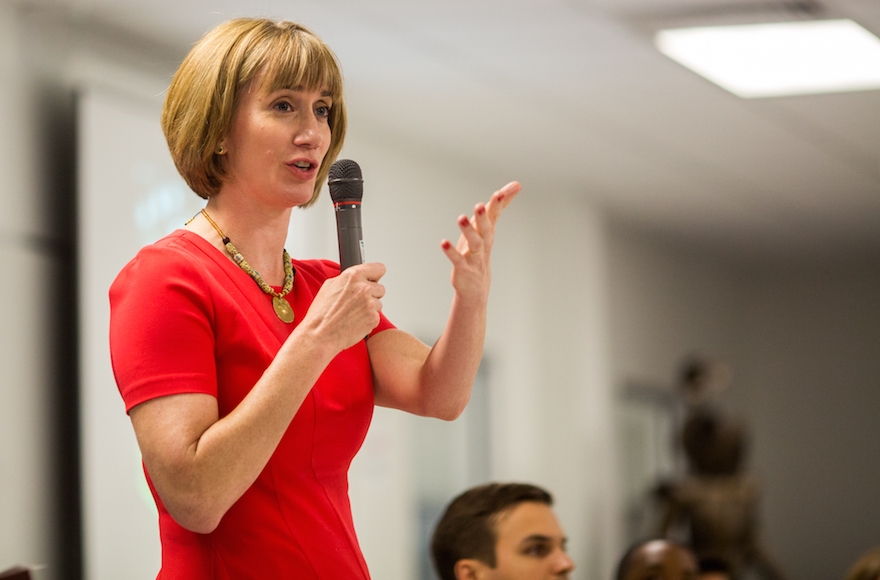 Laura Moser finished second in a Texas Democratic primary for a House seat to force a runoff in May. (Courtesy of Moser)

(JTA) — Laura Moser, a Jewish writer and anti-Trump activist, advanced to a runoff in the Democratic race for a Houston-area congressional seat.

Fletcher did not win a majority of the vote, so the two will advance to a runoff on May 22, Politico reported, with the winner to face incumbent Republican John Culberson in November. Opposition to President Donald Trump in the district, a Republican stronghold, has given Democrats hope of taking the seat in the midterm election.

In late February, the Democratic Congressional Campaign Committee, the House Democrats’ official campaign arm, infuriated progressives by inserting itself in the 7th District race by publishing opposition research against Moser, a progressive, pro-choice woman who has been a leader in the resistance to Trump. The committee condemned Moser as a “Washington insider.”

In 2017, Moser drew national attention when she created Daily Action, which enables subscribers to receive a text message every morning with a political action to take that day. She said it was an activism platform established in opposition to Trump.

Another Jewish candidate in the 7th, Debra Kerner, a member of the local school board, abandoned her bid last August.

Another Jewish woman lost her bid to be the Democratic candidate in the 16th district in Texas, encompassing El Paso on the border with Mexico. Veronica Escobar, a former judge, handily defeated Dori Fenenbock, the president of the local equivalent of the school board. The district is heavily Democratic. Its incumbent, Beto O’Rourke, is running for the U.S. Senate.