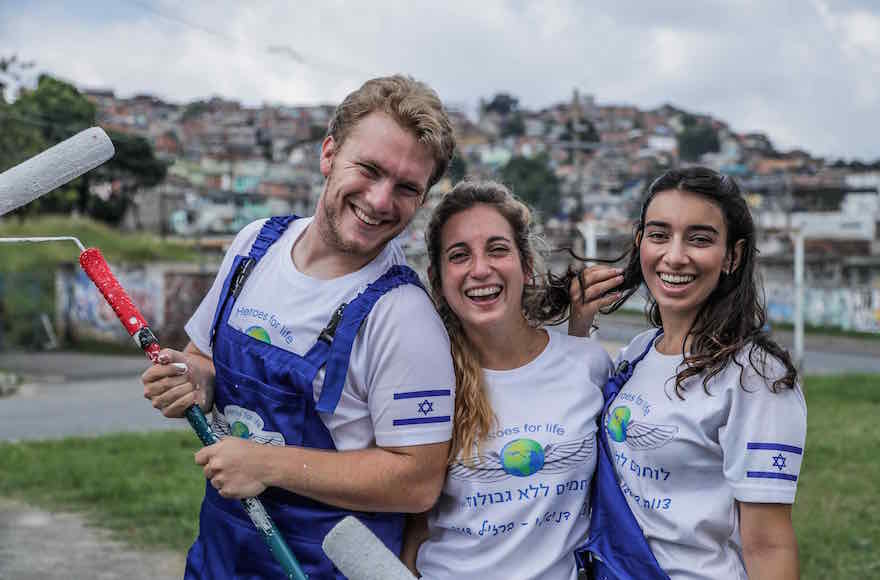 RIO DE JANEIRO (JTA) — A group of Israeli backpackers volunteered in Rio’s poverty-stricken favelas to honor the memory of a Brazilian youth killed in Israel.

The 25 Israeli youths, volunteering during their traditional post-army travels, served as emissaries of the non-profit association Heroes for Life. For a two-week period ending Friday, they renovated elementary schools and taught math and English to disadvantaged children hailing from the poorest sections of Brazil’s second largest city.

Sapir Ophir, 24, opted to join the delegation, dubbed the Danielle Team, to honor the memory of her Rio-born friend Danielle Sonnenfeld, who was killed three years ago at age 20 in a fatal car accident on her way home from volunteering in the oncology ward of Schneider Children’s Medical Center in Petach Tikvah, Israel.

Girlfriends Sapir and Danielle met for the first time 16 years ago while the Sonnenfelds were spending the winter in Israel.

“I remember that day on the beach, stopping for a selfie. Someone stopped us and asked if we were sisters. We looked each other in the eye, grinned, and chorused, ‘Yes!’ That moment lives inside me now, forever engraved upon my heart,” Ophir said.

They became fast friends, and their friendship deepened every year after the Sonnenfeld family made aliyah and settled permanently in Ra’anana, home to the largest Brazilian community in the Jewish state with nearly 250 families.

The delegation’s efforts were centered in a community center in the Pavuna neighborhood, situated in the outskirts of Rio de Janeiro and surrounded by favelas, Brazilian shantytowns characterized by severe poverty, crowding, lack of sanitation and nutrition, and pollution. Disease here is rampant and infant mortality rates are high.

“These are very difficult days in Brazil in general and Rio in particular with violence and disease greatly jeopardizing the lives of the population mainly the very poor, such as the ones the Danielle Team have assisted for the past couple of weeks,” Danielle’s father, Elio Moti Sonnenfeld, told JTA.

“The idea of spending a couple of weeks in local communities around the world doing important volunteer work with some of the poorest population in countries where Israeli youth after their military service go backpacking and leisure traveling for long months, is very positive and exciting, bringing much needed solidarity and light from Israel as a nation and as a people, into the world.”

Heroes for Life was founded in 2014 by three officers of the elite Duvdevan unit who, while journeying across the Far East, encountered hundreds of Israeli backpackers and tourists. The goal was to promote volunteerism while projecting a positive image of Israelis and their country.

“On top of the very healthy and important connection with the local Rio Jewish community, it makes us very proud of these real life heroes, the Israeli youth who sacrifice the best years of their lives for Israel and now a few weeks of their much deserved vacation, to enhance Israel’s name among the nations,” Danielle’s father added.

Gili Cohen, one of the founders of Heroes for life, said that the Danielle Team was the thirteenth delegation since the launch of the organization four years ago. Groups are annually dispatched to India, Nepal, South Africa, Guatemala, Mexico, Argentina, and Ethiopia, following mandatory volunteer service in Israeli orphanages.

“Heroes for Life is an excellent opportunity for male and female veterans to integrate ethical and honorable activities into their international travels, with emphasis on presenting Israel’s real face to the world.

“Every delegation that we send out is named for soldiers who fell in the line of duty or National Service volunteers who are no longer with us. It is a great honor of us to dedicate this delegation in memory of Danielle, zichronah livracha, who was a paragon of kindness and giving,” Cohen said, using a Hebrew phase meaning “of blessed memory.”