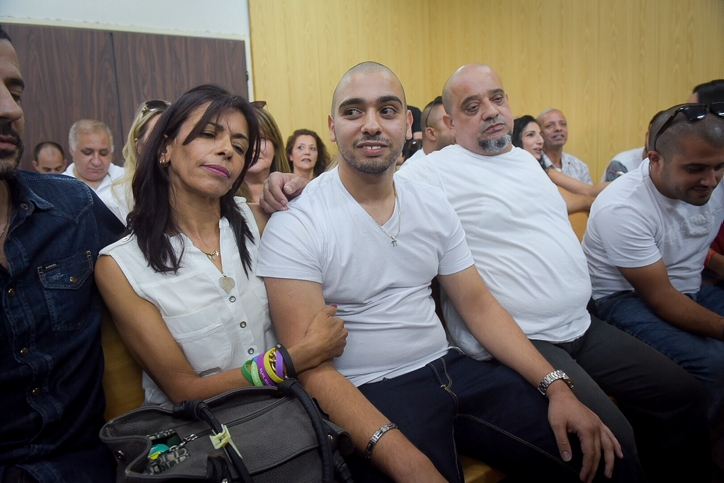 IDF Sgt. Elor Azaria, the Israeli soldier who shot dead a disarmed and injured Palestinian attacker in the West Bank city of Hebron on March 24, 2016, sits with his parents in the courtroom at the Kirya military base in Tel Aviv, before the verdict on his appeal on July 30, 2017. Flash 90 photo by Avshalom Sasoni/POOL
Advertisement

JERUSALEM (JTA) — The prison sentence for the former Israeli soldier convicted of shooting and killing an injured Palestinian terrorist as he lay on the ground was reduced by the military parole board.

Elor Azaria’s sentence was cut by one-third on Monday, with a release date of May 10. He has served seven months of a 14-month sentence.

Azaria had requested an immediate release ahead of Passover.

“I shot a murderous terrorist, release me today,” he reportedly told the court.

In September, the Israeli army’s chief of staff, Lt.-Gen. Gadi Eisenkot, shortened Azaria’s sentence to 14 months from 18 months. Eisenkot had earlier declined to pardon Azaria, who has not expressed remorse for the shooting.

In November, Israeli President Reuven Rivlin rejected Azaria’s request for pardon and the cancellation of his jail sentence for manslaughter. He entered prison in August.

A medic in the elite Kfir Brigade, Azaria came on the scene following a Palestinian stabbing attack on soldiers in the West Bank city of Hebron on March 24, 2016. One assailant was killed and another, Abdel Fattah al-Sharif, was injured.

Minutes later, while Sharif was lying on the ground, Azaria shot him in the head. The shooting was captured on video by a local affiliate of the Israeli human rights group B’Tselem.

Azaria was arrested that day and indicted nearly a month later. Autopsy reports showed that the shots fired by Azaria killed Sharif. Prior to shooting Sharif, Azaria had cared for a stabbed soldier.