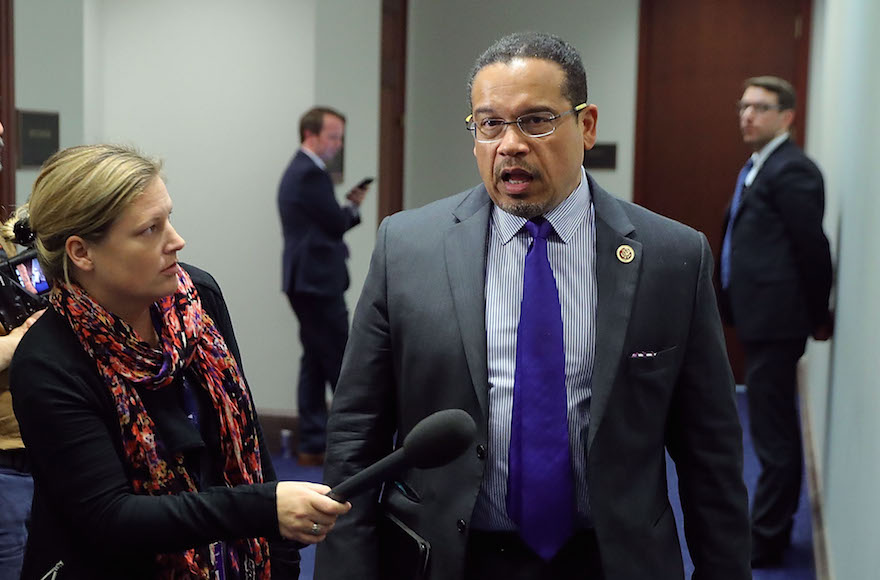 WASHINGTON (JTA) — Rep. Keith Ellison, the deputy chairman of the Democratic Party, said he has never had a relationship with Louis Farrakhan, the virulently anti-Semitic leader of the Nation of Islam.

He accused critics who are pressing him to explain his relationship to Farrakhan of trying to divide Jews and blacks, but also only alluded to his longtime association with the Nation of Islam.

“I do not have and have never had a relationship with Mr. Farrakhan, but I have been in the same room as him,” Ellison, D-Minn., wrote over the weekend on Medium, the blogging website.

“The right’s attempt to split the Jewish and Black communities is not going to work,” he said. “Now more than ever, when the right-wing is working to divide us by skin color, faith traditions and by our place of birth, human solidarity is critical to seeing us through this perilous time.”

Ellison, the first Muslim elected to Congress, said his encounters with Farrakhan since Ellison’s election to Congress in 2006 have been perfunctory, if that.

“About a decade ago, he and I had a brief, chance encounter in Washington, D.C.,” Ellison said, an apparent reference to a video that emerged recently of Farrakhan and Ellison in the same room at a mosque in Virginia’s Washington suburbs.

“In 2013, I attended a meeting in New York City with Iranian President Hassan Rouhani and nearly 50 others where I advocated for the release of an American political prisoner,” Ellison said, referring to reports that recently re-emerged of the dinner in New York, which was held during the U.N. General Assembly. “I didn’t know Mr. Farrakhan would be there and did not speak to him at the event.”

Ellison also for the first time unequivocally denied Farrakhan’s claim that the two met in a Washington hotel room in 2015 or 2016.

“Contrary to recent reports, I have not been in any meeting with him since then,” he said, referring to the 2013 U.N. gathering, “and he and I have no communication of any kind.”

Ellison condemned Farrakhan’s anti-Semitism, referring to the letter he wrote to Minnesota’s Jewish community in 2006 denouncing Farrakhan, the Nation of Islam and anti-Semitism.

“In a speech just last month he again attacked Jewish people with intolerant and divisive language,” he said, referring to a Farrakhan speech that drew attention because a leader of the Women’s March was present.

Jewish Democrats welcomed Ellison’s posting as well as other statements from African-American lawmakers whom conservatives have targeted in recent weeks for alleged ties with Farrakhan.

“Ellison’s statement leaves no ambiguity that he does not accept Farrakhan’s hateful and divisive preaching and we appreciate him reiterating this conviction. We also have been pleased to read similarly unsolicited statements from Reps. Barbara Lee (D-CA) and Gregory Meeks (D-NY) in recent weeks,” said a statement from the Jewish Democratic Council of America.

In the Medium article, Ellison only alludes to his own longtime relationship with the Nation of Islam.

“If you are a Black man from my generation, you remember the march,” he said, referring to the 1995 Million Man March initiated by Farrakhan. “I helped organize the march in my local community in Minneapolis. And I marched in it, along with civil rights leaders like Rosa Parks and Jesse Jackson.”

Ellison’s affiliation with the Nation of Islam lasted about a decade, and he was advocating for the group as late as 1998.