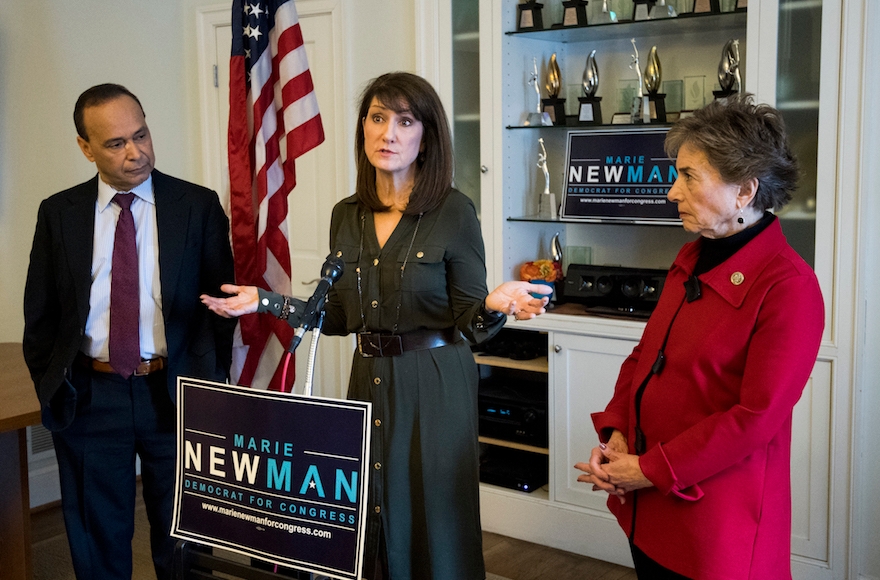 WASHINGTON (JTA) — Democrats in Illinois’ 3rd Congressional District are going to the polls Tuesday to choose their candidate in what is likely a surefire Democratic win in November. (The Republican is a Nazi. No, really. More on that in a minute.)

A weird feature about this race? Jews keep coming up in a primary in a district comprising parts of Chicago and its suburbs where there are virtually no Jews.

The Jewish Data Bank estimates that there are 7,000 Jews in the 3rd, a district of over 700,000 people — less than 1 percent. Compare that to neighboring districts 9 and 10, where Jews comprise about 11 percent of the population.

The 3rd is a diverse district packed with the European ethnic minorities who trend Democratic but are conservative on social issues. The incumbent, Dan Lipinski, did not endorse Barack Obama in the 2012 election and voted against Obama’s signature domestic policy achievement, the Affordable Care Act. Lipinski’s opponent,  marketing executive and political neophyte Marie Newman, is seen as the progressive candidate. She is pro-choice, a champion of lesbian, gay and transgender rights, and a supporter of universal health care.

More recently, Arab-American voters in the district have asserted themselves. Newman wooed them in a web ad that initially ran 3 minutes, 25 seconds. Much of the ad refers to past controversies including efforts to block the establishment of a mosque in the district and includes footage of Arab-American shops and businesses.

The campaign has since excised eight seconds from the ad, including a segment calling out Lipinski for supporting a law that would criminalize some kinds of support for the movement to boycott Israel. Also altered: A supporter says of Newman: “She doesn’t pander to special interest groups, like AIPAC.” The last two words are cut from the version currently online.

That led Bob Asher, a former president of the American Israel Public Affairs Committee, to blast out a fundraising email for Lipinski urging the maximum $2,700 donation.

“Dan’s opponent is catering to the anti-Israel population in the District,” he wrote. The email included Newman’s uncut ad, with the AIPAC mention.

Asher is not the only pro-Israel figure stumping for Lipinski: Five political action committees have raised $11,700 for him. (That does not count money that individual donors may earmark through PACs.)

Lipinski also voted against Obama’s signature foreign policy get: the 2015 Iran nuclear deal. J Street, the liberal Jewish Middle East policy group that supported the deal, raised $50,000 for Newman through its affiliated PAC and has contributed another $25,000 to a progressive initiative spearheaded by NARAL, the reproductive rights advocacy group. (Lipinski is pro-life.)

That left-vs.-center dynamic reflects broader battle lines: Our Revolution, the movement launched by Sen. Bernie Sanders, I-Vt., after his insurgent bid in 2016 to win the Democratic presidential nomination, has endorsed Newman.

Various PACs affiliated with the No Labels movement, the coalition of centrist Democrats and Republicans seeking to build a moderate middle ground, are raising big bucks for Lipinski. A leading contributor to the No Labels-affiliated PACs is Jerry Reinsdorf, the Jewish part owner of Major League Baseball’s Chicago White Sox and the NBA’s Chicago Bulls. (Lynn Sweet at the Chicago Sun-Times reported the lines between the PACs and No Labels.)

Whoever wins will face Arthur Jones as the Republican opponent. Jones secured the GOP nomination because no one else sought it in a district that’s seen as a Democratic sure thing.

Jones’ default nomination has set national Republicans to rethinking the practice of not running candidates in no-win districts: He’s a former leader of the American Nazi Party and an unrepentant Holocaust denier.

Illinois Republican Party Chairman Tim Schneider told CNN last month that his organization “and our country have no place for Nazis like Arthur Jones. We strongly oppose his racist views and his candidacy for any public office.”

But even this consensus issue — no Nazis for Illinois — came with an Israel twist. According to reports last week, a pro-Israel activist taking part in a No Labels get-out-the-vote texting effort spread the falsehood that Newman was a Holocaust denier. No Labels said the volunteer texter confused Newman with Jones. (JTA asked the texter for comment, but she did not reply.) Newman wants an apology because, guess what: Her husband is of Jewish heritage.

“Dan Lipinski is playing politics with a tragedy in human history that cost the lives of millions — and which deeply affects those of Jewish heritage, including my husband and his family,” she told Patch.