The Rothschilds and the weather: What you need to know about the anti-Semitic conspiracies about the banking family 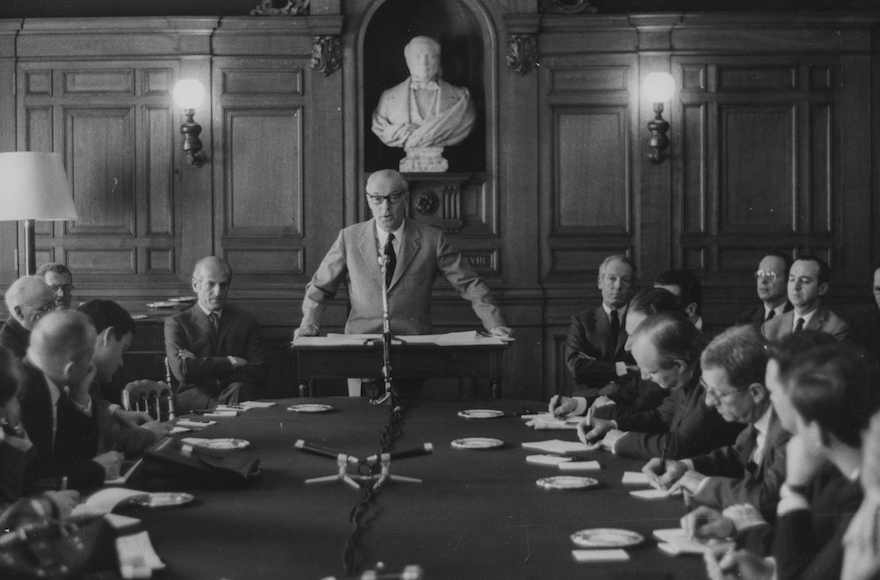 (JTA) — The Rothschild family is historically Jewish and famously wealthy. They do not control the weather. Or the U.S. government.

That much is now apparent to Trayon White, a member of the Washington, D.C. City Council who claimed, on two separate occasions recently, that the Rothschilds were behind various plots to control the U.S. government, the World Bank and/or the weather. A video he posted to Facebook blaming the Rothschild family for this week’s snowstorm went viral and drew broad condemnation.

“Y’all better pay attention to this climate control, man, this climate manipulation,” he said in the video. “And D.C. keep talking about, ‘We a resilient city.’ And that’s a model based off the Rothschilds controlling the climate to create natural disasters they can pay for to own the cities, man. Be careful.”

On Tuesday, White issued a lengthy apology, explaining that his comments were based off misinformation and that he did not know his statements were anti-Semitic. He apologized for offending the Jewish community, and has since met with local Jewish leaders as part of his pledge to become educated on the issue.

“I have hurt and disappointed many, including myself, my Council colleagues, constituents and countless members of the Jewish community here and abroad,” he wrote. “In all honesty, if I were of Jewish descent, I would also feel disrespected and offended by such comments. Honestly, I do not [at] all believe the Jewish community controls the weather.”

White is hardly the first to repeat a conspiracy theory about the Rothschilds, who for centuries have been one of Europe’s wealthiest families. Today, two Rothschilds appear on Forbes’ list of billionaires, and the family has investment firms in Switzerland, France and elsewhere. Their wealth dates back to the 18th century, when Mayer Amschel Rothschild, who was born in the local Jewish ghetto, became the banker of Wilhelm IX, a local nobleman.

The elder Rothschild spread his enormous wealth to his five sons, who began separate banking dynasties in London, Paris, Frankfurt, Vienna and Milan. Since then, the family has remained wealthy, and has also established itself philanthropically. Rothschild donations were crucial to the survival of the early Zionist settlements in Palestine, and the family continues to give philanthropically in Israel and elsewhere.

But this long-held wealth has also led to a special brand of anti-Semitic conspiracy theories. Anti-Semites have long accused Jews of nefariously controlling the world’s money and governments through a secret cabal, and that the Rothschilds have branches in several countries fits these feverish fantasies. Jews tend to see conspiracy theories about them as attempts to smear Jews as a whole.

The first prominent conspiracy theory about the Rothschilds appeared in 1843, when Nathan Rothschild, who founded the family’s London branch, was falsely accused of making a killing on the stock market because he had advance word of Napoleon’s 1815 defeat at Waterloo. He didn’t, and he hadn’t. In 2015 the Independent, a British publication, provided what it called definitive proof that the accusation was false — and wondered why the smear had persisted for so long.

Since then, conspiracy theories against the Rothschilds have only multiplied, and have spread across the political spectrum. A YouTube search of the word “Rothschilds” yields pages of results. Most of them allege that the family is behind shadowy groups like the Illuminati or a New World Order, or is otherwise taking over the world.

Trayon White’s remarks appear to echo the latest smear, linking the family to the Rockefeller Foundation’s Resilient Cities initiative, as the Washington Post reported this week. According to the theory, grants from the foundation to cities like Washington, D.C. are part of a secret scheme for global domination. Apparently, the Rothschilds have access to technology that causes the kind of freak weather currently linked to climate change, and use it to drive people out of farms and rural areas into inner cities.

“This a genocide program,” says California conspiracist Deborah Tavares in a YouTube video cited by the Post. “We are being moved now into what they call ‘resilient cities.’ And it’s important to get this word out, start looking it up: Resilient cities. Understand what this is: This is a plan brought in by Rothschild and Rockefeller.”

In recent years, in the U.S. and Europe, other Jewish financiers have taken the place of the Rothschilds in the minds of bigots. Chief among these is George Soros, a Hungarian-American Jewish businessman and liberal philanthropist who is a favorite target of the far right on both sides of the Atlantic.

Last year, the right-wing government of Hungary posted billboards — widely decried as anti-Semitic — claiming that Soros was behind efforts to oppose its policies on migrants. Yair Netanyahu, son of Israeli Prime Minister Benjamin Netanyahu, caused controversy in Israel when he posted, then deleted, an anti-Semitic cartoon with Soros’ face to his Facebook profile.

But White’s misstep is one of many proofs that theories about the Rothschilds still have currency on the fringes of society, no matter how many times they’ve been debunked.