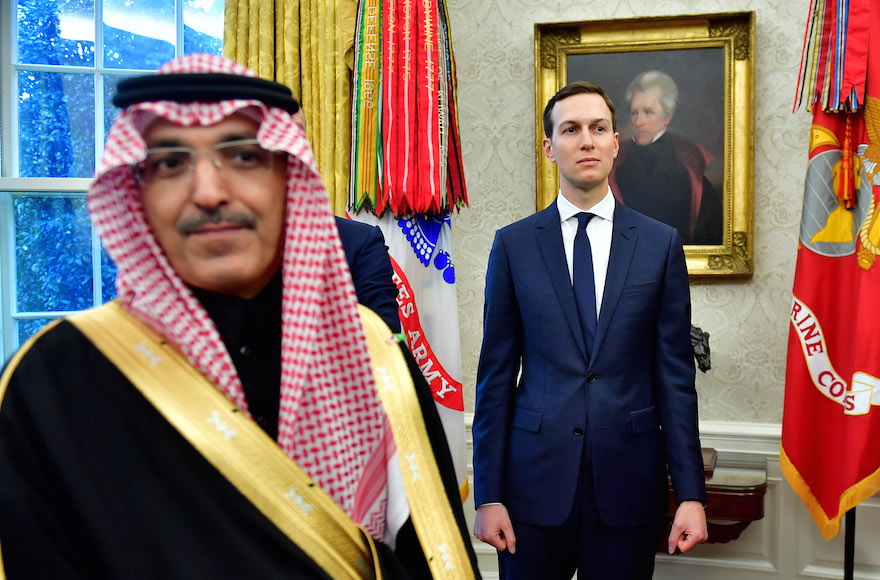 Jared Kushner alongside a member of the Saudi Delegation during a meeting between President Donald Trump and Crown Prince Mohammed bin Salman of the Kingdom of Saudi Arabia in the Oval Office of the White House, March 20, 2018. (Kevin Dietsch/Pool/Getty Images)
Advertisement

(JTA) — Saudi Crown Prince Mohammed bin Salman may be using his close relationship with White House adviser Jared Kushner to send a message to his allies and enemies that his actions were backed by the U.S. government, a U.S. government official told The Intercept.

Kushner, who is the son-in-law of President Donald Trump, and the crown prince had a late October meeting in Riyadh.

A week later, Mohammed began what he called an “anti-corruption crackdown.” The Saudi government arrested and jailed dozens of members of the Saudi royal family in a Riyadh hotel – among them Saudi figures named in a daily classified brief read by the president and his closest advisers that Kushner read avidly before he lost his top-secret security clearance in February, The Intercept reported Thursday.

According to the report, Mohammed told confidants that he and Kushner discussed Saudis identified in the classified brief as disloyal to Mohammed. While it is likely that Prince Mohammed could independently learn who were his critics, he may have wanted to let it be known that Kushner shared that information with him in order to show his close relationship with the United States, the unnamed U.S. official said.

If Kushner discussed the names with the Saudi prince without presidential authorization, he may have violated federal laws around the sharing of classified intelligence, according to the Intercept.

The Saudi crown prince bragged to the United Arab Emirates Crown Prince Mohammed bin Zayed and others that he had Kushner “in his pocket,” an unnamed source who talks frequently to confidants of the Saudi and Emirati rulers told The Intercept.

The online publication cited a senior Western official and a source close to the Saudi royal family that Kushner has communicated directly with both the Saudi and Emirati crown princes on WhatsApp, a popular messaging app owned by Facebook.

Kushner’s attorneys have since told him not to use the app for official business, according to The Intercept, citing a source with direct knowledge of the exchange between Kushner and his legal team.

Trump’s support in May of an economic blockade of Qatar by Saudi Arabia and the UAE over the objections of then-Secretary of State Rex Tillerson has raised questions about a possible conflict of interest for Kushner. The blockade came after former Qatari Prime Minister Sheikh Hamad bin Jassim al-Thani declined an offer to invest in the Kushner Company’s flagship building in Manhattan, which is now in financial crisis.