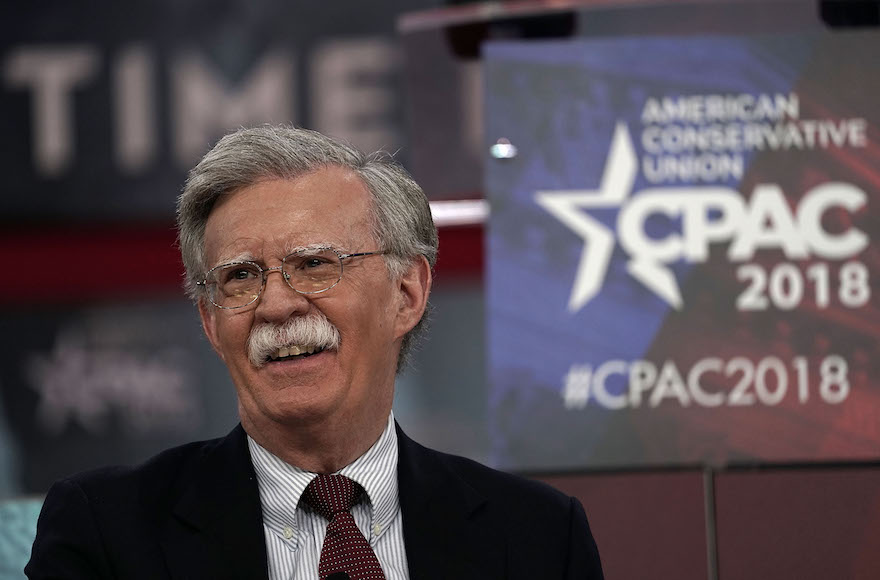 WASHINGTON (JTA) — President Donald Trump named as his national security adviser John Bolton, a hawk who has said military strikes may be inevitable as a means of preventing Iran from acquiring a nuclear weapon.

The White House announced Thursday evening that H.R. McMaster was leaving the position and Bolton would take his place by April 9.

“General McMaster’s leadership of the National Security Council staff has helped my administration accomplish great things to bolster America’s national security,” Trump said in a statement. “He helped develop our America First National Security Strategy, revitalize our alliances in the Middle East, smash ISIS, bring North Korea to the table, and strengthen our nation’s prosperity.” ISIS is one of the bynames for the Islamic State.

Naming Bolton suggests that Trump is ready to pull out of the 2015 Iran nuclear deal by May 12, the deadline to waive sanctions. The agreement trades sanctions relief for a rollback of Iran’s nuclear program. Bolton is a staunch opponent of the deal, as is Mike Pompeo, the CIA chief Trump nominated last week to replace Rex Tillerson as secretary of state.

Bolton has said on multiple occasions that striking Iran to stop it from going nuclear may be inevitable.

“I don’t make any disguise of the idea that ultimately it may take an Israeli strike against Iran’s nuclear program to stop it,” he told the conservative Washington Free Beacon in August.

Tillerson and McMaster both don’t like the deal but counseled not pulling out of it because Iran is complying with its narrow strictures, and leaving would remove whatever leverage the United States has with its allies to pressure Iran outside the deal’s confines. That leaves James Mattis, the defense secretary, as the only Cabinet-level official who opposes leaving the deal.

Bolton has close relations with the pro-Israel community stemming from his success in 1991 in getting the United Nations to rescind its Zionism is racism resolution. Bolton at the time was the assistant secretary of state for international organization affairs under President George H.W. Bush.

Bush’s son, George W. Bush, nominated Bolton as ambassador to the United Nations in 2005 and named him acting ambassador. Bolton never cleared the Senate nominating process, in part because of his hawkishness on Middle Eastern issues, but also because subordinates at the State Department emerged to describe him as an abusive boss. Bolton under the younger Bush had been the undersecretary of state for arms control and international security affairs.

Pro-Israel groups, including the American Israel Public Affairs Committee, at the time broke with their protocol against endorsing a nominee and lobbied for Bolton’s confirmation, but to no avail. Bolton was forced to step down from the U.N. post.

McMaster got along well with his Israeli counterparts, but angered some on the right wing of the pro-Israel community because of reports that he blocked Trump’s recognition of Jerusalem as Israel’s capital. Trump ultimately recognized Jerusalem in December.

Morton Klein, who heads the hawkish Zionist Organization of America, called Bolton a “spectacular choice” to lead the NSC.

“He understands the Arab Islamic war against Israel and the West,” Klein tweeted. “Bolton is a patriot and an ardent clear thinking Extraordinary supporter of Israel. He testified with me to move the Embassy, opposes the disastrous Iran Deal.”

“It’s hard to escape the disquieting conclusion that the mass exodus of the ‘adults’ from this Administration is putting our nation’s security at risk,” he tweeted. “Ambassador Bolton’s hawkish and conspiratorial thinking will only make matters dangerously worse.”

In February, Bolton wrote an op-ed in The Wall Street Journal urging the United States to use force to solve the nuclear standoff with North Korea.