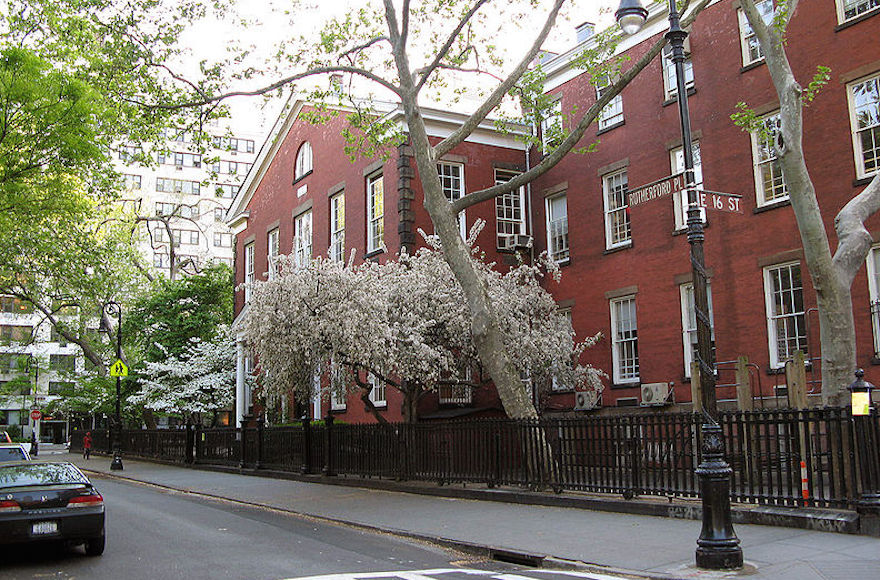 A view of the Friends Seminary in New York City. (Wikimedia Commons)
Advertisement

NEW YORK (JTA) — Students and alumni at a Quaker-run private school in Manhattan are rallying around a teacher who was let go after making a joking Nazi salute in his 11th grade mathematics classroom.

Ben Frisch, a teacher at Friends Seminary, was fired for saying “Heil Hitler!” while raising his arm to illustrate what in basic geometry is known as an obtuse angle.

The school’s principal, Robert Lauder, explained Frisch’s firing in a letter to the community.

“Our students know that words and signs of hate and fear have no place at Friends,’’ he wrote. Lauder cited the Feb. 14 incident and “other equally inappropriate and troubling actions by Ben.”

But a petition circulated among the upper school’s 279 students drew 190 signatures voicing support for Frisch, who has been a teacher at Friends for 34 years. Alumni also launched a petition, which has drawn 469 signers, and students and some faculty joined a walkout to protest his firing

“I think we all can agree that whatever happened, Ben’s intentions were not malicious or bigoted. He has always been devoted to Quaker principles of nonviolence and fighting injustice and has not a hateful bone in his body,” according to the alumni petition. “It sounds like he found himself in an awkward situation and made an awkward joke.”

The New York Times, which first reported his firing, noted that Frisch, while himself a practicing Quaker, is the son of an Austrian Jewish man whose grandparents were killed in the Holocaust. The school’s enrollment is about one-third Jewish, The New York Jewish Week reported in 2012.

“I would have been gravely disappointed if the school had kept him,” she said, “and would have been extremely unhappy and uncomfortable to have my child in that classroom next year.”

Times columnist Gina Bellafante countered, “At the same time an adherence to the values of forgiveness and restorative justice that institutions like Friends promote would seem to demand a path — reprimand, rehabilitation — other than firing someone who made people uncomfortable.”

Frisch is challenging his termination.