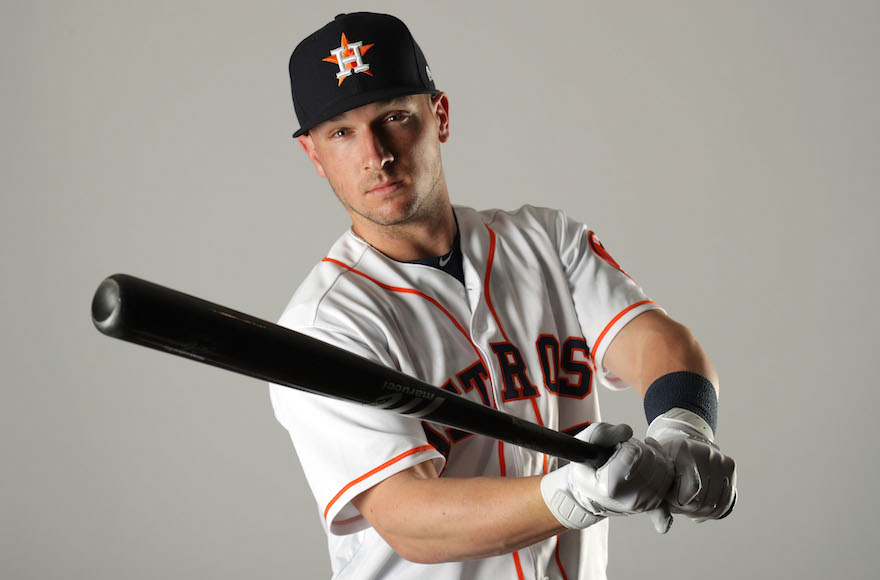 WEST PALM BEACH, Fla. (JTA) – Sitting on a couch near his locker at the Houston Astros’ spring training facility here in mid-March, Alex Bregman is reflecting about an encounter his father had at the World Series last fall.

It was in Los Angeles, between innings of the opening game. Sam Bregman was headed for a Dodger Stadium concession stand to grab a nosh wearing his Astros jersey with the No. 2 and his surname stitched on the back – a facsimile of his son’s uniform. The young Bregman, a third baseman, had just slugged a home run off Dodgers ace Clayton Kershaw.

“I am,” the elder Bregman replied.

The man was a Dodger fan, but still he flashed what Sam Bregman described as “a look of great contentment” at the ballplayer’s heritage.

“I got such a kick out of it,” Sam Bregman said in a phone interview near his home in Albuquerque, New Mexico. “It made me feel so proud.”

Alex Bregman’s take on the encounter: “It’s definitely cool to have fans around the world give their support. It keeps you motivated to know that everyone has your back.”

Bregman can expect to have more fans on his bandwagon, Jewish and otherwise, following a strong 2017 season and the first World Series title for the Astros — to which he contributed mightily. He knocked in a run in each of the first five games, added a second home run, threw out a runner at home plate to preserve a scoreless tie in Game 4 and had the run-scoring single that ended an epic Game 5 in the 10th inning, 13-12. 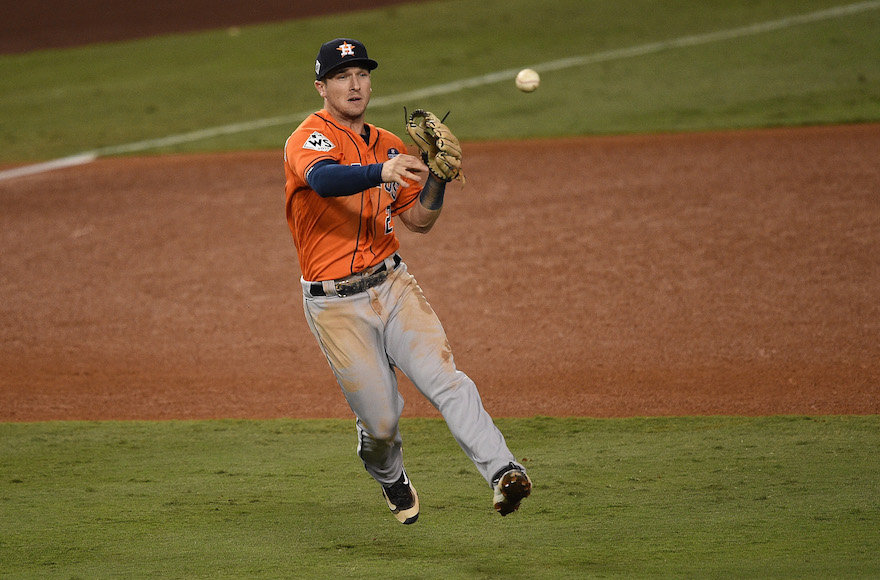 Two days after the Game 7 road victory, Bregman celebrated at the championship parade in Houston. Thousands of fans lined streets in a city still recovering from Hurricane Harvey flooding a couple of months earlier.

“To see their pure joy,” Bregman said, “gave me the chills.”

The experience capped a memorable year for Bregman that began with his playing for the U.S. team that won the World Baseball Classic title in March.

Israel’s squad, which finished sixth overall in the WBC, had sought his services.

In retrospect, he said, “I probably should’ve” played for Israel “because I got [just] four at-bats” playing as a backup for the American team. Regardless of who comes calling in 2021, Bregman said, he’s unlikely to participate.

His Astros will start defending their championship on Thursday in Arlington, Texas, against the Rangers. Bregman will turn 24 the next day.

“There are a lot of things I want to accomplish in this game. Winning is right there at the top,” Bregman said. “We have a great team to repeat as champs.”

Astros manager A.J. Hinch said he expects Bregman to “build off the momentum he generated in the postseason and throughout the whole season last year.”

“While he’s established himself as a major league player … he’s not even close to what he’s going to be,” Hinch said. 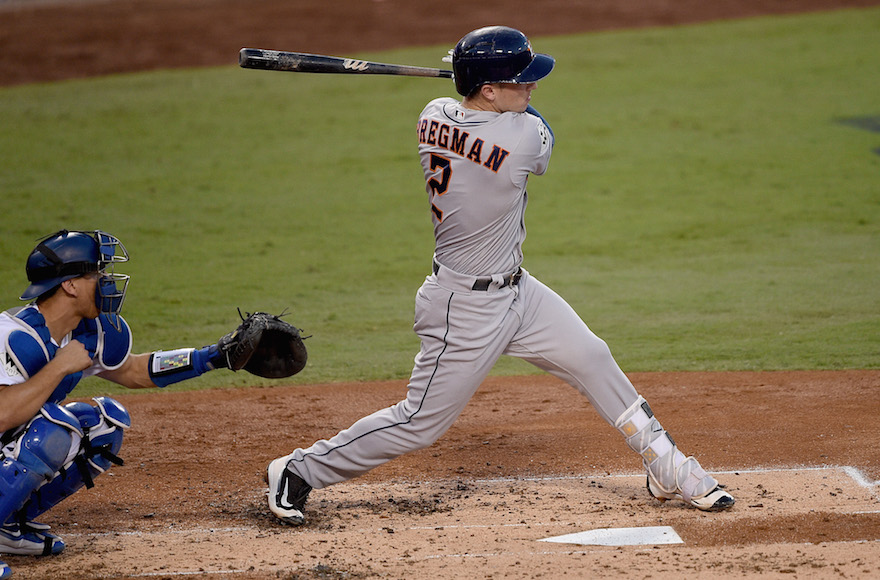 He called Bregman “a true baseball rat,” someone who “loves the game, loves practice, loves being around his teammates.”

But his mother, Jackie, will tell you that her son is more than about baseball. His foundation, AB for AUDS, provides computer tablets to children with autism and Down syndrome. Brady Columbus, a son of Bregman’s former hitting coach and Bregman’s godson, is autistic.

“Alex is so patient with people, and I’m really, really proud of him for that,” she said in a phone interview.

She recalled her son defending elementary school classmates being bullied. And he was also on the other end: A boy made fun of Alex’s pending bar mitzvah as he was leaving school to meet with the cantor, and a Chinese-American teammate on Alex’s basketball squad stood up for him.

The experiences, she said, “taught him what it was like to be marginalized.”

Years ago, the family attended an appearance by several players of the minor league Albuquerque Isotopes. One player was aloof.

But Jackie Bregman also knows her son is driven to excel on the field.

“He would not mince words. ‘I don’t just want to play baseball; I want to be the best,’” Jackie Bregman remembered her son saying. “He was determined.”

“Alex took that so literally that he’d hit in the batting cages until he got calluses,” recalled Sam Bregman, who had grown up on the field at Robert F. Kennedy Stadium, where his late father, Stan, worked as a lawyer for the Washington Senators. It was Stan, “Grandpa Zayde,” who gave his grandson  a card set of Jewish baseball players.

Someone else who witnessed that commitment was Darvin Ham, who coached the New Mexico Thunderbirds, an NBA Development League team the Bregmans owned. 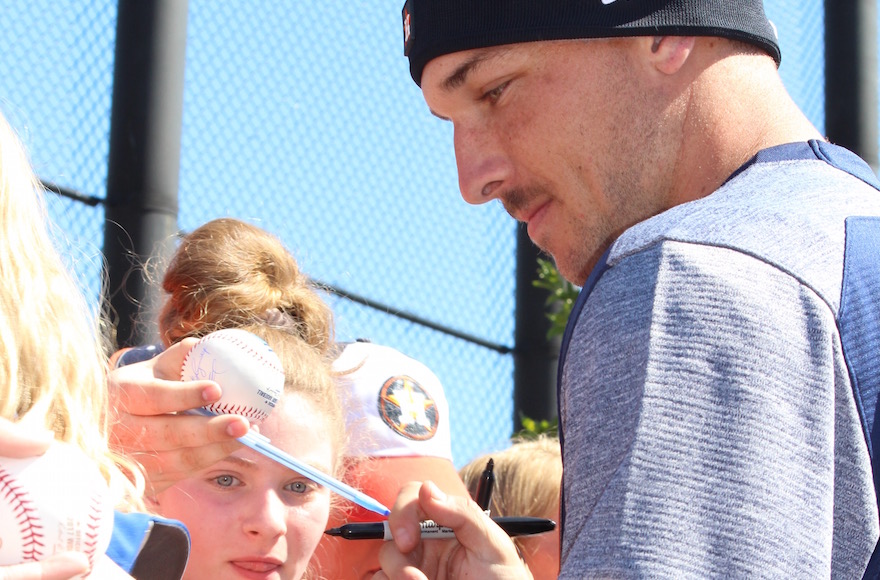 In postgame conversations and at the Bregman home, Alex Bregman “was like a sponge” of information about the makings of athletic achievement, said Ham, now an assistant coach with the Atlanta Hawks.

“He was a very good listener. He took mental notes,” said Ham, who considers Alex Bregman “a little brother.”

“Coach Birmingham said you have to decide,” he recalled. “I woke up at 5 a.m. to go to the cage to school to the cage: defense and hitting. I did that every day for years, [beginning at] probably age 12 or 13. I never went to the school dance.”

On this day, Bregman departed for a practice field and chatted in Spanish with fellow infielders Jose Altuve and Carlos Correa, natives of Venezuela and Puerto Rico, respectively, at second base during a running drill. Bregman is fluent in the language.

Jerick Paquinto, a 19-year-old from Houston wearing a Bregman jersey, was among hundreds of fans watching.

“I like that he’s not the biggest guy and he has a lot of heart,” Paquinto said of the 6-foot Bregman, words similarly applicable to the 5-foot-6 Altuve, last year’s American League MVP. “I liked him since he was at LSU [where Bregman was a first-team All American at shortstop]. I saw him hit a homer, and I fell in love with him as a player.”

The trio jogged toward a batting cage, Bregman stopped to sign autographs after he finished hitting. He’ll be signing plenty more when the Astros come home next week for their opener at Minute Maid Park. His parents will be there.

Sam Bregman joked about guarding the championship ring his son will receive.

“I know that the Jewish community around the country is so proud of him,” Jackie Bregman said. Referring to the card collection of Jewish players, she added, “I hope that one day he’s in that collection.”