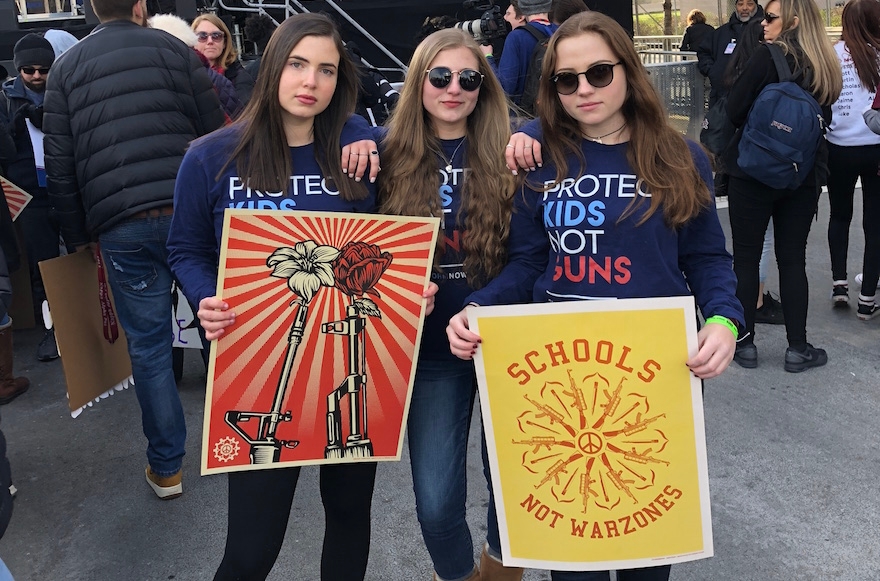 Emily Bernstein, left, a Jewish student from Marjory Stoneman Douglas High School in Parkland, Fla., who escaped the gunman on the day of the massacre, with other activists at the March for Our Lives rally in Washington, D.C., March 24, 2018. (Courtesy of Bernstein)
Advertisement

On the day of the mass shooting at Marjory Stoneman Douglas High School in Parkland, Florida, Matthew Youkilis, 17, was on a plane from Ohio heading to his Jewish youth group’s convention in Orlando.

Sitting in the airport and watching the news on the overhead TV, he prayed for the best. Only when he touched down in Orlando did he learn that his cousin, Jaime Guttenberg, 14, was among the 17 dead. Feeling numb, Matthew left the convention to attend her funeral.

“There was no way to comprehend it,” he said. “She was my little cousin. I was never supposed to see something like this.”

Very quickly, his grief and disbelief gave way to activism. A Midwestern regional president of the pluralistic Jewish youth organization BBYO, Matthew Youkilis joined other Jewish teens from Ohio in organizing a delegation of nearly 250 students to lobby lawmakers at the state capital, Columbus, on March 14 — the day of the national school walkout against gun violence.

Last weekend, he joined the March for Our Lives rally in Washington, D.C., a demonstration against gun violence and for school safety that drew hundreds of thousands to the nation’s capital and  was replicated by other marchers in cities and towns around the world.

“He who saves one life, it is as if he has saved the entire world,” Matthew said, citing an oft-quoted Talmudic maxim in explaining how Jewish values drive his activism.

Matthew is part of a wave of young Jews who are finding their voices, mobilizing and taking political action in the wake of the Feb. 14 Parkland shooting.

Often they are getting support from their Jewish youth movements. BBYO, for example, is using its social media and web presence to amplify its young members’ voices and help them organize. In advance of the March for Our Lives rally, high school students affiliated with the group arranged meet-ups, hospitality and a “Shabbat for Our Lives” dinner and program in the Maryland suburbs of Washington so that families could attend the march. 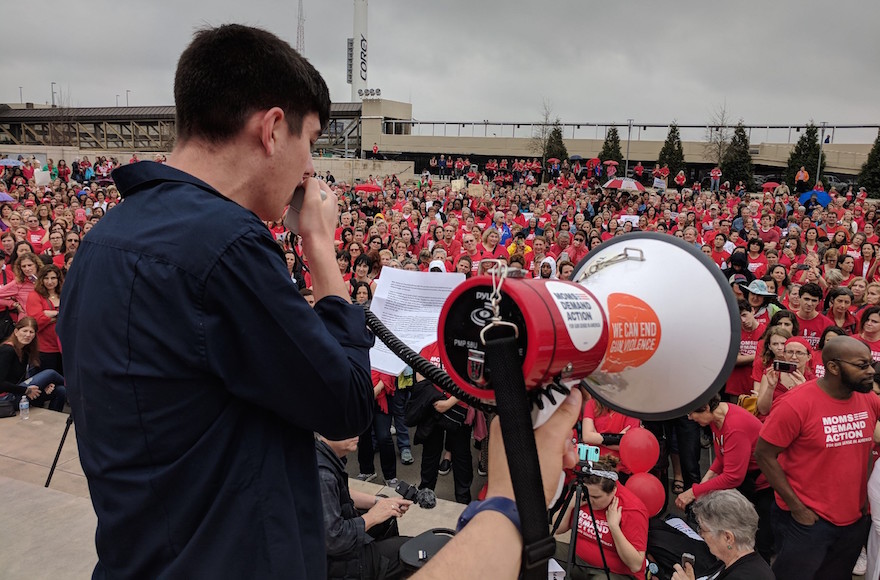 Jacob Busch, a senior at Chamblee Charter High School in Atlanta, speaking at a Moms Demand Action rally in Georgia a week after the Parkland massacre, Feb. 21, 2018. (Courtesy of Busch)

In many ways, BBYO is a natural venue for organizing. Set up as an “experiential democracy,” the group provides members with a platform to gain leadership skills — running for chapter and regional office, public speaking, goal setting, marketing. That enables teens to advocate for their social and political interests, including philanthropy, environmentalism, Israel, social entrepreneurship and LGBTQ rights, according to those involved with the organization.

Hayley Siegel, the BBYO chapter president in Parkland, was among the students who escaped Marjory Stoneman Douglas the day of the shooting. Hayley, 17, survived by running out of the back of the building with her hands above her head. She knew most of the murdered students and counted two as friends: Guttenberg and Helena Ramsay, 17. After the shooting, the CEO of BBYO, Matthew Grossman, went to Florida to visit with student survivors, including Hayley.

Now Hayley is planning to go in April to Tallahassee, Florida’s capital, to lobby lawmakers on school safety. She says the fight against gun violence and for school safety is a clarion call for Jewish youth.

Hayley’s mother, Debbi Siegel, said the skills her daughter has learned in BBYO have “taught her to speak in public, to be a leader, to make friends from all over the world and to be compassionate.”

Emily Bernstein, a junior at Marjory Stoneman Douglas, was another one of the Jewish teens at the school on the day of the shooting. Sitting in darkness and silence, and huddled in fear while the gunman carried out his massacre, Emily decided afterward that she would never again be silent.

“We’re putting down our phones and demanding action. We’re coming out from Columbine to MSD and every mass murder in between,” she wrote on Facebook.

“It has to end here. We cannot change what already occurred but we do control what happens in the future,” she wrote. “Like Elie Wiesel said, ‘never again.’ We will not let the 17 beautiful angels die in vain.”

The fact that five Jews were among the dead in the Parkland shooting — Guttenberg and fellow students Meadow Pollack, Alex Schachter and Alyssa Alhadeff, along with teacher Scott Beigel – has fueled the Jewish teen push to activism, teens say.

“I felt I needed to respond to the tragedy of the Jewish people and others killed, to stand up and put my foot down,” said Jacob Busch, 17, a senior at Chamblee Charter High School in Atlanta and an international youth board member of BBYO.

Jacob was among those who spoke before a crowd of 1,500 at the Moms Demand Action rally at the Georgia Capitol last month and at Atlanta’s March for Our Lives rally.

Allison Goldring, 17, another BBYO member and also a cousin of Jaime Guttenberg, said she has been writing letters to lawmakers in her home state of Georgia urging that they take up new gun laws.

Even though hers is a state with strict conservative views, Allison said she was hopeful there will be some change. She said she would like to do more, but as a senior at Chattahoochee High School in Johns Creek, she must attend to college plans.

Yet the violence of American society is forcing her — and her generation — into action.

“I’m scared when I go to school,” Allison said. “It takes me several minutes to walk in. Something so mundane as school has turned into a crime scene.”

Jacob Busch said the movement for school safety is galvanizing not just members of BBYO, but those of other Jewish youth groups, including the Reform movement’s North American Federation of Temple Youth, or NFTY, and the Conservative movement’s United Synagogue Youth, or USY.

“Jewish teens in BBYO, NFTY and USY are involved not just because some of those killed were Jewish teens who went to Jewish camps,” he said. “As Jewish teens, community to community, we are dedicated to service and watching out. The world is in need of repair, and there is no more time to sit back and watch events unfold.”