The US, and the world, need our anti-Semitism monitor more than ever 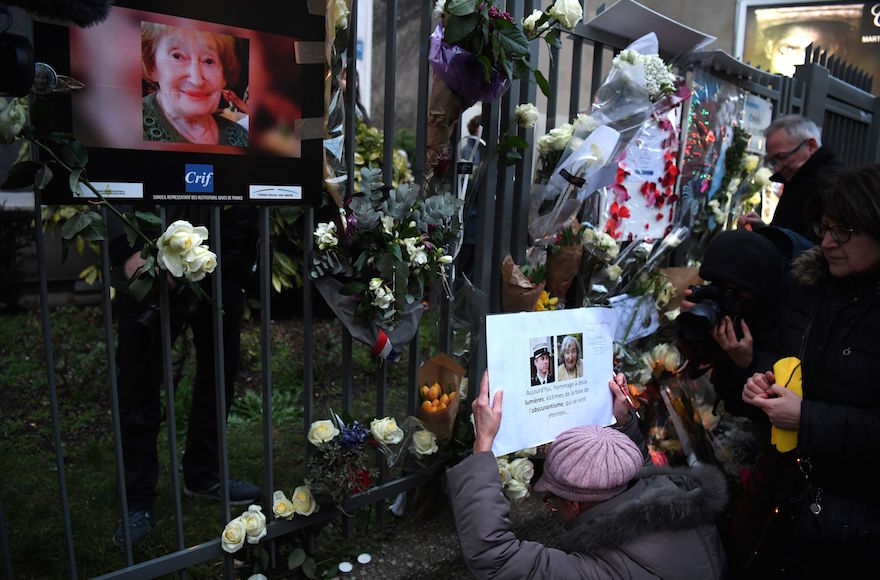 A woman holds a photograph of slain Lieutenant-Colonel Arnaud Beltrame and Mireille Knoll as she gathers with others at the entrance to an apartment building in Paris on March 28, 2018, at the conclusion of a march in memory of Mireille Knoll, the 85-year-old Jewish woman murdered in her home in what police believe was an anti-Semitic attack. The partly burned body of Mireille Knoll, who escaped the mass deportation of Jews from Paris during World War II, was found in her small apartment in the east of the city on March 23, by firefighters called to extinguish a blaze. / AFP PHOTO / ALAIN JOCARD (Photo credit should read ALAIN JOCARD/AFP/Getty Images)
Advertisement

Last week, many of our constituents, as well as Jewish families here and abroad, sat down for a seder to commemorate the Exodus story of Passover. Anti-Semitic attacks, threats and incidents were likely a topic of discussion at many tables. Conversations about Jewish communities around the world focused on a key question: Is there a future for these communities in their home countries, or will they be forced into a modern Exodus?

As two members of Congress dedicated to fighting anti-Semitism, we are deeply concerned by the increase in anti-Semitism around the globe in the last year. Here are just a few of the stories that have been brought to our attention:

Every one of these incidents is one too many, and they are just a small sample of what is happening around the globe.

The United States has consistently been a leader in the fight to combat international anti-Semitism. Since 2004, this work has been led by the U.S. State Department’s Special Envoy to Monitor and Combat Anti-Semitism. The Global Anti-Semitism Review Act of 2004, signed into law that year, created and required the position and its supporting office. Rep. Chris Smith authored those provisions of the law. The position is tasked with tracking and leading U.S. efforts against anti-Semitism around the globe. Just as important, the Special Envoy has served as a critical high-level liaison in the U.S. administration for international Jewish communities.

The Special Envoy position is now more important than ever. Anti-Semitic extremists in the United States and elsewhere are sharing and refining their methods and materials with each other. Terrorist groups like ISIS and al-Qaeda have hard-wired hatred of Jewish people into their ideological DNA, using it as a basis for their attack priorities and propaganda. Anti-Semitic attitudes, rhetoric and incidents have risen on the far left, far right and even the mainstream of the ideological spectrum in many countries.

As you may be aware, the position of Special Envoy to Monitor and Combat Anti-Semitism has remained vacant since the beginning of the administration. Additionally, there has been no staff in the Office to Monitor and Combat Anti-Semitism since May 2017. Throughout 2017, we consistently urged the administration to fill the Special Envoy position as soon as possible, including through directives in the Fiscal Year 2017 and 2018 Omnibus bills. Ranking Member Nita Lowey authored those provisions in those appropriations bills. But even in the light of rising violence and discrimination against the world’s Jewish communities, the position and office are still vacant.

You will have many challenges to tackle should you be confirmed as the U.S. Secretary of State. Nonetheless, we urge you to make it a top priority to quickly appoint a person of recognized distinction in combating anti-Semitism, or in a directly relevant field, to the Special Envoy position. The longer this position remains empty, the more likely the U.S. commitment to combating the modern-day scourge of an ancient evil is called into question. U.S. leadership in the fight against anti-Semitism is essential, even more so now, and we cannot shirk the responsibilities that rest on our shoulders as a world leader.

At the end of a Passover seder, participants often say “Next year in Jerusalem.” But with increasing threats against Jewish communities in Europe, Latin America and elsewhere, let us hope for seders next year in the UK, France, Poland, the Netherlands and the rest of the world. We look forward to working with you to ensure this is a reality.

Trump administration: Combating anti-Semitism a ‘priority,’ but no envoy named