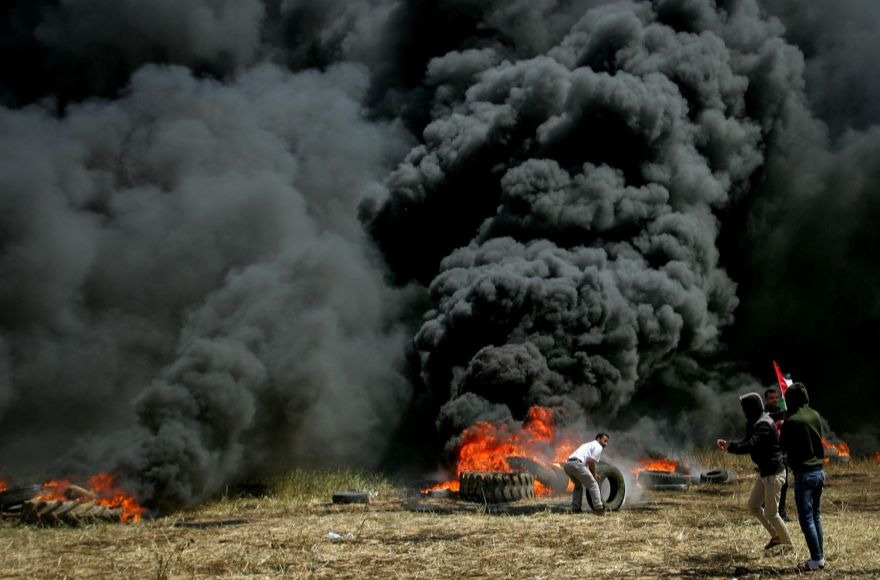 JERUSALEM (JTA) — At least nine Gaza Palestinians were killed, including a journalist and a teen, and over 1,000 wounded in clashes with Israeli troops during a second Friday of protests on the border with Gaza.

Palestinian photojournalist Yasser Murtaja, 31, was shot and killed during the Friday protests, and five other journalists were wounded. Murtaja, who was operating a drone over the heads of Israeli troops, was wearing a vest emblazoned with the word “Press.”

Some 20,000 Palestinians converged on the Gaza border and burned about 10,000 tires to serve as a smokescreen from Israeli troops as part of the so-called March of Return that began a week earlier and is scheduled to last until mid-May, the Israeli army said.

Palestinian also threw rocks and firebombs at Israeli troops on the other side of the border fence, the Israel Defense Forces said. The IDF said that protesters attempted to damage and cross the border fence into Israel, posting videos on Twitter showing such attempts. It also tweeted a photo of a banner planted by protesters at the border that included a Palestinian flag and a flag bearing a swastika.

The IDF said it used live fire in some cases, as well as riot control measures, to stop the protesters from breaching the border fence.

The Israeli Journalists Association on Saturday in a letter to the IDF’s chief of staff, Lt.-Gen. Gadi Eisenkot, called for an investigation into whether the Israeli soldiers targeted journalists and how it will respond to such a finding. The association also inquired about “whether there are IDF guidelines regarding conduct in an environment with dense media coverage and regarding journalists reporting from demonstrations or violent riots.”

Defense Minister Avigdor Liberman on Saturday night indicated that Murtaja had put his life in danger.

“I don’t know who is or isn’t a photographer,” Liberman reportedly said on Saturday. “Anyone who operates drones above IDF soldiers needs to understand he’s putting himself in danger.”

The IDF said it is investigating the incident.

“The IDF does not intentionally fire on journalists,” its Spokesperson’s Unit said in a statement. “The circumstances in which journalists were hit, allegedly by IDF fire, are unknown to us and are being examined.”

Over the past hour, rioters have attempted to damage & cross the security fence under the cover of smoke from their burning tires. They also attempted to carry out terror attacks & hurl of explosive devices & firebombs pic.twitter.com/g8fk9N4vcT