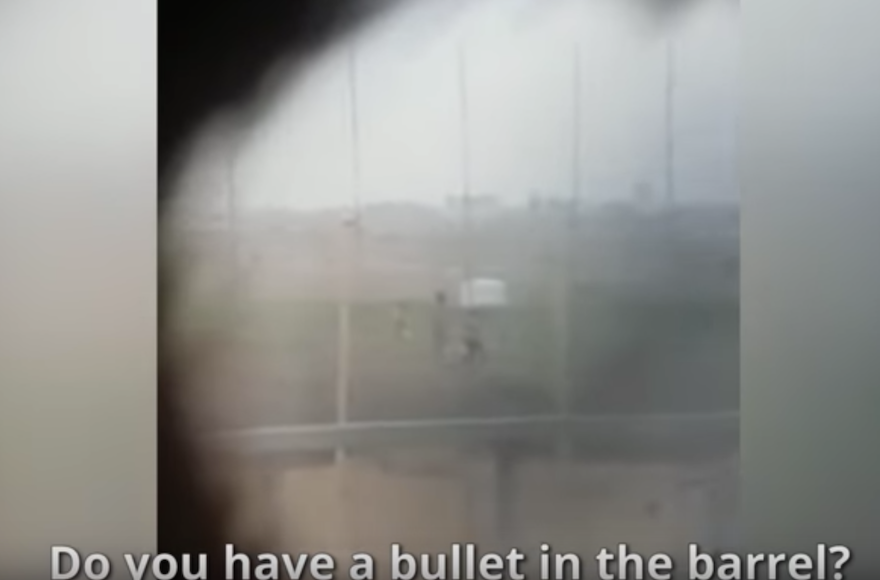 JERUSALEM (JTA) — The Israel Defense Forces has identified and questioned the soldiers heard on a video shared on WhatsApp cheering after a Palestinian man approaching the Gaza border fence was shot by an army sniper.

The video that came to light over the weekend was filmed in December, not during the recent border clashes, Channel 10 reported, citing the IDF. On Monday, the IDF said the incident “will be thoroughly investigated and examined. ”

In the video, which appears to be filmed though a set of binoculars, the soldiers can be heard discussing the shot as the sniper takes aim. The Palestinian man, who was several yards from the border fence and in the video does not appear to be armed, was shot in the head.

Prior to the shot, the sniper’s commander says: “The moment he stops, you drop him. Do you have a bullet in the chamber? Are you [trained] on him?” The shooter replies that there is barbed wire from the security fence blocking his shot. He is then prevented from taking the shot by the presence of a child in the area.

After the man is shot, the person shooting the video is heard saying: “Whoa! What a video! YES! Son of a bitch. What a video! Look they’re running to evacuate him,” he later adds, “What a legendary video.”

Israel’s defense minister, Avigdor Liberman, said Tuesday during an appearance in northern Israel, “The sniper deserves a commendation, the photographer a courtmartial.”

Of the cheering soldiers, he added: “The truth must be clear. The IDF is the most moral army in the world, but when you’re at the front and facing tense situations, sometimes you let out those tensions.”

Israeli lawmakers and officials of all political stripes condemned the soldier’s reactions on the video and expressed satisfaction that the IDF would investigate the incident.

“Anyone who was ever in the field knows that to sit in Tel Aviv or in studios and judge the expressions of IDF soldiers guarding the borders isn’t serious,” Bennett said Tuesday in an interview on Army Radio. “We are starting to judge soldiers based on the quality of their speech and whether it sounds nice or not?”