Alan Dershowitz says meeting with Trump was about Middle East 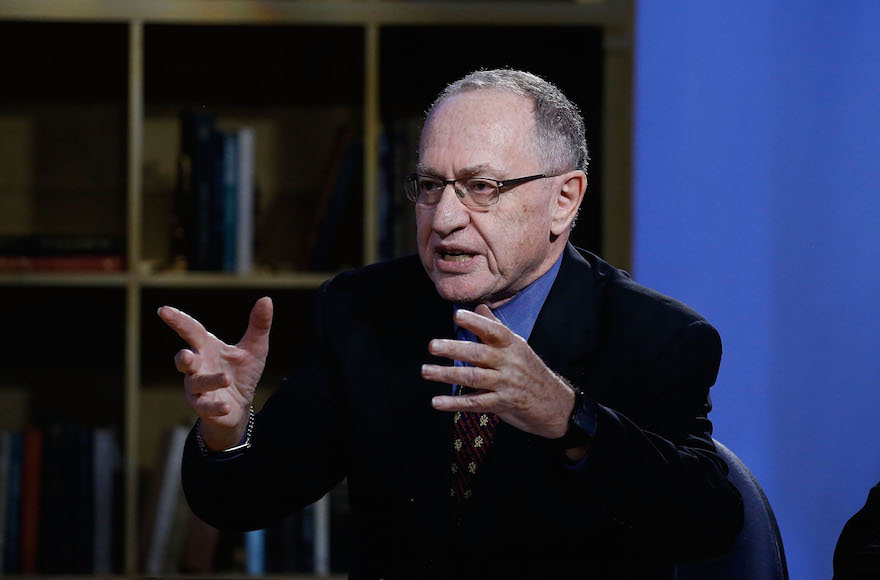 WASHINGTON (JTA) — Alan Dershowitz, the famed constitutional lawyer, met with President Donald Trump, who may soon be mired in a constitutional crisis, and they talked about Israel.

Trump this week lashed out at Robert Mueller, the special prosecutor investigating allegations of corruption and foreign influence in Trump’s campaign and presidency, after federal agents raided the properties of Michael Cohen, a longtime adviser to Trump who is a lawyer. Two women allege Cohen arranged payments to silence them about their affairs with Trump.

Dershowitz has said in multiple television appearances and in interviews that Mueller is overreaching and that the special prosecutor’s position is inherently flawed. He told Slate that he would not offer Trump legal advice in person — but he also would not say if the topic of the Mueller investigation came up.

“All I’m prepared to say on that is that I did not give the president legal advice,” he said. “I don’t give anybody legal advice unless I am their lawyer. I am not his lawyer. I’m not in a lawyer-client relationship with him.”

Instead, Dershowitz said, he prefers to offer counsel in public forums.

“I talk to the president on television all the time,” he said. “Apparently he listens. I get on television and I state what I think is going on. And anybody can listen, and I very purposely do it publicly so nobody mistakes it for legal advice.”

He told Slate it would be a “political mistake” for Trump to fire Mueller or Mueller’s supervisor, Deputy Attorney General Rod Rosenstein.

Trump reportedly is considering firing Rosenstein, and this week White House officials made a point of saying that Trump believes he has the power to fire Mueller. (Some constitutional experts disagree, saying that Trump’s sole recourse would be to fire Rosenstein and then seek to replace him with someone who would be amenable to firing Mueller.)

“I think his much better course is to proceed with the investigation and tell the truth,” Dershowitz said.

On the Middle East, Dershowitz, a major backer of Israel, said Trump seemed optimistic, saying they discussed the threat posed by Iran in the region, the civil war in Syria and the Israeli-Palestinian conflict.

“He seemed upbeat about the Middle East when we talked about it,” he said.

Slate did not press Dershowitz as to why Trump was upbeat.