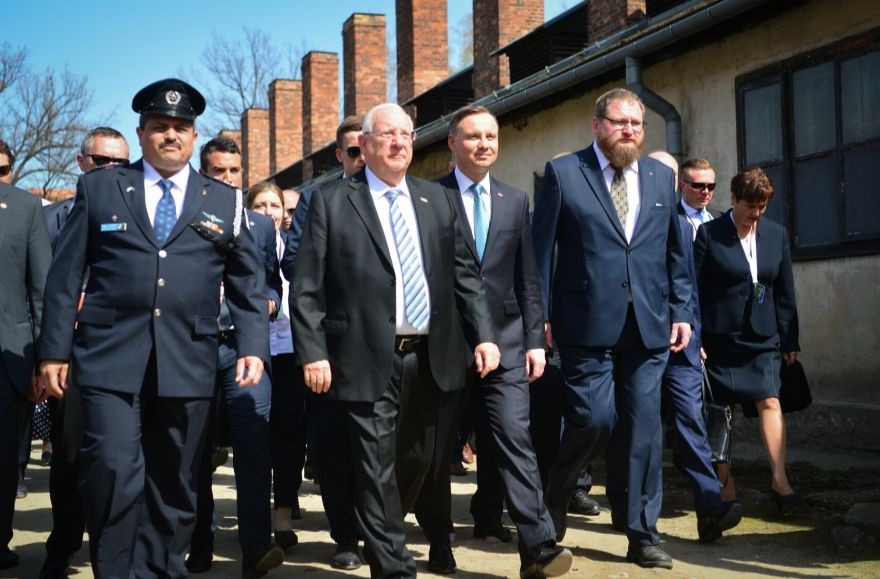 Israeli President Reuven Rivlin and Polish President Andrzej Duda lead the 30th March of the Living on April 12, 2018; Over 12,000 people including Holocaust survivors participated in the two-mile march from the Auschwitz barracks to the Birkenau death camp. (Yossi Zeliger/Flash90)
Advertisement

WARSAW, Poland (JTA) — The presidents of Poland and Israel met in Oświęcim, near the Auschwitz Nazi death camp, where they held talks together and then led the March of the Living.

Polish President Andrzej Duda assured his Israeli counterpart, Reuven Rivlin, on Thursday afternoon prior to the two-mile march from the Auschwitz barracks to the Birkenau death camp that the amendment to the Act on the Institute of National Remembrance, which makes it illegal to suggest that Poles or the country were complicit in Nazi crimes during the Holocaust, is not about blocking the survivors’ accounts. Duda also said he is “not afraid” to talk about difficult elements of the past.

Duda told reporters in an appearance with Rivlin that he is taking part in the March of the Living to give testimony to the memory of the Holocaust and “to say to the world Never Again. To even shout: ‘Look what anti-Semitism, xenophobia, racism can lead to.'”

At the same time, Duda stressed that the law, which aroused much controversy, is not intended to block the testimonies of the survivors, even if they depict Poland in a negative light.

“We wanted to defend the historical truth and I, as the president, want to defend it,” he said. “Also these are elements that are difficult for the Poles. The behavior of people during the war was different. There were also those who have to be condemned. And I’m not afraid to talk about it.”

According to the Polish president, his country can model itself on Israel in building a strong state.

Rivlin noted that Poland was “the cradle of Jewish culture,” and that during the Second World War it became “the largest Jewish graveyard” in the world.

“Israel is following from afar the academic and political debate in Poland on the issue of remembrance and responsibility. We appreciate the internal examination, and for the soul-searching of Polish society,” Rivlin said. “But there is also great disagreement, about which I spoke earlier with the president. Especially because of the special Jewish connection to Poland, we demand that Poland continue to be committed to comprehensive and unrestricted research on the events of the Holocaust period.”

According to the Israeli president, if there is something more important than studying the past, it is “creating a future that largely depends on the education of the future generations.”

Rivlin said that cooperation between Poland and Israel on Holocaust education and research “is the way of passing the candle of memory and responsibility to future generations.”

Both presidents jointly visited a permanent exhibition dedicated to the extermination of Jews, which is located in Block 27 in the former Auschwitz I camp. A permanent exhibition titled “Shoah” was created in 2013. It was prepared by the Yad Vashem Holocaust memorial in Jerusalem on behalf of the State of Israel.

Later, the presidents paid homage to the victims of Auschwitz. In front of the Death Wall, in the courtyard of Block 11, they lit memorial candles.

Some 12,000 marchers, including several elderly Holocaust survivors, participated in the 30th March of the Living.