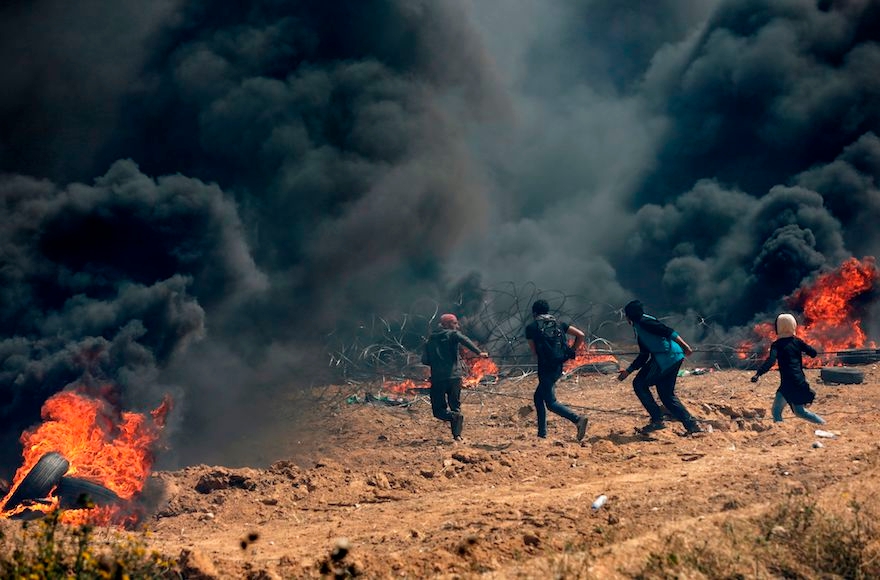 Palestinian protestors pull a metal cable as they try to take down a section of barbed wire at the border fence with Israel, east of Gaza City in the central Gaza Strip, April 13, 2018. (Mahmud Hams/AFP/Getty Images)
Advertisement

(JTA) — Palestinian authorities are reporting that Israeli fire wounded at least 30 protesters, one critically, in the latest round of protests on Israel’s border with the Gaza Strip.

Thousands of protesters amassed at the border for the third Friday in a row.

The Israeli army reported that there were several attempts to breach the border, Israel’s Reshet Bet radio reported, and that protesters threw bottles and in one case an explosive device. The army said its troops were observing legal open fire procedures.

The Palestinians are demanding the right to march to lands in Israel they claim were once owned by their ancestors. Over 20 Palestinians have been killed by Israeli fire over the past two Fridays, stirring condemnation from human rights groups and prompting an Israeli army investigation of the circumstances of the killings.