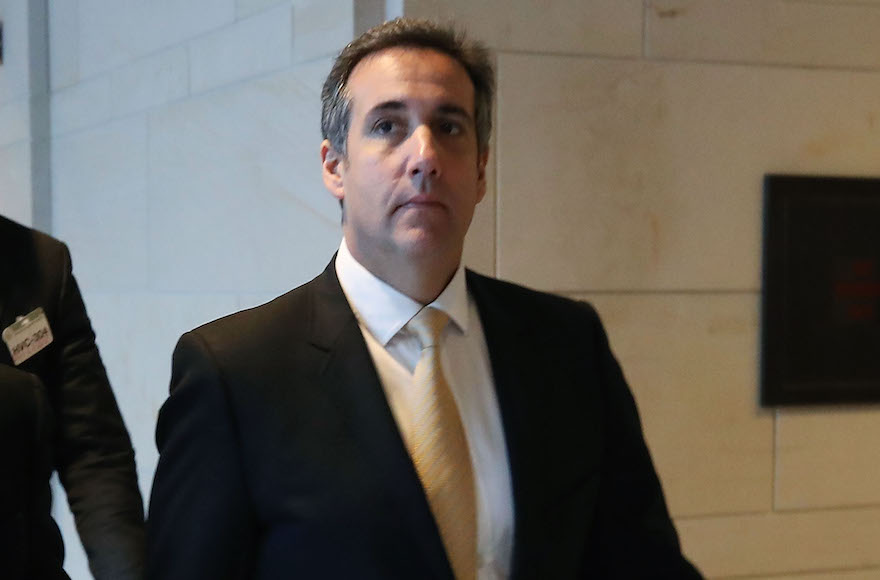 WASHINGTON (JTA) — Michael Cohen, the lawyer under federal scrutiny for his role in paying off a woman who said she had an extramarital affair with Donald Trump, arranged a $1.6 million payment to a Playboy playmate who had an affair with a top Jewish donor to the Trump campaign.

Elliott Broidy confirmed to The Wall Street Journal Friday that Cohen had arranged for the payout to the woman, who said she had been impregnated by Broidy.

“I acknowledge I had a consensual relationship with a Playboy Playmate,” Broidy told the Journal. “At the end of our relationship, this woman shared with me that she was pregnant. She alone decided that she did not want to continue with the pregnancy and I offered to help her financially during this difficult period.” He apologized to his family.

The payout was similar to a $130,000 payout that Cohen organized for Stormy Daniels, an adult film actress who claims to have had sex with Trump, immediately prior to the 2016 presidential election. The woman in the Broidy agreement committed to silence. Additionally, the legal papers used the same pseudonyms that referred to Trump and Daniels in their agreement, “David Dennison” for the man and “Peggy Peterson” for the woman.

Federal agents raided Cohen’s properties earlier this week as part of a probe by a special counsel into irregularities in Trump’s campaign and presidency. Legal experts said that payments to silence Trump’s accusers may be considered improperly unreported campaign donations.

Broidy’s name also came up when it was revealed recently that George Nader, a businessman who serves as an adviser to the de facto ruler of the United Arab Emirates, Crown Prince Mohammed bin Zayed al-Nahya, was cooperating with the special counsel, Robert Mueller, in the investigation into Trump’s campaign and presidency. Broidy allegedly helped broker meetings between Nader and Trump, and also allegedly had a profitable business relationship with the UAE.

Broidy, a former member of the Republican Jewish Coalition board, was an early backer of Trump among GOP Jews, who generally back establishment figures in the party and were wary of Trump’s insurgency.

Broidy and Cohen were deputy finance chairmen of the Republican National Committee. Broidy resigned from that post Friday, and Cohen’s name has disappeared from the RNC website. Steve Wynn, a casino magnate, resigned as its finance chairman earlier this year following allegations of sexual improprieties.