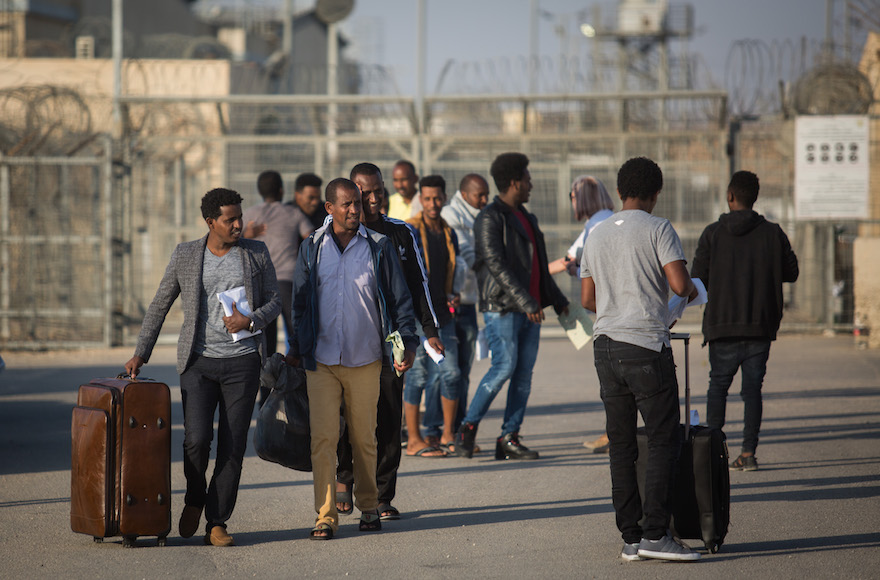 African asylum seekers who had been detained at Saharonim prison in southern Israel shown being released, April 15, 2018. (Hadas Parush/FLASH90)
Advertisement

JERUSALEM (JTA) — More than 200 African migrants in jail in Israel were released by order of the Supreme Court after a deal to deport them to another African country remained unsigned.

Some 207 African migrants and asylum seekers were released over several hours on Sunday from the Saharonim Prison in southern Israel, where they have been held after refusing to leave Israel voluntarily.

The Supreme Court last week ordered them to be released on Sunday – the day that the government was to present its final plan for sending them to another country, in the absence of such a plan, which would require agreement from a third country to take them in. The court also ordered the government’s deportation plan suspended for an additional two weeks, Haaretz reported.

On Thursday Uganda said it was considering a request from Israel to take in 500 African migrants that Israel would deport — the first time an African country confirmed that it was going along with the Israeli government’s controversial deportation plan.

Uganda was one of two countries that had surfaced in reports as a possible destination for some 38,000 African asylum seekers in Israel to be deported under a plan announced in January by the Israeli government. Under the plan, migrants who had chosen to leave by March 31 would receive a payment of $3,500 as well as free airfare and other incentives.

Netanyahu’s plan prompted an outcry from migrant advocates in Israel and a broad swath of the U.S. Jewish organizational community, and at the beginning of the month, Prime Minister Benjamin Netanyahu announced that he would instead seek the orderly departure of half the migrants under U.N. procedures. That, in turn, prompted an outcry from Israeli right-wingers, which led Netanyahu to reverse himself and revert to his plan of deporting the migrants to African countries.

Announcing the reversal, Netanyahu confirmed for the first time reports that one of the destinations Netanyahu had hoped for was Rwanda, but that country had resisted the Israeli government’s overtures.