An employee at the Anne Frank House asked to wear a kippah. He waited 6 months for an answer. 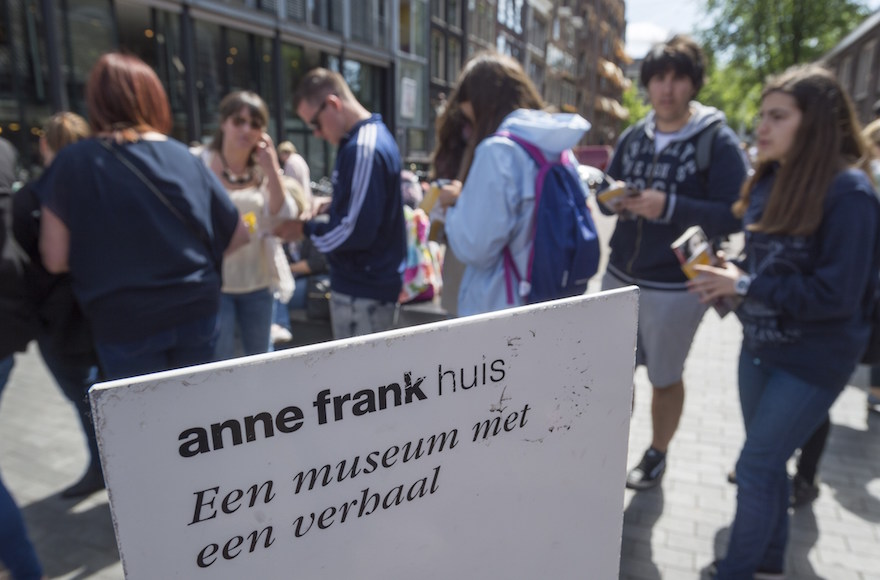 AMSTERDAM (JTA) — When Barry Vingerling asked his employers at the Anne Frank House whether it was okay for him to start coming to work wearing a kippah, he did it mostly as a courtesy.

“I hadn’t expected this to be an issue,” Vingerling, 25, told the Dutch-Jewish NIW weekly in an interview. “I work at the house of Anne Frank, who had to hide because of her identity. Should I have to hide mine in that same house?”

His bosses’ answer to this question appeared to be “yes.” Suggesting at first that he wear a hat on top of his skullcap, they dithered for six months on whether to allow it before Vingerling forced their hand by wearing a kippah without permission.

In a statement, the Anne Frank House said it did not have a policy on the wearing of religious symbols by employees and that it needed a few months to hammer out one. They finally announced last week that they would allow employees to wear religious symbols to work.

Vingerling’s predicament may have had a happy ending. But the fuss nonetheless illustrates how Jews in Western Europe are affected by a debate usually focused on Muslims, immigration and religious tolerance.

In the Netherlands, a 2015 law made it illegal to wear face-covering clothes in schools and hospitals, government buildings and public transportation. Belgium has an even stricter policy since 2011, as does France, aimed at the Muslim niqab, or face veil.

In 2016, local authorities in France banned the wearing of a full-body bathing suit, popularly known as the “burkini,” favored by some devout Muslim women. Those bans divided French society — and its Jewish community – in an acrimonious debate.

Supporters of the ban, including Moshe Sebbag, the head rabbi of the Grand Synagogue of Paris, said the burkini was a “political statement.” But opponents said the ban was a dangerous encroachment on religious liberties that could affect French Jews, as well as Muslims and Christians.

Back in Amsterdam, the kippah issue pitted two key institutions preserving the memory of Anne Frank against each other.

The Anne Frank Fonds in Basel, a foundation set up by Anne Frank’s father, Otto, and which holds the copyright for her diary, criticized the Anne Frank House for its handling of the affair.

“Otto Frank always wanted to establish in the former annex a meeting place for young people from all over the world with their different routes to talk about peace, the future and living together,” Yves Kugelamann, a spokesperson for the Anne Frank Fonds in Basel, told JTA when queried about Vingerling’s case. “This should be respected and acknowledged.”

At the Anne Frank Fonds, Kugelamann added, “everybody is allowed to show his religious, cultural etc. background.” He also said his organization “can’t comment [on] other organizations’ policy,” but religious tolerance is how the Frank family “lived in the open-minded Jewish environment in Frankfurt,” where Anne was born, “and how the children were educated.”

The two groups have clashed before on a number of issues, including on how to balance Anne Frank’s particularist Jewish identity with some of her universal values.

Separately, the Anne Frank Fonds in Basel is also facing criticism for a different reason – its newly announced cooperation with a controversial organization that funds left-leaning and Arab-rights organizations in Israel, in addition to general civil society work.

The Anne Frank Fonds said earlier this month said it would contribute some of its proceeds to the New Israel Fund. The  nonprofit funds groups in Israel like Breaking the Silence, made up of veterans who report what they say are violations of the Israeli army’s own policies, and Adallah, an Israeli-Arab human rights organization that frequently criticizes the government. NIF is also critical of Israel’s plans to deport tens of thousands of African asylum-seekers, leading Prime Minister Benjamin Netanyahu to accuse it of working for the “erasure of the Jewish character of Israel.”

In announcing the partnership, the Anne Frank Fonds wrote that “the New Israel Fund is the leading organization promoting democracy and equality in Israel,” and that “[t]his partnership with NIF is designed to strengthen Israeli civil society.”

Caroline Glick, a right-leaning journalist and Jerusalem Post columnist, criticized the deal in a column for Ma’ariv Friday, stating that NIF “seeks to make Israel a country devoid of singular Jewish characteristics,” whereas Frank herself was both a Dutch patriot and a proud Jew.

“We make sure that money is given in the idea and under the conditions of Anne Frank Fonds (mainly social help, education, women and children rights),” he said. The Basel-based group has “to approve [each recipient] organization. The New Israel Fund proposes projects, [then] we decide” together, he told JTA.