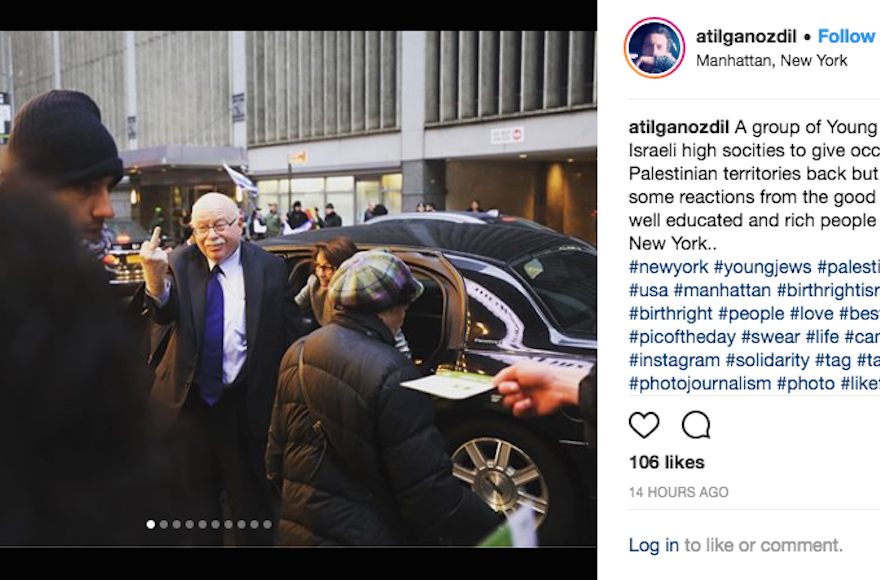 (JTA) — Michael Steinhardt, the co-founder and major funder of Birthright Israel, flashed his middle finger at protesters outside a gala dinner in honor of the 18th anniversary of the free trip to Israel for young Jewish men and women.

More than 150 students from colleges in the New York and New England areas protested in front of the Ziegfeld Ballroom in New York, where the annual gala was held on Sunday evening. The students represented groups including Jewish Voice for Peace, Students for Justice in Palestine, the Palestine Solidarity Alliance and the Democratic Socialists of America, all of which support the Boycott, Divestment and Sanctions movement against Israel.

The protest was led by Return the Birthright, a campaign supported by Jewish Voice for Peace and Independent Jewish Voices. It calls on young Jews to boycott Birthright and to support the right of Palestinian refugees to return to their homes in Israel. During the event, the anti-occupation group IfNotNow, which does not take a stance on the BDS movement, projected on the ballroom building an image with the words “Birthright Lied To Us,” and “Jewish Youth Demand the Truth.” 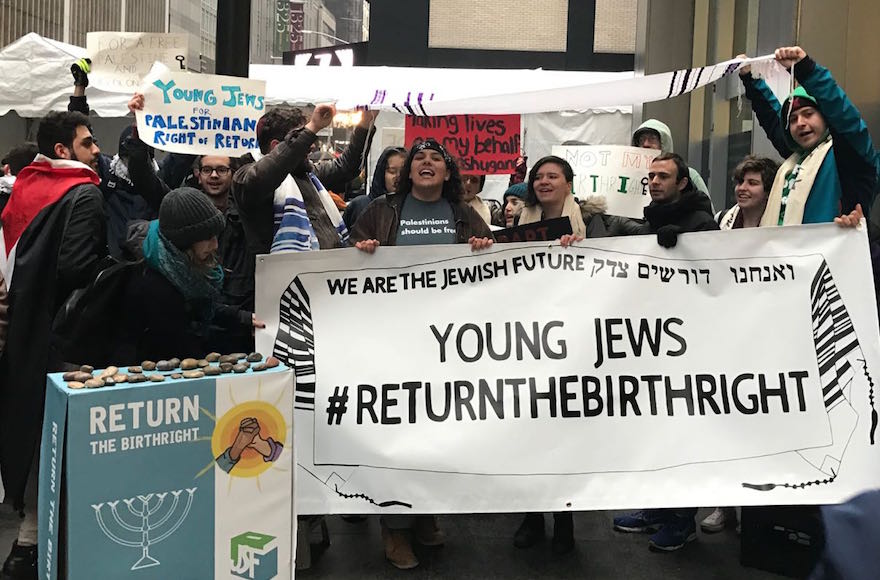 Students protesting outside of the Ziegfeld Ballroom in New York City, April 15, 2018. (Courtesy of Jewish Voice for Peace)

A quote attributed to the evening’s honoree, billionaire philanthropist Sheldon Adelson — “Israel Isn’t Going to Be a Democratic State – So What” — also was projected on the wall.

Adelson, a major Birthright funder, was presented with the “Guardian of the Jewish Future” award at the event.

The student protesters wrapped themselves in personalized Jewish prayer shawls and demonstrated by returning symbolic Birthright plane tickets. They also read out the names of Palestinian villages destroyed 70 years ago, and the names of the 32 protesters in Gaza killed in the past three weeks during the Great Return March protests.

A photo of Steinhardt and protesters was posted on Instagram by a photographer for Turkey’s state-run Anadolu Agency.