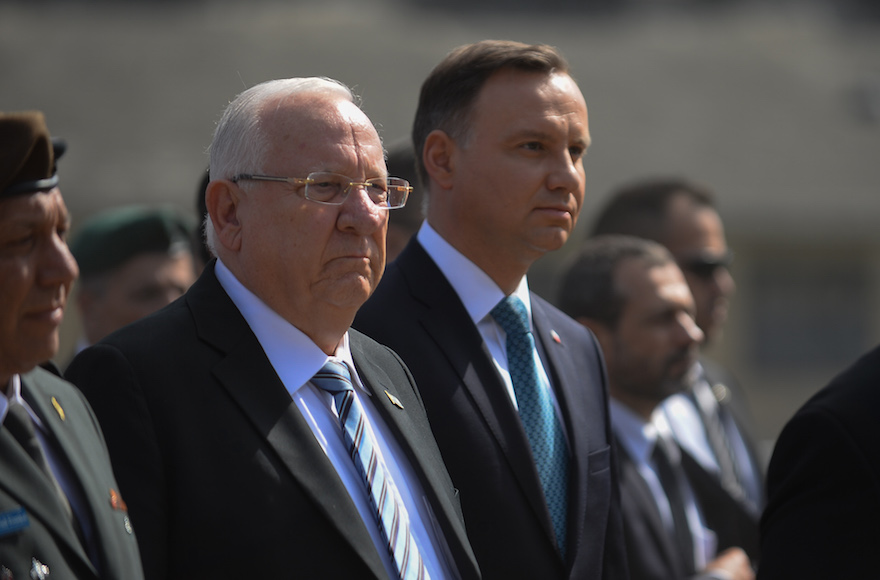 (JTA) — A far-right Polish nationalist group has filed a complaint with the country’s High Court accusing Israeli President Reuven Rivlin of violating a law that makes it illegal to suggest that Poles or the country were complicit in Nazi crimes during the Holocaust.

The National Movement is accusing Rivlin of breaking the law during his visit to Poland earlier this month to lead the March of the Living at the Auschwitz death camp.

Krzysztof Bosak, vice president of the National Movement, told The Associated Press that his group is testing the law, which was passed in February but is not being enforced in practice.

Rivlin spoke at a news conference with Polish President Andrzej Duda prior to the two men leading the two-mile march from the Auschwitz barracks to the Birkenau death camp.

“There is no doubt that there were many Poles who fought the Nazi regime, but we cannot deny that Poland and Poles had a hand in the extermination,” he said. “The country of Poland allowed the implementation of the horrific genocidal ideology of Hitler, and witnessed the wave of anti-Semitism sparked by the law you passed now.”

Duda told Rivlin prior to the march that the new law is not about blocking the survivors’ accounts. Duda also said he is “not afraid” to talk about difficult elements of the past.

The passage of the law has created tension and disagreement between Poland and Israel. The law is under review in Constitutional Court before it can take effect. Poland’s attorney general said in a nonbinding opinion that the court should shelve the parts of the law that have drawn criticism.

Israeli government officials, including Prime Minister Benjamin Netanyahu, and others have harshly criticized the law because, they claim, while it ostensibly targets those who say Poles collectively were responsible for the Holocaust, it could also be interpreted as criminalizing any reporting of Polish anti-Semitism during the period around the Holocaust, and any reporting of Poles who collaborated with Nazis.