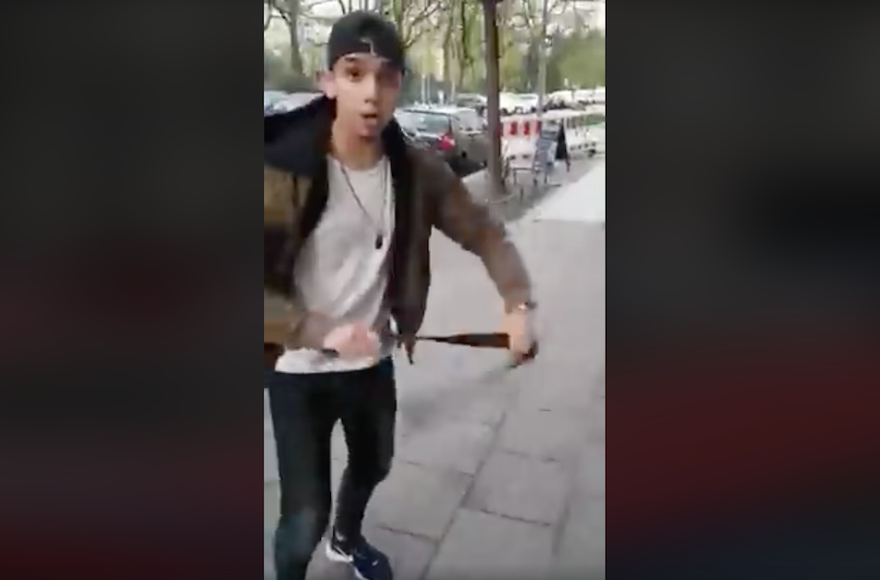 A shot of
Advertisement

BERLIN (JTA) – A 21-year-old man wearing a kippah who apparently is not Jewish was assaulted on a Berlin street by an Arabic-speaking man in an apparent anti-Semitic attatack.

Police are investigating the Tuesday evening incident in which the assailant lashed the man with his belt and repeated the Arabic word for Jew, “Yahudi.” The victim — an Israeli from Haifa, according to the German media — filmed the attack on his cellphone. He was accompanied by a 24-year-old man also wearing a kippah who reported being accosted verbally by three men.

According to a source who spoke with the two men privately, neither is Jewish. One had brought the kippot from Israel, and they had just put them on when the incident occurred. The one who was attacked physically comes from an Israeli family with Christian and Arab members but is not religious.

“He can be whoever he wants, but it’s his decision to put on a kippah … and nobody deserves to be beaten up just because he looks Jewish,” Berlin Jewish Community Council member Sergey Lagodinsky told JTA. Lagodinsky and another council member, Mike Samuel Delberg, met with the young men on Wednesday to discuss the incident.

Also Wednesday, a Berlin-based center on anti-Semitism released a report showing a 60 percent increase in anti-Semitic incidents in 2017 over the previous year. According to the Research and Information Center on Antisemitism, or RIAS, 947 incidents were reported last year, compared to 590 incidents in 2016.

“People in Berlin are confronted with anti-Semitism on a daily basis,” project director Benjamin Steinitz said in a statement accompanying the report. “On average, we learn of three to four incidents daily. Anti-Semitism is a problem for the entire society. It marks the lives of those affected, and we must not leave them to deal with it alone.”

In the Tuesday night attack, after the belt came out, one of the attacker’s companions intervened and the three began to move away.

Police told the BZ online newspaper that the victims followed their attackers, one of whom by then had picked up a bottle. A 24-year-old woman intervened to keep the groups apart and the three attackers fled on foot.

The incident took place on a warm evening in the trendy Prenzlauer Berg neighborhood, which is popular among many Israelis living in Berlin. It is also home to an Orthodox Jewish community centered around the Lauder Yeshivas Beis Zion and the synagogue Kahal Adass Jisroel Berlin.

The cellphone video has coursed through social media after it was shared by the Berlin-based Jewish Forum for Democracy and Against Antisemitism.