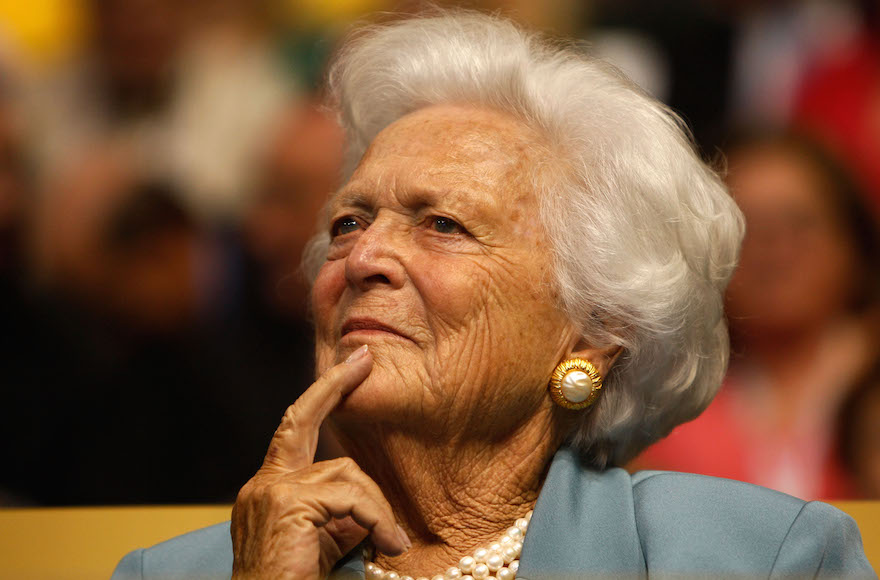 (JTA) – Barbara Bush “was the gold standard for what it means to be First Lady,” the Republican Jewish Coalition said following her passing Tuesday night in Houston.

The wife of the 41st president, George H.W. Bush, as well as the mother of the 43rd, George W. Bush, died at her home with her husband by her side. She was 92 and had been battling COPD, a lung disease, and congestive heart failure, according to reports.

Barbara Bush was known for her large fake pearl chokers and grandmotherly appearance, and her no-nonsense attitude. As first lady from January 1989 to January 1993, Bush reportedly often polled as more popular than her husband.

“Barbara Bush was an extraordinary woman,” Norm Coleman, national chairman of the Republican Jewish Coalition and a former U.S. senator from Minnesota, said in a statement. “She dedicated her life to public service, and worked tirelessly to help sick children and people in need. She inspired millions and helped countless others. She will be deeply missed, but her legacy of charity will live on. May her memory be a blessing.”

On Monday, a Bush spokesperson announced that the former first lady had made a decision to halt medical treatment and receive comfort care in her home. She also suffered from Graves’ disease, an autoimmune disorder that causes an overactive thyroid gland.

George H.W. Bush held his wife’s hand all day Tuesday and was with her when she died, according to Jean Becker, chief of staff at George H.W. Bush’s office in Houston. The couple had been married for 73 years after meeting as teenagers at a school dance.

Barbara Bush championed family literacy during her time in the White House, focusing on bringing awareness to early childhood education and adult literacy for parents. She launched the Barbara Bush Foundation for Family Literacy.

A defining moment of her tenure as first lady was her visit to a residence for HIV-infected babies at a time when Americans were terrified by the AIDS virus, a disease that was not well understood by the public. Bush cuddled and kissed the babies with television cameras capturing the visit.

“You can hug and pick up AIDS babies and people who have the HIV virus” without hurting yourself, she said. “There is a need for compassion.”

A statement issued by the White House said that “President Donald J. Trump and First Lady Melania Trump join the Nation in celebrating the life of Barbara Bush. As a wife, mother, grandmother, military spouse, and former First Lady, Mrs. Bush was an advocate of the American family. Amongst her greatest achievements was recognizing the importance of literacy as a fundamental family value that requires nurturing and protection. She will be long remembered for her strong devotion to country and family, both of which she served unfailingly well. The President and First Lady’s thoughts and prayers are with the family and friends of Mrs. Bush.”

Bush also is being remembered as having a sharp tongue, especially if she felt a family member was under attack. One incident being recalled in the wake of her death came when her husband was running for re-election as vice president, against Geraldine Ferraro, the first woman running in a spot on a major party’s ticket.

Her funeral, which is invitation only, will be held Saturday in Houston.

She is survived by five children and their spouses, 17 grandchildren and seven great-grandchildren. She was predeceased by a daughter, and will be buried next to her on the grounds of the George Bush Presidential Library in College Station, Texas.