Israel at 70: Parties across the country, greetings from Netanyahu and Trump 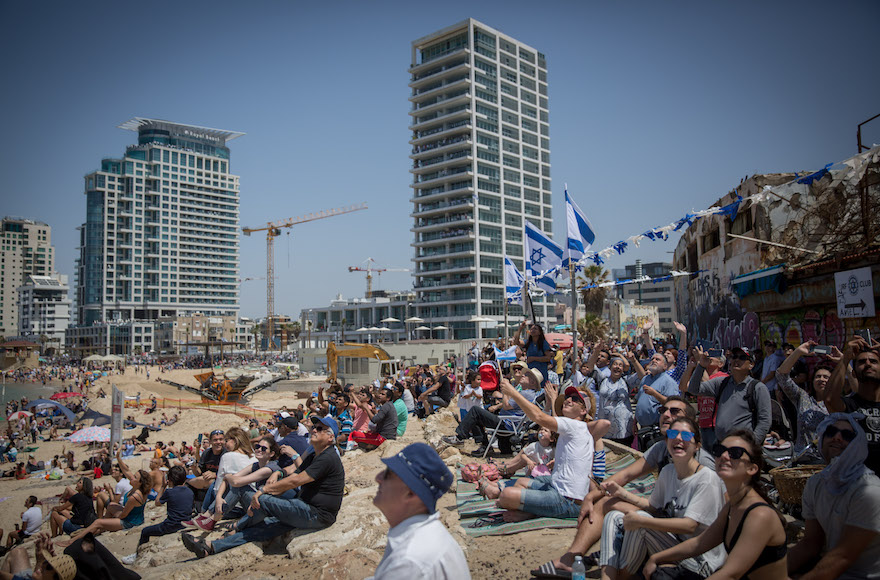 (JTA) — Israelis celebrated the 70th anniversary of their country’s establishment with parties and day trips, as their leaders sent messages marking the anniversary.

Some 200,000 Israelis visited national parks on Thursday, the holiday marking the Hebrew calendar anniversary of the signing of the Israeli Declaration of Independence on May 14, 1948. Israeli also celebrated in traditional fashion with barbecues, fireworks and folk dancing. A group of Israeli fighter jets also conducted its annual flyover across the country.

Israel also hosted the annual International Bible Quiz, an oral test of high-school students’ biblical knowledge. The government also awarded its yearly Israel Prizes, which honor the achievements of notable Israelis in a variety of fields.

Speaking at the annual torch-lighting that ushered in the holiday on Wednesday night, Prime Minister Benjamin Netanyahu celebrated the return of Jews to their biblical homeland, expressed hope for the future and sent a combative message to Israel’s enemies.

“In another 70 years, you’ll find here a country that is many times stronger because what we’ve done until today is just the beginning,” he said, according to The Times of Israel. “We don’t hesitate to confront those who want to eradicate us because we know that defending ourselves with our own force is the essence of independence.”

In his message, President Reuven Rivlin expressed gratitude for living in an era of Jewish statehood.

“Today we welcome and are thankful for the good,” he said. “And our eye, a good omen, looks to the future and to the great challenges it will bring.”

President Donald Trump also tweeted a message in honor of the holiday.

“Best wishes to Prime Minister @Netanyahu and all of the people of Israel on the 70th Anniversary of your Great Independence,” the tweet said. “We have no better friends anywhere. Looking forward to moving our Embassy to Jerusalem next month!”