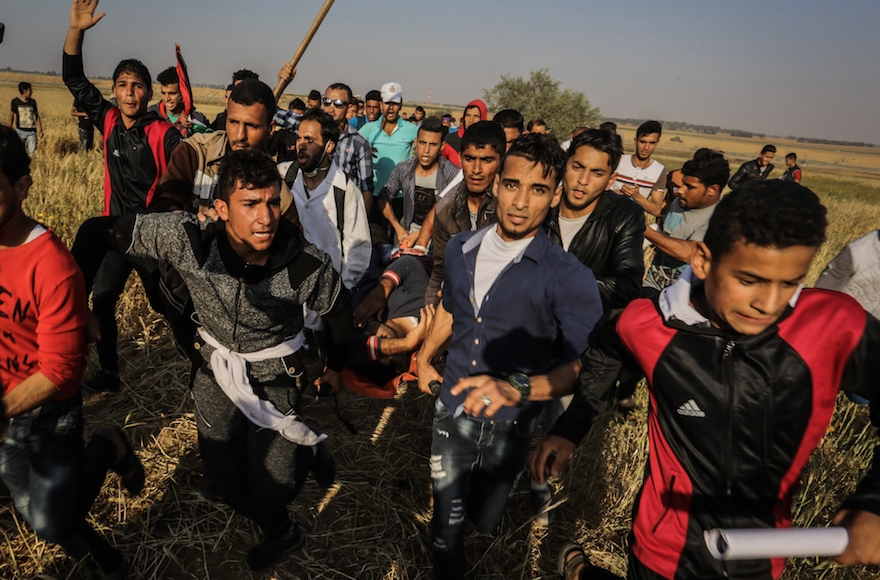 Palestinians carrying a wounded Palestinian man at the Israel-Gaza border, during a protest in the southern Gaza Strip, April 15, 2018. (Abed Rahim Khatib/Flash90)
Advertisement

(JTA) — Two Palestinians have been reported killed by Israeli troops in the Gaza Strip during riots near the border with Israel.

Some 3,000 people participated in the protests Friday, according to Ynet, significantly fewer than when the protests started several weeks ago.

A 25-year-old Palestinian man was shot dead in the northern Gaza Strip and a 24-year-old also was killed.

Dozens of Palestinians have been killed in riots around the fence, which preceded a call by Hamas officials for protesters against Israel to reach the barrier. The protests in the so-called return campaign are calling for the return of Palestinian land.

The number of terrorist attacks on Israelis dropped in March to 136 incidents from 149 the previous month, the Israel Security Agency said in its monthly report on March. Three people were killed and nine were injured.