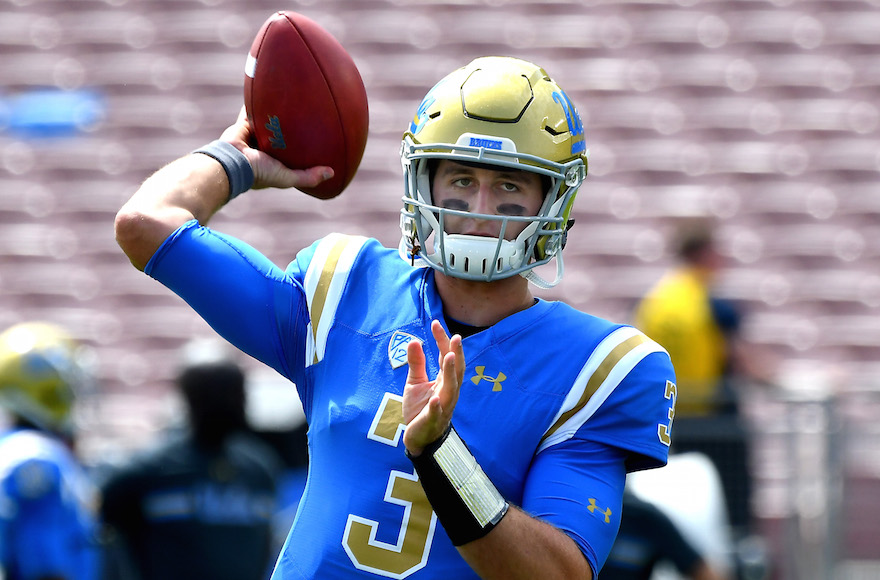 (JTA) — For most of last year, many predicted that UCLA quarterback Josh Rosen would be the first player chosen in the 2018 National Football League draft.

The sturdy 6-foot-4 signal-caller has racked up an impressive array of passing statistics since his freshman year in 2015, and analysts have praised the right-hander’s throwing mechanics, accuracy and poise in the pocket. The Cleveland Browns, the beleaguered franchise that holds the No. 1 pick this year, badly need a quarterback. The Jewish kid from Manhattan Beach, California, who had a bar mitzvah and is just now barely old enough to legally drink alcohol, was set to make Jewish sports history at Thursday’s draft.

But over the past few months, Rosen’s stock has begun to drop. In February, Todd McShay, a leading NFL draft analyst, predicted that the New York Giants would select him with the second pick. On Monday, prominent Sports Illustrated writer Peter King wrote that he “can’t find a likely spot” for Rosen in the top six picks. On Wednesday, it was reported that the New England Patriots are interested in Rosen — and they have the 23rd overall pick (although they could trade with another team to get a higher slot).

The reason for the slide? Apparently it has nothing to do with Rosen’s physical health or ability to sling a football, but rather involves who he is and what he has said off the field. And for at least one prominent sports TV personality, the conversation about Rosen has dipped into anti-Semitism.

Some background: He’s a talker

Rosen has not just made headlines with his grid skills. He has criticized the college football system, arguing that the high level of play required by the sport and schoolwork don’t mesh. In the same vein, he sarcastically blasted UCLA for signing a $280 million apparel deal with Under Armour while college athletes are unpaid. He once wore a hat on the golf course that read “F*** Trump.” He snuck a hot tub into his dorm room.

This tendency to speak his mind — what the scouts call “intangibles” — put him at odds with UCLA coach Jim Mora throughout Rosen’s tenure with the Bruins. Mora said Rosen reminded him of Johnny Manziel, a former college star whose once promising NFL career was derailed by unorthodox behavior, substance abuse issues and multiple arrests.

Rosen has also been open about his ambitions for a post-NFL career, something that scouts and others in the industry have taken to mean that he isn’t focused enough on football. He told Bleacher Report in August that he wants to get an MBA, create a business and “own the world.” The Sporting News reported in January that some believed Rosen was only interested in football to “make money and support the lifestyle he wants.” 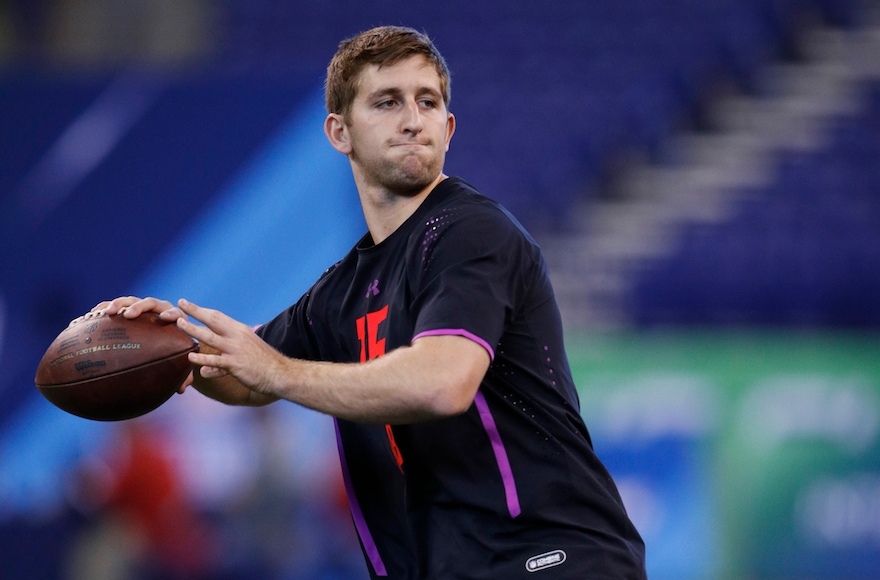 After the waves of criticism poured in about Rosen’s off-the-field opinions, analysts were left wondering how teams would evaluate him and where exactly he could be selected in the draft. Some chose to dig into other factors that might offer clues, such as his identity and background.

“According to my source, he’d rather be in New York [on the Giants]. He’s Jewish, there’s a stronger Jewish community, he’d rather be in the New York market than the Cleveland market, blah blah blah, we don’t know,” Stephen A. Smith, a prominent ESPN commentator, said on a radio show a couple of weeks ago.

Rosen has hinted at this kind of Jewish preference before. He was born and raised in a tony area of Southern California, the son of Charles Rosen, an orthopedic surgeon who was once on President Barack Obama’s shortlist to become surgeon general, and Liz Lippincott, a journalist and the great-granddaughter of the founder of the University of Pennsylvania’s prestigious Wharton School of Business. In 2016, he told Sports Illustrated that Los Angeles’ large Jewish community was a factor that brought him to UCLA, even though he had wanted to attend Stanford — he was rejected by the Northern California school despite his stellar grades and standout athletic ability.

“In retrospect, being Jewish is a big reason why I should have considered UCLA,” he said. “Just because of how Jewish Hollywood is, and they really want someone to look up to because they just don’t have professional athletes.”

Another ESPN radio show, hosted by sports writers Jorge Sedano and LZ Granderson and former NFL player Keyshawn Johnson, picked up where Smith left off. But their analysis brought up Rosen’s wealthy parents, and it became a little strange.

“First thing you say: doctor, Manhattan Beach … the first thing you think, at least I think: pretty affluent neighborhood, little bit of money,” Johnson said. “They could be broke as a bag of glass, I don’t know, but certainly doesn’t seem that way.

“When you talk about his religion, I believe Josh is Jewish, [OK]?” he continued. “New York — big Jewish community … much like L.A. You factor that into the equation.”

Granderson posited that Rosen might even play better if he were drafted by New York or a team in a city with a big Jewish population, and Johnson agreed.

“If he is an observing Jewish individual who is embraced by the local community, that will certainly raise his ball,” Granderson said.

The development in this story that seems to have hit Rosen’s draft hopes the hardest came earlier this month, when Mora questioned whether he is “fit” for the NFL. After praising his skill and intelligence on the field, the veteran coach told Sports Illustrated’s King that Rosen lacks a “blue-collar, gritty attitude.”

“He needs to be challenged intellectually, so he doesn’t get bored. He’s a millennial,” Mora said.

For Tony Kornheiser — the sports writer and TV personality who stars on ESPN’s “Pardon the Interruption” — this was the last straw.

Kornheiser, who is Jewish, and his co-hosts also likened the NFL’s fear of Rosen to its past prejudice against black quarterbacks, who on the flip side have been labeled as not smart enough to succeed at the demanding position.

Of course, Rosen’s fellow quarterbacks in the draft pool, such as Baker Mayfield, Josh Allen and Sam Darnold, are also all millennials. It’s also worth noting that Mayfield, the Heisman Trophy winner from the University of Oklahoma, was arrested last year for being publicly intoxicated. But his personality hasn’t made as many headlines as Rosen’s leading up to the draft.

“When Jim Mora said Josh Rosen is really smart and needs to be challenged every day or he’ll get bored, that improved his draft stock in my book,” he wrote. “Give me a player who wants to be challenged and doesn’t get overwhelmed with basic XOs. I like this kid more and more.”

When Jim Mora said Josh Rosen is really smart and needs to be challenged every day or he’ll get bored, that improved his draft stock in my book.
Give me a player who wants to be challenged and doesn’t get overwhelmed with basic XOs.
I like this kid more and more. @josh3rosen