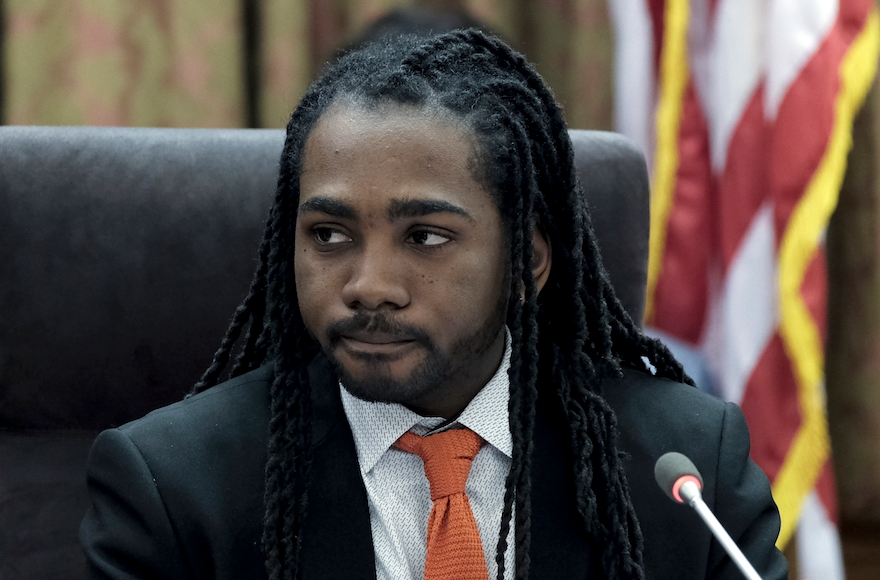 WASHINGTON (JTA) — The Washington, D.C., councilman who suggested on Facebook that rich Jews control the weather visited the U.S. Holocaust Memorial Museum and left halfway through the 90-minute tour.

Trayon White Sr. did not say goodbye to his hosts, the Washington Post reported. Rabbi Batya Glazer of the Jewish Community Relations Council of Greater Washington, who accompanied White on Wednesday’s tour, texted him to ask his whereabouts. White wrote back that he hoped to see her outside the museum but he had to leave soon for an event in the 8th Ward, which he represents.

White was standing alone on the sidewalk outside the museum by the time the tour was over. Glazer said she found his behavior “confusing.”

White, a Democrat, posted a video early on March 16 in which he accused “the Rothschilds” of controlling the climate to make money — an anti-Semitic conspiracy theory that has gained traction on the web. He later removed the video and issued an apology.

Lynn Williams, an expert on educational programs at the museum, guided White through the institution’s exhibitions, according to the Washington Post.

“There’s nothing more powerful than visiting the Holocaust museum for understanding the culture of the Jewish community, and our concerns about anti-Semitism,” Glazer told a reporter who shadowed the tour. Her JCRC has been heavily involved in the first-term lawmaker’s public rehabilitation following his dissemination of the video.

During the visit, White reportedly was confused by a picture of a woman surrounded by Nazis while wearing a sign that reads “I am a German girl and allowed myself to be defiled by a Jew.” He asked Williams twice whether the Nazis were protecting her before the guide explained they were trying to humiliate her.

White last month attended a Passover seder dinner at the home of another Council of the District of Columbia member, Elissa Silverman.

Among the local Jewish officials who had spoken with White after the initial controversy was Rabbi Levi Shemtov, the executive vice president of the American Friends of Lubavitch (Chabad).

“Everyone deserves a second chance, and I think that our community proved itself more than willing to give him that, but a third and fourth chance might be a little more difficult,” Shemtov told JTA in an interview. “I think the councilman is going to have to make some choices about educating himself more about the issue before expressing himself again.”