Natalie Portman explains why she won’t accept prize in Israel: It’s about Netanyahu 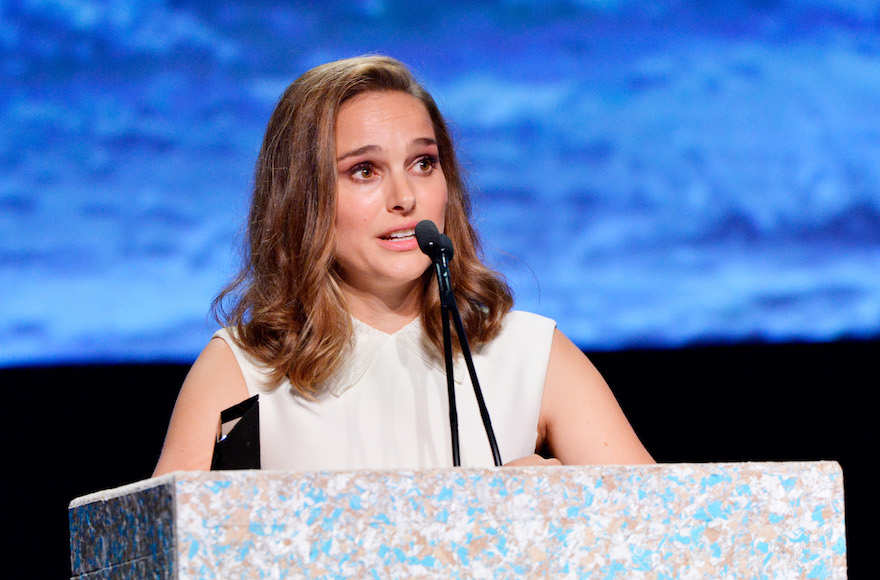 (JTA) — Natalie Portman said she wouldn’t attend a prize ceremony in Israel because of her feelings about its prime minister, Benjamin Netanyahu, and “atrocities” committed on his watch, but emphasized that she would not shun Israel itself.

The Jerusalem-born director and actor, posting Friday night on Instagram, explained her decision not to accept in person the $2 million Genesis Prize, which calls itself the “Jewish Nobel,” after a day of speculation in the media that she was turning down the prize because she was joining the movement to boycott, divest from and sanction Israel. The prize foundation had the day before announced Portman’s decision not to attend the ceremony.

“I chose not to attend because I did not want to appear as endorsing Benjamin Netanyahu, who was to be giving a speech at the ceremony,” said Portman, who in 2011 won a best actress Oscar.

“By the same token, I am not part of the BDS movement and do not endorse it,” Portman said.

“Like many Israelis and Jews around the world, I can be critical of the leadership in Israel without wanting to boycott the entire nation,” she said. “I treasure my Israeli friends and family, Israeli food, books, art, cinema, and dance. Israel was created exactly 70 years ago as a haven for refugees from the Holocaust. But the mistreatment of those suffering from today’s atrocities is simply not in line with my Jewish values. Because I care about Israel, I must stand up against violence, corruption, inequality, and abuse of power.”

She did not explain what she was referring to by “atrocities.” Israel has drawn sharp criticism in recent months for confrontations with Palestinian protesters on its Gaza border. Israeli troops have killed over 30 Palestinians and wounded hundreds. Israel says the protesters are not peaceful and have tossed rocks and explosive devices at troops.

Netanyahu last month also drew sharp rebukes for reversing his decision to work with the United Nations to resettle some 38,000 African asylum seekers in the country, and reverting to an earlier plan to summarily deport them to Uganda or another African nation. Among the critics were Jewish groups and figures who rarely criticize Israeli government policies.

In the wake of Portman’s decision, the Genesis Prize Foundation said it would distribute the $2 million to women’s rights groups, but not those of Portman’s choosing. Winners of the prize, which “honors individuals who serve as an inspiration to the next generation of Jews through their outstanding professional achievement along with their commitment to Jewish values and the Jewish people,” conventionally donate the prize money to charitable causes of their choosing.

The Genesis Prize on Friday posted a tweet on its timeline attached to a story about the controversy, with the headline, “Israelis lament Natalie Portman dropping out of Genesis Prize.”

The background to the Genesis Prize’s Twitter page was still as of Friday evening a photo of Natalie Portman, accompanied by a message congratulating her.

“This experience has inspired me to support a number of charities in Israel,” she said. “I will be announcing them soon, and I hope others will join me in supporting the great work they are doing.”

Portman has previously joined efforts to support Israel. In 2015, she directed and starred in “A Tale of Love and Darkness,” a Hebrew-language film adaptation of the Amos Oz book of the same name that chronicles the author’s life surrounding Israel’s founding.