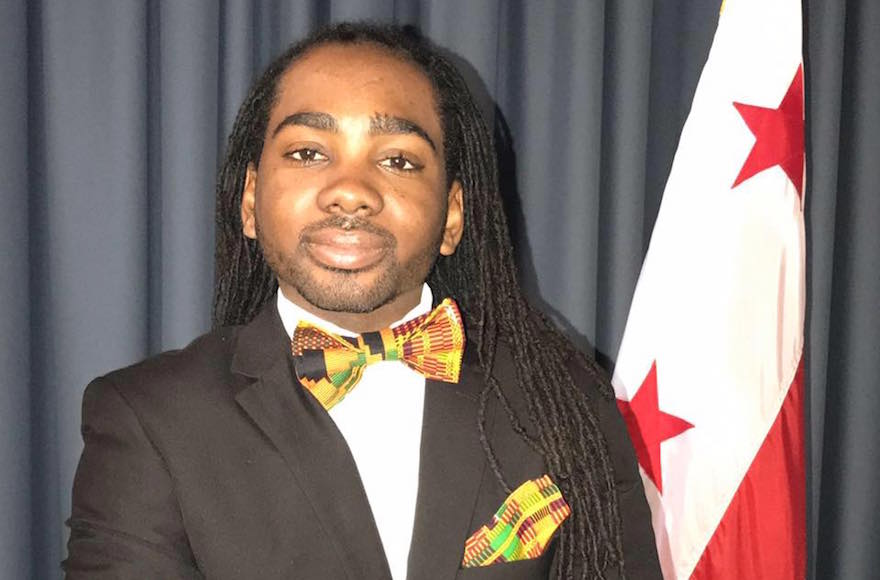 (JTA) — Washington, D.C., councilman Trayon White, Sr. said a $500 donation to the Nation of Islam was meant to show his appreciation for local black men who have helped him to reach and help local youth.

White, already under fire for saying on Facebook that rich Jews control the weather and for leaving an organized tour of the U.S. Holocaust museum, said he donated $500 to the Nation of Islam’s Saviours’ Day gathering in Chicago from his constituent services fund because two local members asked him to.

He had initially said he did not know about the donation, though his treasurer told the Washington Post, which first reported the donation, that the councilman had ordered him to cut the check. The constituent services funds is made up of private money raised by lawmakers to help the residents of their districts.

At the convention, Farrakhan made anti-Semitic comments, including calling “powerful Jews” his enemy and blaming Jews in Hollywood for the existence of transgender people.

White made a Facebook Live video on Saturday to defend himself against the fallout from recent events. “I’m under constant attack,” White said at the beginning of the 35-minute video.

He addressed the Rothschilds controlling the weather incident by saying that he did not know that it was an anti-Semitic canard. “This has definitely been a learning experience,” he said.

“But I said my apologies and I am done with that,” he continued. He said his apology “was sincere, I never wanted to offend anybody.”

White asserted that he did not leave a tour for him and his staff of the U.S. Holocaust museum early, but rather went ahead with a staff member for part of the time because “a reporter was following me.”

“I saw a lot of correlations between what the Jews went through and what the Africans went through,” said White, who added that he once toured the museum when he was in high school. He added, however, “our people are still suffering every day. We are struggling financially … we are struggling for health issues.”

“When they called and asked me to support them I said ‘yeah support them,’” he said. “Do I agree with everything Farrakhan says, no? … But what are some of the things we can work on together?

White said he has gotten support from the Jewish community and singled out the progressive organization Jews United for Justice. The group on Friday issued a statement calling on White to request a refund for the donation to the Nation of Islam.

White asserted several time that he will continue to serve his constituents. “I’m not going anywhere, I’m not resigning,” he said.

D.C. Councilmember Brianne Nadeau, who is Jewish, in a statement called the revelation of White’s donation “appalling.”

“With today’s revelations, I believe we have crossed a threshold. I believe the Council should censure Councilmember T. White for his misuse of funds in support of Anti-Semitism and homophobia,” she said.

The Jewish Community Council of Greater Washington and the American Jewish Committee of Washington, D.C. said in a statement that they condemned Whites “reprehensible actions” in the “strongest possible terms.”

“In light of the Post’s revelations and the councilmember’s conduct at the Holocaust Museum, our patience and understanding are running out. Councilmember White must clearly and unequivocally repudiate anti-Semitism, Louis Farrakhan and the Nation of Islam’s hateful creed, and dramatically change his behavior. Time will tell if he can move forward from these incidents or if these events will indelibly undermine his ability to lead,” the statement said.