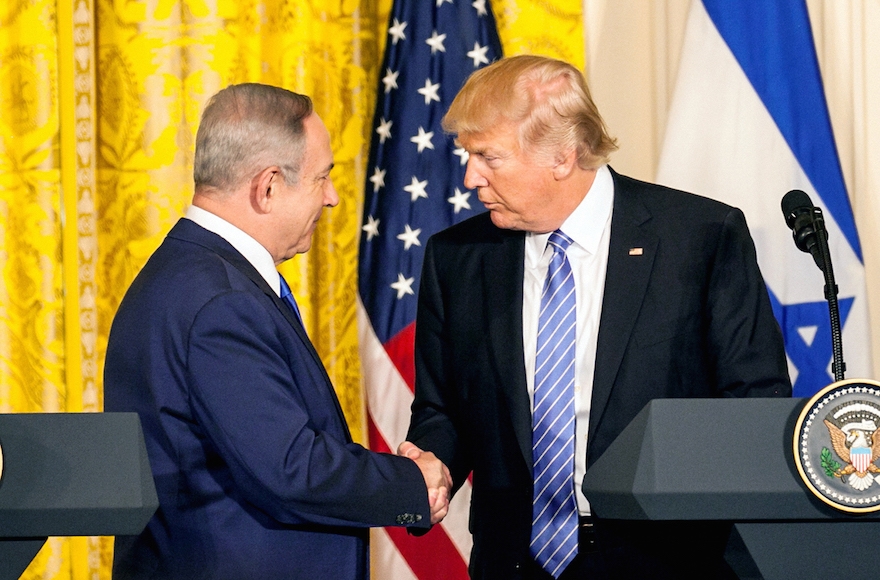 (JTA) — In a phone call last year with Israeli Prime Minister Benjamin Netanyahu, President Donald Trump asked him whether or not he genuinely wants peace, according to a new report.

Trump asked the question in the wake of news reports that Netanyahu had planned to build new settlement housing to placate members of his coalition government, Axios reported Sunday, citing three sources familiar with the call. The news website did not report on Netanyahu’s answer.

The question came in the middle of a longer conversation that was “mostly friendly and complimentary,” according to Axios, which said that Trump thought that Netanyahu was unnecessarily angering the Palestinians. During the course of the conversation, Trump pressed Netanyahu on the importance of arriving at a peace deal with the Palestinians.

During a Netanyahu visit to the White House in February 2017, shortly after Trump took office, the president called on Netanyahu during a news conference to “hold back” on settlement building.

White House adviser Jared Kushner, Trump’s Jewish son-in-law, and U.S. Middle East envoy Jason Greenblatt, who also is an Orthodox Jew, are leading Israel-Palestinian peace efforts. The announcement of a White House peace plan has been put on hold since Trump announced his recognition of Jerusalem at Israel’s capital and said he would move the U.S. Embassy to Jerusalem next month.

A senior White House official apprised of the details of the conversation told Axios that “The President has an extremely close and candid relationship with the prime minister of Israel and appreciates his strong efforts to enhance the cause of peace in the face of numerous challenges.”

The White House press secretary, Sarah Sanders, told Axios in response: “The president has great relationships with a number of foreign leaders, but that doesn’t mean he can’t be aggressive when it comes to negotiating what’s best for America.”