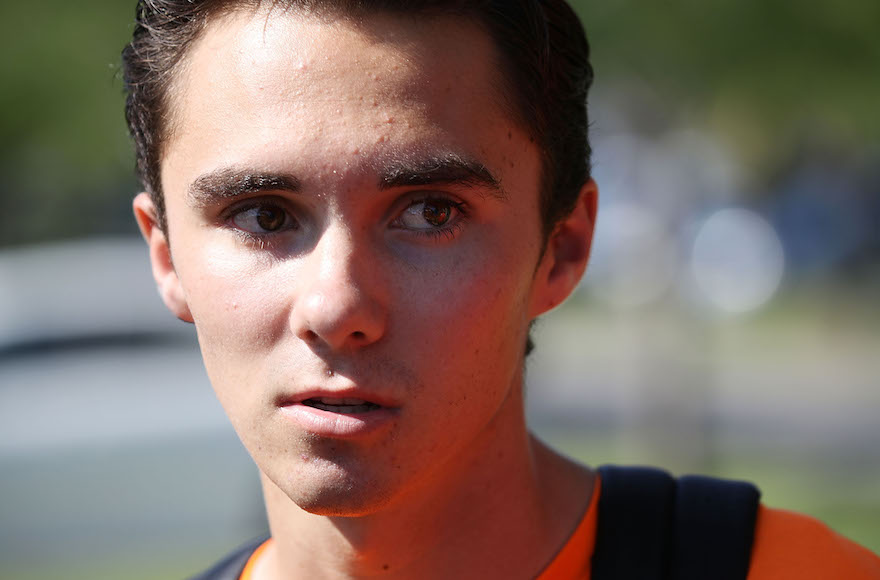 (JTA) — The Zionist Organization of America is urging a survivor of the Parkland school shooting to change the title of his forthcoming book, saying that by using the term “Never Again,” author David Hogg “trivializes the horrors of the Holocaust.”

Hogg, 18, who has emerged as one of the most vocal proponents of gun control in the wake of the deaths of 17 classmates and teachers at Marjory Stoneman Douglas High School in February, has a forthcoming book titled “#NeverAgain: A New Generation Draws the Line.”

Morton Klein, president of the ZOA, said in a statement Tuesday that Hogg is “co-opting and politicizing” a term closely associated with Holocaust remembrance.

“This inappropriate title displays an unkind and shocking insensitivity to Holocaust survivors, Jews, and all decent, human-rights-loving people around the world,” wrote Klein, who identifies himself as a child of Holocaust survivors in the statement. “Any attempts to compare the genocide of the Holocaust to modern domestic political issues in the US today is shameful and wrong.”

Klein emphasized that ZOA does not take a position on gun laws, and that his statement “should not be construed as in any way lessening our shock, outrage and pain regarding the Parkland school shooting.”

#NeverAgain became a Twitter hashtag for the Parkland survivors after one of Hogg’s classmates, Sarah Chadwick, used the phrase in a speech one week after the shooting.

Twitter users pointed out at the time that the phrase has been associated with Holocaust remembrance at least since the 1940s, and was inscribed on Holocaust memorials here and in Europe beginning in the 1950s. The phrase was popularized when the late Rabbi Meir Kahane used it as a rallying cry for the militant Jewish Defense League in the 1960s, and it has also became associated with the late Nobel laureate and Holocaust survivor Elie Weisel.

Hasia Diner, a professor of American Jewish history at New York University, is among Jewish observers unfazed by the students’ use of the phrase. While some may object to the phrase “Never Again” being re-appropriated for gun control, it “does not mean that reaction is appropriate or reasonable,” she told JTA last month.