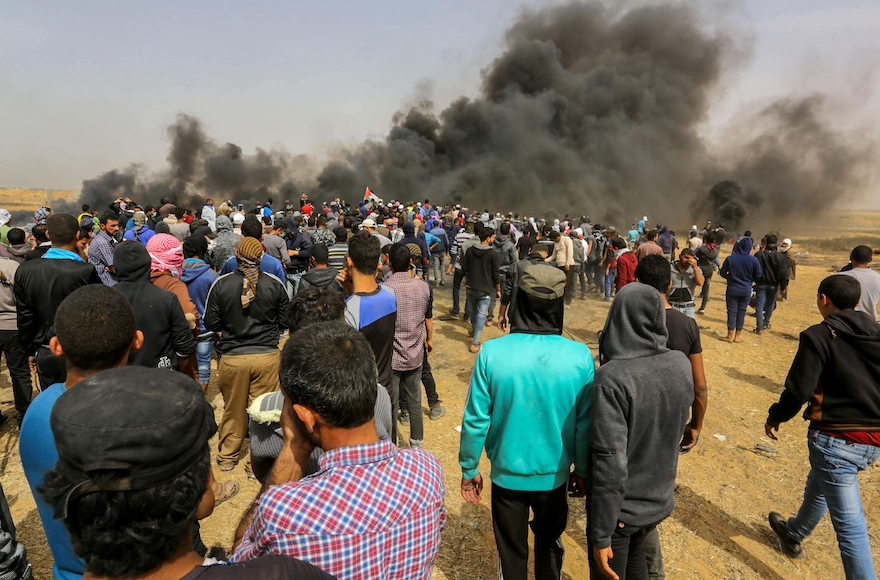 JERUSALEM (JTA) — A Palestinian journalist from Gaza who was shot by Israeli troops nearly two weeks ago during border protests has died of his wounds.

Ahmed Abu Hussein, 24, is the second Palestinian journalist who has died covering the Gaza border protests that started late last month. He died Wednesday in an Israeli hospital near Tel Aviv.

Hussein worked for a Gaza radio station and as a photojournalist for other Gaza news outlets.

Two days after he was shot in the stomach by an Israeli sniper, Hussein was given permission by Israeli officials to move from a Gaza hospital to one  in Ramallah, in the West Bank. Hussein later transferred to Israel’s Sheba Hospital.

Hussein was wearing a blue vest marked “Press” and a helmet marked “TV” when he was shot while standing amid a group of protesters.

Palestinian photojournalist Yasser Murtaja, 31, was shot and killed on April 6 during the second Friday of border protests. Murtaja, who the Israeli army said was operating a drone over the heads of Israeli troops, was wearing a vest emblazoned with the word “Press.”

The weekly protests at the Gaza-Israel border, called the March of Return, are scheduled to end on May 14, the 70th anniversary according to the Gregorian calendar of the birth of the modern State of Israel, which the Arab world calls the Nakba, or catastrophe.

Israel has faced international condemnation for its response to Palestinian demonstrations at the border. Thirty-nine Palestinians reportedly have been killed in rioting since the start of protests.