Macron to Congress: Have a plan in place to replace the Iran deal 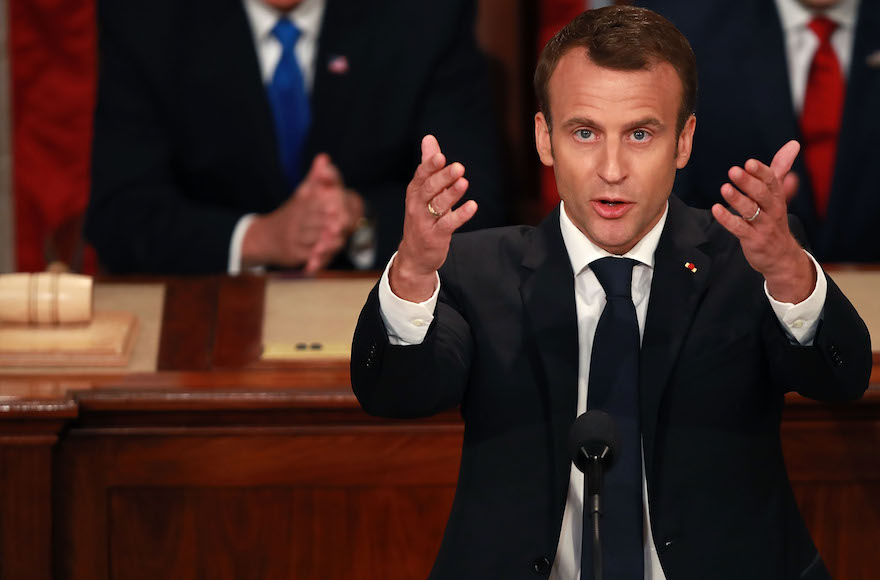 WASHINGTON (JTA) — President Emmanuel Macron of France said the Trump administration needed a plan to maintain the protections of the Iran deal should it pull out of the 2015 agreement.

“It is true to say that this agreement may not address all concerns and very important concerns,” Macron said Wednesday in an address to a joint meeting of Congress. “But we should not abandon it without having substantial and more substantial instead.”

Macron said France would not leave the deal, which swaps sanctions relief for a rollback in Iran’s nuclear program, also known as the Joint Comprehensive Plan of Action or JCPOA.

“France will not leave the JCPOA because we signed it,” he said. “Your president and your country will have to take in the coming weeks its own responsibilities.”

Trump must waive sanctions related to the deal by May 12 in order for the United States to stay in the deal. He has indicated he will likely not waive the sanctions.

Macron said in his speech that he had agreed to work with Trump on a “more comprehensive agreement.” Trump said Tuesday that he was “close” to an understanding with Macron, but it was not clear to what degree the U.S. leader was committed to working with his French counterpart.

Macron said the new agreement would involve preserving the Iran deal and adding new agreements in three areas that Trump has said the pact is lacking: addressing provisions that allow Iran in 2025 to go back to enriching uranium at levels closer to weapons-grade; Iran’s ballistic missile testing; and containing Iran’s military adventurism in the region.

Iran has rejected any amendments to the deal. It’s not yet clear what position other parties to the deal have on Macron’s proposed expansion of the agreement. Those parties are Britain, Germany, the European Union, Russia and China.

Macron said it was critical not to leave a vacuum in the region that could lead to war.

“Whatever the position of the United States will be, we will not leave the floor to the absence of rule, to the conflict of power in the idle east to the fuel of increasing tensions and [risk] of war,” he said.

Macron, whose visit with Trump was friendly to the point of effusive, nonetheless delivered a speech that was mostly a rebuke of Trump’s isolationism and his embrace of strident nationalism.

“We will not let the rampaging work of extreme nationalism shake a world full of hopes of global prosperity,” Macron said, extolling the multilateralism that Trump has frequently derided. “The United States is the one who invented this multilateralism. You are the one now who has to help preserve” it.

He also rejected trade wars, a means Trump has said could be useful to protecting the U.S. economy, and called for the preservation of working to address climate change.

“Let us work together in order to make our planet great again in order to create new jobs and new opportunities, ones safeguarding our earth,” Macron said.